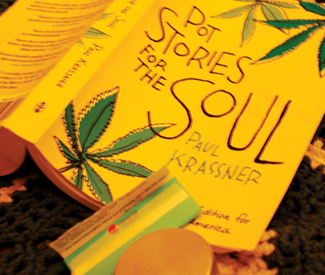 HERBWISE We have to be careful about how we are documenting marijuana. If we aren’t, future generations might be forgiven for thinking that cannabis culture occurred solely in courtrooms and during federal raids. After all, when do you read an account of a really great high, or the everyday reality of scoring from a dealer (and not going to jail for it, natch) off the pages of High Times?

For that reason alone — cultural documentation — alt-legend, Merry Prankster, and co-founder of the Yippie movement Paul Krassner must be commended for compiling Pot Stories for the Soul (Soft Skull Press, 240pp, $17.95). Krassner, who will be remembered by those older than I for his work with adult satire magazine The Realist, tapped 250 of his friends for their best cannabis stories. Results range from Mark Mothersbaugh’s tale of Devo’s Virgin Records-sponsored trip to Jamaica, to Kate Coleman’s account of working as Newsweek’s resident freak advisor and dealer in the mid-1960s, to random paragraph-long stoney-baloney kneeslappers. There’s also entire chapters devoted to anecdotes regarding Ken Kesey, Disneyland, and the illustrative writings of Krassner himself.

For those of us for whom life has moved past (or began after) the ’60s — when most of the tales take place — this book will read as a fascinating relic from a time gone by. Who among the publicly-traded Facebook generation is familiar with the hippie banana smoking craze or the 30,000 joints covertly mailed to New Yorkers on Valentine’s Day 1969 by Abbie Hoffman and the Yippies, packaged with helpful facts about marijuana drug studies and the tip that “you’ve had enough when you feel kind of nice and mellow”? It makes me wonder about what stories this generation will tell about our various bonehead moves and daring feats of activism.

Of course, it wasn’t quite as enlightened as the stoners thought at the time. There are some rather blatant racist and sexist flubs in Pot Stories that temper some authors’ claims of true counterculture-dom — a story regarding the participation of an Asian federal drug agent in the raid of Ken Kesey’s La Honda spaceship-cabin and an absolutely atrocious tale of the herb’s triumph over a coworker described as “an attractive woman who strove to live up to the stereotype of the ‘hot Latina,'” being notable examples. (Could we have sifted the stems and seeds out of that last one, Krassner?)

But today’s cannabis scene is the evolution of all this, the revelations and the lazy thinking that often go hand-in-hand in drug culture. Krassner has bundled up a panorama of what marijuana really signified for the Boomer set, the transcendence of societal norms and the reflection of them both.