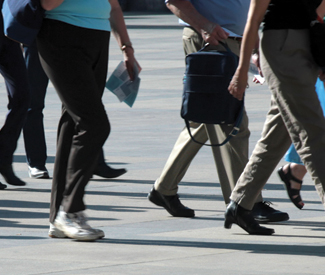 In May, a rip appeared in the social safety net that catches many of the people whose careers have been derailed by the continuing economic crisis when Californians lost eligibility for federal relief money under the Fed-Ed portion of the federal unemployment insurance extension program.

The news of the funding loss came to program recipients in a letter from the California Employment Development Department (EDD). According to data obtained from the EDD by the Bay Guardian, 1,994 San Franciscans were among the more than 92,000 people statewide who were cut from the unemployment roles earlier then expected, as the maximum length of benefits was reduced suddenly from 99 weeks to 79 weeks.

A nuance in the legislation that regulates state-by-state eligibly for Fed-Ed caused California’s early exit from the program, while individuals in other states with lower unemployment rates and stronger employment prospects remain eligible for longer coverage. New York state, with an unemployment rate of 8.5 percent, 2.4 points lower then California’s rate, continues to receive Fed-Ed funding.

Ironically, that’s because the recession has lingered longer here than elsewhere, and unemployed Californians are now being punished for being stuck for so long in such a slow economy.

“In order for a state to qualify for the Fed-Ed extension program you have to have a high unemployment rate and certainty California does have a high unemployment rate,” EDD Deputy Director Loree Levy told us. “It is just not 10 percent higher than what it has been over the last three years, and that is a requirement of the program. So the good news is that California’s economy is improving. It is unfortunate news for a lot of the long-term unemployed individuals who will now be doing without these extension benefits.”

But that’s little consolation to people in industries that have yet to recover, from construction to education to other government jobs.

While the city’s economy has been buoyed by tourism, technology, and a segment of pre-existing affluence that has weathered the economic crisis, the statewide the picture is much different. The state’s “improving economy” left more than two million Californians unemployed in May, 10.9 percent the state’s workforce.

When statewide unemployment ticked up slightly in April, the state’s three-month average registered as 8 percent higher than the three-year average, missing by a statistical sliver the federal program’s threshold 10 percent increase. This triggered the BLC, which tracks unemployment across the nation, to notify the California EDD that funding of the Fed-Ed program would cease.

The trouble with this metric as a benchmark for benefits dispersion is when discouraged workers self identify as having stopped looking for a job, they are no longer included in the unemployment figures used by the BLS to determine Fed-Ed eligibility. If a fraction of these workers had identified themselves as seeking work, the Fed-Ed relief would have continued to flow into California.

If the state edges back across that threshold in the coming months, Fed-Ed money will flow into the state again, but those recently cut from the unemployment roles who did not exhaust their Fed-Ed eligibility time will not qualify to be re-added to the program.

The program’s loss could have a significant impact on the state’s economy going forward.

“In the three years since Fed-Ed was passed, more than 912,00 people in California have relied on the benefits,” Levy says. “That has brought $5 billion of federal funds into the ailing state economy. It has had a tremendous impact on the economy and when you add in a multiplying effect from money spent out there from these benefits on local businesses, it can be almost a $10 billion effect on the economy.”

As the economic crisis drags on, federal stimulus and relief programs that were planned with a short downturn in mind dry up, a political climate of austerity in government spending has taken its place. Individuals caught in the fallout of the economic crisis increasingly find themselves with nowhere to turn.

Only one out of three unemployed workers statewide currently receive any unemployment benefits, and before the end of Fed-Ed, a staggering 700,000 people who had been receiving benefits during the economic crisis exhausted the previous maximum 99 weeks without finding work.

“What happens when we require people to go out and get jobs when there are no jobs? That’s a nightmare. People are being cut off with no place to turn,” Princeton professor of economics Paul Krugman said at the Commonwealth Club of San Francisco last month. “Benefits that are emergency benefits should not depend on some arbitrary timeline for the individual but for the duration of the emergency. If we have a flood, you don’t say ‘We are only going to help flood victims for three days.’ We help them until the flood recedes.”

Of those Californians who still do receive an unemployment check, over half have been out of work for more than six months, the period at which normal state funding ends and federally emergency extension programs take over. The remaining federal unemployment extension program enacted during the economic crisis — the Emergency Unemployment Compensation program — is set to phase out on Dec. 23 of this year. That is bad news for Californians locked out of the labor market who have exhausted the normal six months of state funded benefits.

Responding to the release of May’s week jobs report, House Minority Leader Nancy Pelosi (D-SF) said the report, “Makes clear that we have more work to do to restore security and opportunity for the middle class. The time is now for Republicans to join us in moving forward on behalf of the middle class.”

Without the renewal by Congress of federal unemployment extension deep in the presidential election cycle, another larger surge in people booted from the unemployment roles will be locked in competition for the state’s paltry offering of new job creation — a punishing musical chairs game with real life stakes.