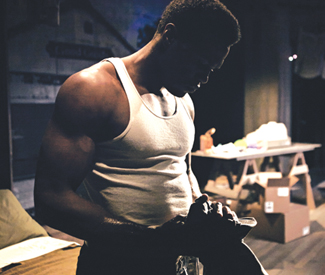 THEATER A general store in a factory town is the deceptively concrete setting for playwright Christina Anderson’s purposefully nebulous drama, which conflates a range of 20th century African American experiences in a supernatural tale of characters and a town variously “possessed.”

Crowded Fire (which produced the world premiere of Anderson’s DRIP in 2009) takes the premise and runs with it, artistic director Marissa Wolf helming the production with a sure grasp of Anderson’s fluid structure, where time (“between 1961 and 1994”), place (“the side pocket of America”), and position (social, sexual or otherwise) are all on the move and yet passingly specific, as in some Heisenberg Uncertainty Principle of history and identity.

As the story opens, Good Goods proprietor Stacey Good (Yahya Abdul-Mateen II) has recently retuned to town to take over from his father — the original Good — who we learn fled under vague circumstances seemingly connected to a recent “invasion” that has left this exclusively African American community in some sense (again purposely vague) occupied.

Meanwhile, the store itself is contested terrain. Longtime employee Truth (David E. Moore) holds a grudge against Stacey, who was supposed to be born a girl — promised to Truth by Good-the-father along with the keys to the store. But as a male heir, Stacey is instead Truth’s boss (although, as we learn in some of the clunky exposition at the top of the play, he’s obligated to keep Truth on the payroll no matter how ill tempered he may get).

The allegorical air of this premise grows apace with the arrival of Patrick, nicknamed Wire (Armando McClain), and Patricia (an assured and persuasive Mollena Williams), his twin sister with a stalled career as a nightclub comedian. Patricia has just returned this day — Wire’s birthday but not yet hers, since she was born after midnight — with a runaway bride named Sunny (a fittingly bright and captivating Lauren Spencer), who she met on the bus ride to town. Sunny’s innocent, childlike radiance captures Truth’s ardor but it’s soon clear she’s already smitten with Patricia.

As it further becomes obvious there’s some lingering romantic history between Patricia and Stacey, as well as between Stacey and childhood best friend Wire, a horrible accident at the local factory intrudes. The outcome of this tragedy is the supernatural arrival of another member of the community, whose family has earned some resentment for having gone AWOL during the recent invasion. As a local medicine man named Waymon (Anthony Rollins-Mullens), channeling the spirit of the Hunter Priestess, arrives to sort the matter out, history and solidarity, ownership and desire, masculinity and femininity, tyrannical convention, and casual nonconformity are all mixed ever more thoroughly together.

Without giving away too many details of the plot’s central twist, it’s fair to say that who gets to possess whom and under what circumstances (that is, with or without the consent of the other party) is a question that rises and sinks amid the play’s convoluted action like a stone skipping across a roiling pond. If Anderson sacrifices some dramatic coherence along the way, there are productive questions thrown up merely by flouting a more realistic time/place continuum, since not making an issue of the characters’ fluid sexuality, for example, is already to draw attention to the usual regime while toppling its violent logic.

Crowded Fire’s production at Boxcar Playhouse is somewhat erratically paced and has sightline challenges, but it offers scope for some nicely tailored performances (with the most consistent work coming from Williams and Spencer, who anchor the proceedings with fine, vital turns). Emily Greene’s half-open half-realistic scenic design, buttressed by Rebecca Longworth’s mix of still and video backdrops, meanwhile strives with limited success to capture the play’s particular mix of naturalism and supernaturalism.

That mixture is ultimately both a weakness and strength. The action can feel too mysterious, contradictory and diffuse to be as hard-hitting as it wants to be. But the boldness of Anderson’s formal strategy and its deliberately spongy sense of history also invite an invigorating play between necessity and possibility.