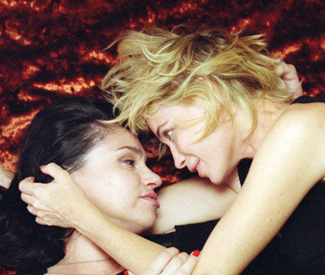 It probably depended a little on who you were and what you’d seen lately that made you feel grateful to be coinciding with this point on the timeline of queer cinema. For me, it was Lilies (1996) and Go Fish (1997), and All Over Me (1997) and Beautiful Thing (1996), and every other gay teen romance, and any totally f***ed up thing Gregg Araki chose to put onscreen (including 1995’s Doom Generation, billed as “a heterosexual film by Gregg Araki,” which made straight look like a fairly provisional state of being). It was kind of like irony or porn — I couldn’t exactly define it, but I was pretty sure I knew it when I saw it while bingeing, mid–gay adolescence, on whatever the 1990s had to offer in the way of LGBT experience on film. “It” being this thing called New Queer Cinema, a term that film critic and scholar (and past Guardian contributor) B. Ruby Rich had coined in a 1992 essay in the British film journal Sight & Sound.

Rich, these days teaching in UC Santa Cruz’s Film and Digital Media Department, offered up the idea of New Queer Cinema as a way to frame a ragged-edged genre that she saw emerging. Populating it were films that told unfamiliar, upsetting, outrageous, and sometimes deeply lyrical stories of queer experience, forcing a more complicated picture onto the screen. As many of them gained a cultural foothold (seldom reaching deep into the mainstream, but drawing respectable numbers of art-house-goers), they made a space around themselves for more such films to follow their unsettling examples.

Over the next decade and beyond, the genre, and the larger, disparate queer culture, welcomed a world of untold stories; films like My Own Private Idaho and later Velvet Goldmine (1998) and Boys Don’t Cry (1999) entered the popular culture by way of some combination of star and story power; and one morning we woke up to the sight of significant swaths of the country heading to the multiplex to watch a swoony, gloomy tale of two cowboys in love.

Now, somehow, Brokeback Mountain (2005) is starting to seem like a long time ago, and you could say that New Queer Cinema has both evolved and devolved, a fact reflected in the rom-com-packed LGBT section of your friendly neighborhood video store as well as in each passing year’s Frameline festival catalog. This year, the San Francisco International LGBT Film Festival offers the opportunity to compare and contrast, casting its eyes back on the genre 20 years after Rich pronounced its existence and sketched its parameters.

In addition to presenting Rich with its annual Frameline Award, the fest has programmed a retrospective of four films that offer a sense of New Queer Cinema’s expansive scope and permeable borders: Alex Sichel’s dark-and-light, riot grrrl music–infused All Over Me (costarring a baby-faced Leisha Hailey from The L Word); Ana Kokkinos’s Head On (1998), about a reckless but closeted young man living in a tight-knit Greek Australian community; Gregg Araki’s violent, trashily romantic, HIV-inflected road movie The Living End (1992); and Cheryl Dunye’s experimental mix of documentary and dyke drama The Watermelon Woman (1996). (In 2012’s Mommy Is Coming, also screening, Dunye adds to the mix Berlin sex clubs, explicit taxicab-backseat role play, and a parent-child dynamic likely to leave you flinching in horror.)

Elsewhere in the fest, French writer-director Virginie Despentes’s Bye Bye Blondie has a mosh pit soundtrack and follows, clumsily, Araki’s frenetic and unrestrained example. Béatrice Dalle (1986’s Betty Blue) and Emmanuelle Béart (2002’s 8 Women) play former teenage punk rock sweethearts who met in a mental institution and reunite after a long estrangement to reenact the past and rip open old wounds. A high point, though not for their relationship, occurs when Dalle’s slightly unhinged character tells a woman at a highbrow cocktail party, populated by Paris’s public-intellectual set, that her dress is sectarian, before physically assaulting another guest. Cloying and soap operatic, offering the gauzy fantasy fulfillment of a Harlequin Romance, Nicole Conn’s A Perfect Ending nevertheless earns points for its premise of an uptight housewife who employs the services of a call girl — and for casting Morgan Fairchild as a madam who uses her Barbie collection as a staffing organizational tool.

Other queer stories are more successfully delineated. Aurora Guerrero’s coming-of-age tale Mosquita y Mari, which screened at the SF International Film Fest in April, soulfully and subtly captures the ambiguous friendship that develops between two Latina high schoolers struggling with unspoken feelings as well as pressures both familial and financial. In Joshua Sanchez’s Four, adapted from a play by Christopher Shinn, Fourth of July fireworks and a mood of lonely isolation serve as a backdrop to four disparate individuals’ uncomfortable attempts to find physical and emotional connection. Stephen Cone’s The Wise Kids is set in and around a Southern Baptist church in Charleston, South Carolina, and tracks a trio of teenagers as they sort out the facts of their religious and sexual identities.

There’s a startlingly small quantity of queer baby-making going on in this year’s fest compared with recent years, and the family proposed in writer-director Jonathan Lisecki’s romantic comedy Gayby (as well as Ash Christian’s Petunia) is not necessarily nuclear or easy to encapsulate in kindergarten on “Let’s draw our family tree!” day, marrying the concept of queer family to the Heather-has-two-mommies narrative. The film’s gay-boy Matt and straight-girl BFF Jenn decide that it’s time to settle down and start a family together, but reject the idea of turkey basting or consulting a fertility specialist in favor of comically awkward, highly unerotic, goal-oriented sexual intercourse.

Come to think of it, their method could resonate with the procreation-only, can’t-wait-to-be-raptured crowd, who might be less enthusiastic when the pair switch to good old-fashioned DIY insemination and Matt’s friend Nelson (a scene-stealing Lisecki) brings over a container of holy cat cremains to sanctify the proceedings. Either way, with queer spawning sometimes serving as the rope in a tug-of-war argument about heteronormativity, queer identity, transgression, and basic rights, an unruly rom-com about queer family planning is a fitting entry in a genre and a festival that have both grown into panoramic representations of the queer world.