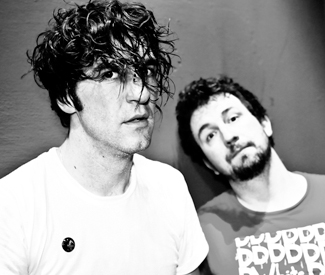 MUSIC “The record couldn’t be called anything else,” says Japandroids’ Brian King of the band’s sophomore LP, Celebration Rock, released last Tuesday on Polyvinyl Records. “It just seemed to sum up — not just the album, but the sound of the band as a whole.”

The Vancouver duo — comprised of King on guitar and David Prowse on drums, both provide vocals — has a lot to celebrate. Japandroids’ critically acclaimed 2009 debut, Post-Nothing, began as a swan song of sorts, made solely for the purpose of having a record to take on the road. “There was certainly a sense when we were touring — which is probably one of the reasons we toured for so long — that when the touring stops, the band would just end,” says King. “It wasn’t actually until the end of 2010 that we realized there were no more shows to play. If we wanted to keep touring, we had to make another record. So that’s what we did.”

Bursting with restless energy and fervent guitar hooks, Post-Nothing was an ebullient reflection of raging, fleeting, glorious youth. It captured the sensation of shotgunning beers with your best buds at the moment the apocalypse arrives. On Celebration Rock, King and Prowse put that feeling into words.

“In the old days, I think we viewed lyrics and vocals as secondary components of the band and the songs,” King explains. “Our primary focus was writing instrumentals that were fun to play and had lots of interaction.” Post-Nothing opener “The Boys Are Leaving Town,” is a raucous four-minute anthem with only two lines.

“We had two or three hundred shows in between the first record and the second record,” says King. “When you play all those shows and you’ve seen all those people singing your songs back to you and hear how much they love them, you realize that the vocals and the lyrics aren’t necessarily stupid and they shouldn’t necessarily be secondary.” “Kiss away your gypsy fears / And turn some restless nights to restless years,” King commands on “Fire’s Highway.” On “Younger Us,” he asks, “Remember saying things like We’ll sleep when we’re dead / And thinking this feeling was never gonna end?”

The instrumentals that were the focal point on Post-Nothing are cleaner, brighter, more epic on Celebration Rock. “A song wasn’t really done until it was what we would call a blitzkrieg from start to finish, which means there’s nothing more you can do to make it any more fun or spectacular or impressive to perform in front of an audience,” King tells me.

Nonstop guitar shredding by King and thunderous percussion from Prowse make the 35-minute, eight-song album feel wickedly fulfilling. “It’s very, very dense,” explains King. “I’m guessing it doesn’t have any less riffs or any less lyrics than any other record. We just crammed it all in with the idea of not wasting even a second.”

“Not wasting a second” are words Japandroids live by. With an outrageously energetic live show and commitment to endless touring, King and Prowse seem to subsist solely on a passion for delivering uproarious anthems to their fans. “Lack of sleep, lack of eating, over-drinking — it’s actually quite hard physically and, at times, it can be very challenging,” says King. “[But] there’s nothing that we would rather be doing than playing in a touring rock and roll band.”

On the album, King fires off verses about long nights and passing moments likely inspired by a hard-and-fast lifestyle of blazing through cities and leaving them in the dust. If Celebration Rock‘s most boisterous track, “The House That Heaven Built,” is any indication, Japandroids’ blitzkrieg is far from over. “If they try to slow you down,” Kind hoarsely declares, “Tell ’em all to go to hell.”