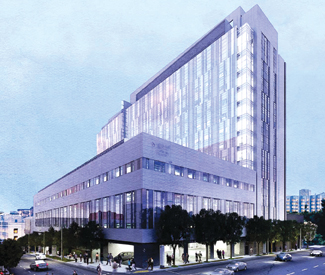 The controversial and long-awaited proposal by California Pacific Medical Center (CPMC) to build a 550-bed luxury hospital atop Cathedral Hill and to rebuild St. Luke’s Hospital has finally arrived at the Board of Supervisors — where it appears to have little support.

So far, not one supervisor has stepped up to sponsor the deal, and board members say it will have to undergo major changes to meet the city’s needs. “There are still a lot of questions that remain,” Sup. David Campos told us, citing labor, housing, community benefits, and a long list of other issues that he doesn’t believe CPMC has adequately addressed. “It tells me there’s still more work to be done.”

CPMC, which is Sacramento-based nonprofit corporation Sutter Health’s most lucrative affiliate, has been pushing the project for almost a decade. Its advocates have subtly used a state seismic safety deadline for rebuilding St. Luke’s — a hospital relied on by low-income residents of the Mission District and beyond — as leverage to build the massive Cathedral Hill Hospital it envisions as the Mayo Clinic of the West Coast.

But the project’s draft environmental impact report shows the Cathedral Hill Hospital would have huge negative impacts on the city’s transportation system and exacerbate its affordable housing crisis. And CPMC has been in a pitched battle with its labor unions over its refusal to guarantee the new jobs will go to current employees or local residents and be unionized. There are also concerns with the market power CPMC will gain from the project, how that will affect health care costs paid by the city and its residents, and with the company’s appallingly low charity care rates compared to other health care providers (see “Lack of charity,” 12/13/11).

CPMC had refused to budge in negotiations with the Mayor’s Office under two mayors, for which Mayor Ed Lee publicly criticized the company’s intransigence last year. But under pressure from the business community and local trade unions who support the project, Lee cut a deal with CPMC in March.

That development agreement for the $2.5 billion project calls for CPMC to pay $33 million for public transit and roadway improvements, $20 million to endow community clinics and other social services, and $62 million for affordable housing programs, nearly half of which would go toward helping its employees buy existing homes.

While those numbers seem large, community and labor leaders from San Franciscans for Healthcare, Housing, Jobs and Justice (SFHHJJ), which formed in opposition to the project, say they don’t cover anywhere near the project’s full impacts. And given that CPMC made about $180 million in profit last year in San Francisco alone — money that subsidizes the rest of Sutter’s operations — they say the company can and should do better.

“This is about standing up to corporate blackmail,” SFHHJJ member Steve Woo, a community organizer with the Tenderloin Neighborhood Development Corporation, told us.

CPMC is perhaps the most high-profile project the board will consider this year, one that will impact the city for years, so the political and economic stakes are high.

The Planning Commission voted 5-1 on April 26 to approve the deal and its environmental impact report, citing the project’s economic benefits and the looming deadline for rebuilding St. Luke’s. The Board of Supervisors was scheduled to consider the appeal of that decision on June 12 (after Guardian press time), but activists say supervisors planned to continue the item until July 17.

In the meantime, the board’s Land Use Committee has scheduled a series of hearings on different aspects of the project, starting June 15 with a project overview and presentation on the jobs issue, continuing June 25 with a hearing on its impacts to the health care system. Traffic and neighborhood impacts would be heard the next week, and then housing after that.

Calvin Welch, a progressive activist and nonprofit affordable housing developer, said the project’s EIR makes clear just how paltry CPMC’s proposed mitigation measures are. It indicates that the project’s 3,000 new workers will create a demand for at least 1,400 new two-bedroom housing units. Even accepting that estimate — which Welch says is low given that many employees have families and won’t simply be bunking with one another — the $26 million being provided for new housing construction would only create about 90 affordable studio apartments.

“We’re going to end up, if we want to house that workforce, subsidizing CPMC,” Welch told us.

Compounding that shortcoming is the fact that the Cathedral Hill Hospital is being built in a special use district that city officials established for the Van Ness corridor — where there is a severe need for more housing, particularly affordable units. The SUD calls for developers to build three square feet of residential for every square foot of non-residential development.

“That would require building 3 million square feet of residential housing with this project,” Welch said. “We don’t think $26 million meets the housing requirement for this project, let alone what was envisioned by this [Van Ness corridor] plan.”

SFHHJJ is calling for CPMC to provide at least $73 million for affordable housing, with no more than 20 percent of that going to the company’s first-time homebuyer assistance program. That assistance program does nothing to add to the city’s housing stock and critics call it a valuable employee perk that will only increase the demand for existing housing — and thus drive up prices.

But the business community is strongly backing the deal, and the trade unions are expected to turn out hordes of construction workers at the hearing to make this an issue of jobs — rather than a corporation paying for its impacts to the community.

“After a decade of discussion, debate and compromise, the city’s departments, commissions, labor, business and community groups all agree on CPMC,” San Francisco Chamber of Commerce President Steve Falk wrote in a June 8 e-mail blast entitled “Message to the Board of Supervisors: Don’t Stand in the Way of Progress.”

“The fate of our city’s healthcare infrastructure now lies solely with the Board of Supervisors,” the Chamber says. “When it comes time to vote, let’s insist they make the right choice.”

Yet it’s simply inaccurate to say that labor and community groups support the deal, and both are expected to be well-represented at the hearings.

Economic justice issues related to health care access and costs are another potential pitfall for this project. SFJJHH activists note that no supervisors have signed on to sponsor the project yet — which is unusual for something this big — and that even the board’s most conservative supervisors have raised concerns that the city’s health care costs aren’t adequately contained by the deal.

“There’s a significant amount of dissatisfaction with the deal, even among conservatives,” SFJJHH member Paul Kumar, a spokesperson for the National Union of Healthcare Workers, told the Guardian.

On the progressive side, a big concern is that CPMC is proposing to rebuild the 220-bed St. Luke’s with only 80 beds, which activists say is not enough. And even then, CPMC is only agreeing to operate that hospital for 20 years, or even less time if Sutter’s fortunes turn around and the hospital giant begins losing money.

CPMC Director of Communications Kathryn Graham, responding by email to questions and issues raised by the Guardian, wrote generally and positively about CPMC and the project without addressing the specific concerns about whether housing, transportation, and other mitigation payments are too low.

On the jobs issue, she wrote, “Our project will create 1,500 union construction jobs immediately—and preserves and protects the 6,200 health care professional jobs that exist today at the hospitals. Currently, nearly 50 percent of our current employees live in San Francisco. During the construction phase of this project, we are committed to hire at least 30 percent of workers from San Francisco. We will create 500 permanent new jobs in just the next five years—200 are guaranteed to be local hires from underserved San Francisco neighborhoods. We don’t know where you got the ridiculous idea that our employees must reapply for jobs at our new hospitals. That is incorrect.”

Yet CPMC has resisted requests by the California Nurses Association and other unions to be recognized at the new facility or to agree to card-check neutrality that would make it easier to unionize. And union representatives say CPMC has offered few assurances about staffing, pay, seniority, and other labor issues.

As one CNA official told us, “If they aren’t going to guarantee jobs to the existing employees, those are jobs lost to the city.”

“We’re giving Sutter a franchise over San Francisco’s health care system for 30 to 40 years, so we should ensure there are basic worker and community protections,” Kumar said.

Welch and other activists say they believe CPMC is prepared to offer much more than it has agreed to so far, and they’re calling on the supervisors to be tougher negotiators than the Mayor’s Office was, including being willing to vote down the project and start over if it comes down to that.

“They make too much money in this city to just leave town,” Welch said of CPMC’s implied threat to pull out of San Francisco and shutter St. Luke’s. “It’s bullshit.”