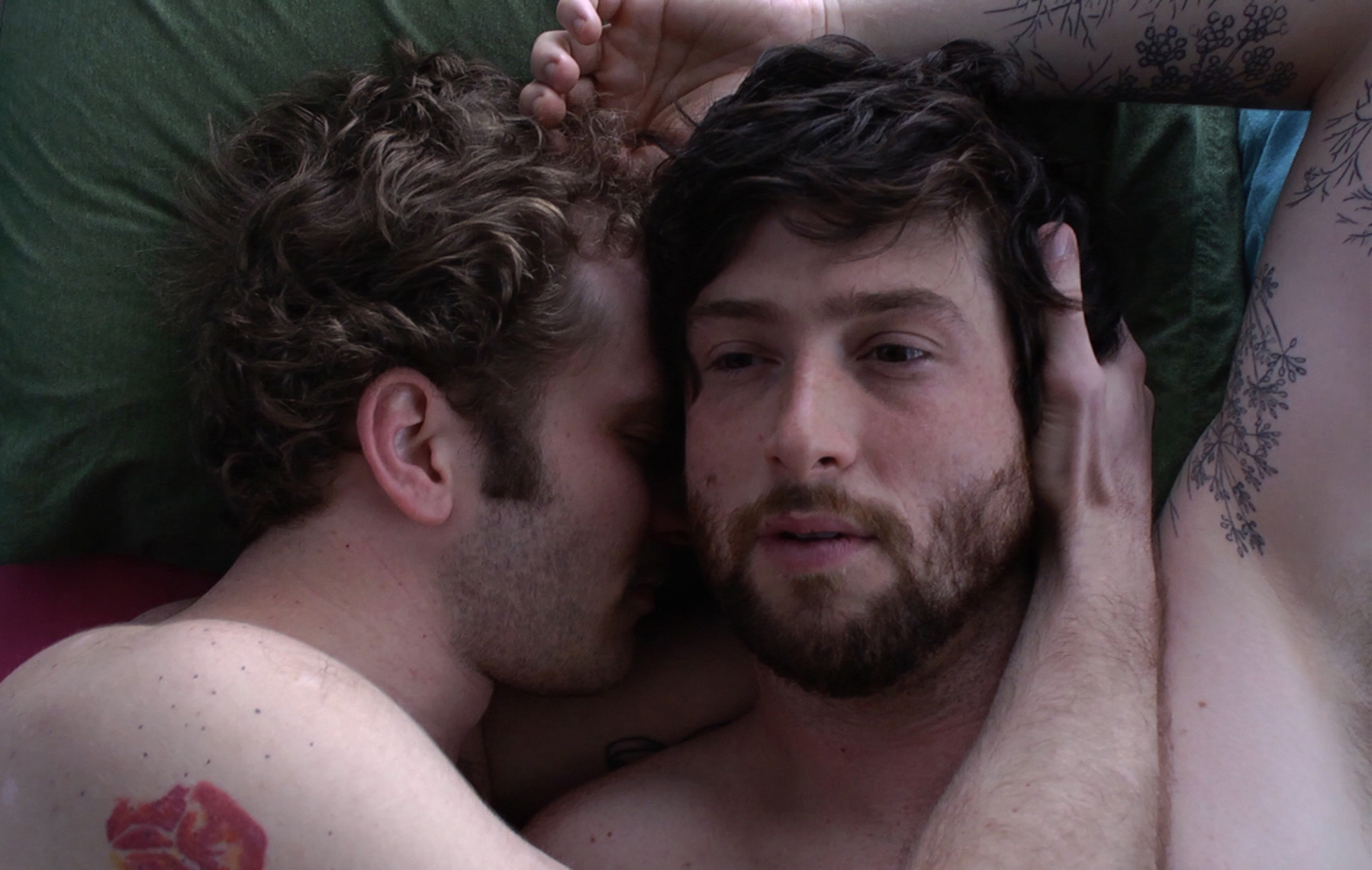 For more on this year’s Frameline Film Festival, including times and prices, go to www.frameline.org

Mixed Kebab (Guy Lee Thys, Belgium/Turkey, 2012) A My Beautiful Launderette-type mix of culture clashes ethnic, religious, sexual, and otherwise, Guy Lee Thys’ Belgian-Turkish feature risks over-contrivance, but comes out a tasty blend of narrative and thematic ingredients. Ibrahim, a.k.a. Bram (Cem Akkanat), is the apple of his émigré Antwerp family’s eye, but then he’s kept his hunky-gay-man-at-large double life entirely off their conservative Muslim radar. Even as his best-friendship with Kevin (Simon Van Buyten) looks set to turn into something much more, he goes along with plans for an arranged marriage to Elif (Gamze Tazim), an educated cousin desperate to escape the gender restrictions of Turkey and her father’s home. Several factors will erode those best-laid plans, however, not least the prying eyes of Bram’s black-sheep brother Furkan (Lukas De Wolf), who goes from rebellious juvenile delinquency to obnoxious moral fundamentalism under a far-right local imam’s influence. Thu/14, 10pm, Castro. (Dennis Harvey)

North Sea Texas (Bavo Defurne, Belgium, 2011) Growing up is never easy — especially when you know who you are and who you love from a tender young age, and live in a sleepy Belgium coastal hamlet in the early ’70s. Sexual freedom begins at home, as filmmaker Bavo Defurne’s debut feature opens on our beautiful little protagonist, Pim — a melancholy, shy, diligent soul who has a talent for drawing, a responsible nature, and a yen for ritual dress-up in lipstick and lace. He has an over-the-top role model: an accordion-playing, zaftig mother who has a rep as the village floozy. Left alone far too often as his mom parties at a bar named Texas, Pim takes refuge with kindly single-mom neighbor Marcella, her earnest daughter, and her sexy, motorcycle-loving son, Gino, who turns out to be just Pim’s speed. But this childhood idyll is under threat: Gino’s new girlfriend and a handsome new boarder at Pim’s house promise to change everything. Displaying a gentle, empathetic touch for his cast of mildly quirky characters and a genuine knack for conjuring those long, sensual days of youth, Defurne manages to shine a fresh, romantic light on a somewhat familiar bildungsroman, leaving a lingering taste of sea salt and sweat along with the feeling of walking in one young boy’s very specific shoes. Fri/15, 9:30pm, Castro. (Kimberly Chun)

I Want Your Love (Travis Mathews, US, 2011) Local director Travis Mathews’ first full-length feature — produced by porn impresario Jack Shamama and the good, pervy folks at Naked Sword — is so beautifully shot, edited, paced, and true to life for a certain young, scruffy, artsy fag demographic (not to mention brimming with explicit sex scenes) that you probably won’t notice that hardly anything happens plotwise. A cute performance artist named Jesse, played by one of our top performance artists also named Jesse, is getting ready to move back to Ohio due to those all-too-familiar San Franciscan money woes, but maybe also to forge some deeper connection to life. That’s about it. The true joy here is seeing most of the Bay Area’s gay underground arts scene nailing peripheral roles: Brontez Purnell hilariously steals the movie, cute naked gay boys abound, and the whole thing really does come off as a lovely West Coast boho version of last year’s UK indie hit Weekend, with more fog and condoms. Sun/17, 9:30pm, Castro. (Marke B.)

Beauty (Oliver Hermanus, South Africa/France, 2011) The destructive toll of repression, psychological and otherwise, is vividly illustrated in Oliver Hermanus’ stark minimalist drama. Francois (Deon Lotz) is a middle-aged Afrikaaner husband and father living an entirely concealed double life: the hidden part acted out in secret orgies with other men as successful, privileged, and closeted as he. (When one member of this very exclusive “club” brings a black lover along, the reaction makes clear how sharp South Africa’s race/class divisions remain.) Francois’ control of that schizophrenic existence is masterful — until he spies Christian (Charlie Keegan), a model-handsome new corporate colleague, a close friend’s son, and eventually his younger daughter’s boyfriend. Despite all those red flags, his obsession builds toward a shocking, uncontrollable explosion. A deliberately chilly and unpleasant work of art à la Michael Haneke, Beauty weighs the consequences of living a lie, and finds them aptly repellent. Mon/18, 9:30pm, Castro. (Harvey)

My Best Day (Erin Greenwell, US, 2012) Sans name stars or a catchy plot hook, Erin Greenwell’s indie comedy attracted little attention at Sundance, and it’s kinda buried in the Frameline program — a pity, since its uncontrived, even-handed balance of gay male, lesbian, and straight protagonists would have been perfect for a higher-profile slot. Not to mention that it’s totally goofy, funny, surprising, and sweet. Over the course of one Fourth of July in Bangor, Penn., a motley assortment of hapless but endearing characters circle one another warily, desiring everything from family reunion to crush-realization to acknowledgement of a closeted relationship. They’re all delightful, although there’s no getting around the wholesale scene stealing of Ashlie Atkinson, whose motorcycle- and slutty local-girl-covetous refrigerator-repair dyke dials down her “Muffler” in Another Gay Movie (2006) to create a character of nuanced comic beauty. My Best Day is unpretentious but so low-key skillful and open-hearted that in the end it feels ever-so-slightly profound. Tue/19, 7pm, Elmwood; June 20, 9:30pm, Castro. (Harvey)

Keep the Lights On (Ira Sachs, US, 2012) At times almost too intimately painful to watch, Ira Sachs’ autobiographical drama charts the long-term disintegration of a relationship between a filmmaker and a bright, adored but addicted and duplicitous soulmate. When expat Danish documentarian Eric (the exceptional Thure Lindhardt) first hooks up with publishing-biz newbie Paul (Zachary Booth), they have sexual chemistry and more. But the Manhattan life they build together is increasingly hole-riddled by Paul’s mood variances, unexplained absences, and other signs of serious drug usage. Sachs lets the narrative be controlled by the empty spaces such a habit leaves for concerned loved ones — time and circumstances often leap forward without full explanation, placing us in Eric’s frustrated position as a man in love with a man whose returned love is both genuine and entirely untrustworthy. Keep the Lights On is unabashedly difficult viewing. But it’s also the best (as well as the first gay-focused) feature Sachs has made since his equally unsettling 1997 debut The Delta. June 20, 6:30pm, Castro. (Harvey)