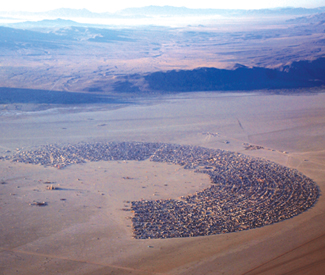 Burning Man is more popular than ever, judging by a demand for tickets that far exceeded supply this year, after selling out last year for the first time in its 26-year history — and now this year’s event will be far bigger than ever.

The Bureau of Land Management, which manages the Nevada desert where burners build Black Rock City every August, has set a population cap for Burning Man at 60,900, an increase of more than 10,000 over previous events.

BRC was denied the multi-year event permit it sought, but as it struggles to meet demand for this increasingly popular countercultural institution, BLM honored BRC’s late request for more people than the 58,000 it had sought for this year.

“After further discussions, there were requests for a bit more,” Cory Roegner, who oversees the event from BLM’s district office in Winnemucca, told us. Asked why BRC sought the population bump, he said, “The more people they can have, the better.”

BLM has been processing BRC’s lengthy environment assessment and its request for a five-year permit that would allow the event to grow steadily from 58,000 to 70,000 people in 2016. The cap for this year could have been set as low at 50,000, creating some drama around this announcement, but the agency instead issued a single-year permit with a population cap of 60,900.

BRC was placed on probation last fall after violating its 50,000-person cap by a few thousand people each on Sept. 2 and 3, and BLM rules limit groups on probation to a single-year permit. BRC has appealed the status to the Interior Board of Land Appeals, which has not yet acted on it or answered Guardian inquiries.

“Unless we do hear back from them, Black Rock City would be precluded from a multi-year permit,” Roegner told us.

He also said that if BRC violates the population cap for a second year in a row, it could be barred from holding future events, although the high population cap should mean that won’t be a big problem this year, clearing the way for Burning Man’s steady growth through at least 2016.

“Based on the evaluation [of this year’s event], we will consider a multi-year permit going to 2016,” Roegner told us.

BRC has already sold 57,000 tickets and will give away thousands more to art collectives, staff, and VIPs. But the cap is based on a daily population count and BRC board member Marian Goodell said the event never has all attendees there at once.

She said staying below the cap this year shouldn’t be difficult given that many of those who build the city and work on the major art pieces leave before the final weekend when the eponymous Man burns. “Usually at least 6,000 leave before we hit the peak. Sometimes more on dusty, wet, or cold years,” she told us.

It could have been a lot more difficult. BLM officials had told the Guardian in April that they were considering keeping last year’s population cap of 50,000, which could have presented BRC with a logistical nightmare and/or ticket-holder backlash in trying to stay under the cap.

“The issue between us and the BLM continues to be the population cap,” Burning Man founder Larry Harvey told the Guardian.

Harvey, Goodell, and others with BRC took a lobbying trip to Washington DC in late April trying to shore up political support for the event and its culture, arguing that it has become important for artistic and technical innovation and community building rather than just a big party.

Harvey told us he believes that Burning Man could grow to 100,000 participants, although he conceded that would need further study and creative solutions to key problems such as getting people to and from the isolated location accessed only by one highway lane in each direction.

“We think we could go to 100,000 if it was measured growth, carefully planned,” Harvey said.

On the transportation question, he said, “it’s a question of flow.” Right now, participants arriving or leaving on peak days often wait in lines that can take four hours or more.

“We’ve talked to engineers that have proposed solutions to that,” Harvey said of the transportation issue, although he wouldn’t discuss possible solutions except to say, “You could exit in a more phased fashion.”

Roegner said that was one of the big issues identified in the EA. “We are taking a closer look at a couple items this year, traffic being one,” he said. Another one is the use of decomposed granite, which is placed under flaming artworks to prevent burn scars on the playa, and making sure it is properly cleaned up each year.

BRC was facing a bit of a crisis in confidence after this year’s ticket debacle, when a new lottery-based ticket distribution system and higher than expected demand left up to two-thirds of burner veterans without tickets. The resulting furor caused BRC to abandon plans for a secondary sale and instead sell the final 10,000 tickets through established theme camps, art collectives, and volunteers groups.

“It’s pretty obvious that we’ll do something like that again because we don’t expect demand to go down,” Harvey said of that direct distribution of tickets, which was criticized in some burner circles as promoting favoritism and undermining the event’s stated principle of inclusivity.

Yet he also emphasized that much of Burning Man’s growth is occurring off the playa — in cities and at regional events around the world. “All of this is by way of dealing with the capacity problem. I don’t know how much we can grow in the Black Rock Desert,” he said.

Another realm full of both possibilities and perils — depending on one’s perspective — is the ongoing development of The Burning Man Project, a nonprofit that BRC created last year to gradually take on new initiatives, followed by taking over staging of the event, and eventually (probably in five years) full control of Burning Man and its brand and trademarks.

“God knows, we have a lot of opportunities before us,” Harvey said, adding that BMP is now focused on fundraising. “It is the objective before we transfer the event to start transferring the regional events, and that will take more money and staff.”

After that, he sees unlimited potential to grow the culture, not just Black Rock City. “We’ve got to focus on the people. We’re becoming less event-centric,” he said. “We think of this as a cultural movement.”

Guardian City Editor Steven T. Jones is the author of The Tribes of Burning Man: How an Experimental City in the Desert is Shaping the New American Counterculture. For reactions and details on the EA, visit the sfbg.com politics blog.