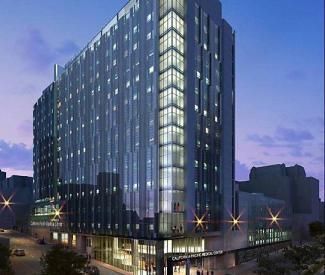 At 10am on Friday, June 15, at the main chambers of the Board of Supervisors, the first of a series of public hearings will be held on specific aspects of the  development agreement governing the $1.9 billion Sutter Health/California Pacific Medical Center proposal to expand and centralize the giant health-care outfit’s health center by building a new 555 bed hospital at Geary and Van Ness. The deal involves demolishing the existing 220-bed hospital at St. Luke’s at Mission and Cesar Chavez and rebuilding a new 80-bed facility, expanding the Ralph K. Davies hospital at Duboce and Noe and closing down the old Children’s Hospital in Laurel Heights.

The hearing will be the first before the Board of Supervisors. Thus far, the project has been before only the executive branch: the Planning Commission and the mayor. After a brief introduction on the overall project the hearing will focus on the issue of jobs.

This is the largest project to be negotiated by the Lee administration — and although the mayor introduced it to the board in May, not one supervisor has yet joined him to sponsor the legislation. That’s an an odd situation given the importance of the project – and the fact that Mayor Lee can usually count on an automatic four votes from the conservative faction of the board. But not this time.

The hearing was requested by a coalition of more than 60 community, neighborhood, labor, and environmental organizations — San Franciscans for Healthcare, Housing, Jobs and Justice (SFHHJJ) — which has been closely following the project for the last two years.  Members of the coalition have already appealed the project’s environmental impact report, passed last month by the Planning Commission, and SFHHJJ has developed a series of amendments to the agreement that it has been pressing on the Board of Supervisors.  Board President David Chiu agreed to set a series of hearings on the project before it voted on, along with the determination of the appeal of the EIR, in  late July.  SGHHJJ hopes to use the hearings to get across the serious shortcoming of the agreement.  In addition, depending upon the appeal of the EIR,  a law suit may well be filed by some members of the Coalition.

In short, what starts next Friday is a big deal.

Not only is it a big deal in the development war that is at the heart of San Francisco politics, but it also is a big deal given what may well be done by the Supreme Court in deciding the constitutionality of all or part of the Affordable Health Care Act. If Obama’s health reform is struck down by the court, in all or in part, which seems almost certain, Sutter/CPMC’s plan will most definitely take on even more importance for the future of health care and its costs in San Francisco.

Sutter currently controls about a third of the market for health care in San Francisco.  With the construction of this project, it will control about 40 percent — a portion most knowledgable observers feel will give it market dominance  and an ability to actually set health care costs in San Francisco. Sutter’s business model — as shown in Berkeley when it took over Alta Bates and elsewhere in the state – demonstrates that  with a dominate market position, it jacks up prices.

As the San Francisco Chronicle noted in 2010: “…Sutter Health Co. has market power that commands prices 40 to 70 percent higher than its rivals per typical procedure — and pacts with insurers that keep those prices secret”.

A US Supreme Court that weakens or strikes down health care reform will simply re-establish the status-quo ante, a situation in which Sutter will thrive.

And that’s why the board’s conservative members are not supporting Mayor Lee’s deal: it simply does not protect the city — itself a major health care consumer for both its workforce and Healthy San Francisco — from Sutter’s history of turning market power into high health care charges.

SFHHJJ want the development agreement amended to place a cap on the costs charged to the city, allowing Sutter no more than 115 percent of the average charged  by  San Francisco’s other private, nonprofit hospitals.  It also wants Sutter/CPMC low charity care payments pegged at an average of what other nonprofit hospitals contribute, and it is calling for rebuilding St. Luke’s in San Francisco medically underserved south east to 180 beds, not the sure-to-fail size of 80 beds.

But there’s even more to deplore about the proposed deal.

In housing, although the EIR showed that a demand would be created for some 1,500 new two-bedroom homes, Sutter/CPMC agreed to only provide funds to build about 90 such homes. Such a massive shortfall will boost housing prices all other San Franciscans will pay.

The project’s impact on public transit at the Geary / Van Ness intersection will be large and ongoing. More than 20,000 new car trips will be generated at that intersection by the new hospital. Plans for a Bus Rapid Transit raised roadway for the 38 Geary — the most used bus line in the city — will have to be altered at an unknown price since the project calls for all auto traffic to enter the site on the Geary Avenue side.

Again, San Francisco taxpayers will be on the hook to pay for these new costs.

But it is the jobs aspect of the deal that is the most distressing. Sutter/CPMC has a long history of labor disputes with its workforce. Last year it replaced nurses who took a day off to protest their working conditions, and a replacement nurse hired by Sutter accidentally killed a patient. Sutter/CPMC refuses to agree to hire all of its 6,000 current employees for the new facilities. It’s requiring them all to apply as new workers, losing all of their seniority, with a real prospect that many currently employed San Francisco residents will lose their jobs once the new facility opens. All that Sutter/CPMC has agreed to do is hire 50 residents a year for four years – 200 new local jobs, total.

The  June 15 hearing will focus on the jobs issue and public comment is sure to be hot on this laughable “commitment” agreed to by the “jobs” administration.