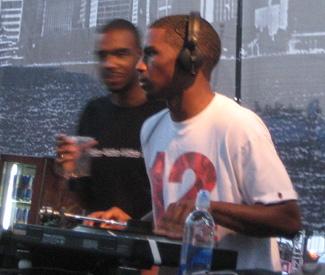 PE revved up nicely into its classic, cavernous hip-hop cacophany, with Chuck D in fine voice and a randy Flava Flav as old school hype-y as ever. (He’s got a Twitter y’all, and we need to help open his friends’ restaurant at 15 Mile Road and Van Dyke.) No, Underground Resistance did not show up to take Terminator X’s place behind the turntables, but we all knew the words — including Ice-T, making a surprise media appearance at one of the best-vibed, eclectic, well-run Movements I’ve been to (five out of 12).

Kids wanted to dance, too — all 30,000+, drenched in 90-degree sweat for three days of the best DJs in the world. The big overarching narrative in the global techno community right now is how it should react to the bland pop successes of the likes of David Guetta and Tiesto on the one hand and the watered-down dubstep youthquake of Skrillex and co. And yes, there were a fair share of Deadmau5 tees and tattoos among the nubile — but nothing sounded anything like all that at the fest.

And no one seemed to care, really. Abstract pop thrills could be had from Major Lazer, SBTRKT, Roni Size, and melodic pop-tech popularos like Seth Troxler, Jamie Jones, and Slow Hands. But what to say about the hordes of smiling teens freaking out over Dopplereffekt’s darkly hypnotic true-electro pounding, or swaying along to No Regular Play’s breezy, sculptural grooviness, or whinnying madly when Lil Louis broke Diana Ross’s “Love Hangover” into the slow part of his “French Kiss” — and then Donna Summer’s “I Feel Love” when it got all fast again? Fucking Detroit. Love it.

So yes, smart and sophisticated techno is thriving — no doubt about that, really, after all it’s been through. Case in point: Sunday night’s huge KMS 25th anniversary party which celebrated founder Kevin Saunderson seminal label with an insane fanboy blowout, featuring Inner City and Carl Craig’s 69 project live, as well as techno inventors Saunderson, Juan Atkins, Derrick May, and Eddie “Flash” Fowlkes together onstage, on four decks setups. And that was just the most-hyped of the satellite parties, which blossomed like wild fennel along the cracked concrete streets of the D.

I caught up with an only slightly bleary-eyed Saunderson after his label’s shindig, and before he was set to go on as the penultimate main stage act. (Closing honors went this year to Jeff Mills a.k.a. the Wizard, whose spacey hijinks predictably killed). KMS is releasing an anniversary box set at the end of this month bursting with juicy classic cuts and new barnstormers. You can read my full interview with Saunderson on the Noise blog at SFBG.com later this week. But one thing he said struck me in particular, especially in metaphorical relationship to the Motor City.

I asked him how he could keep up such tremendous energy through a quarter-century, how he didn’t run himself ragged on the hard facts of the world even as he transported generations of dance floors into cosmic netherworlds.

“It’s a path,” he replied, uncurling his arm along the back of my chair and staring somewhere far in the back of my skull. “Techno is a calling, and you do it because you have to do it, and that’s it. It’s not just some sort of music you build a life around. It’s the direction you take in your whole life, the actual path. No matter where it leads you.”

I recently stayed in a Prince-themed hotel where the mirror above the bed was inscribed, “I was dreamin’ when I wrote this, forgive me if it goes astray ….” It was a fantasy come true. Another? The seventh installment of this Prince vs. Michael Jackson sonic smackdown — a step beyond the normal tribute night with excellent rare selections by NYC’s DJ Spinna with Hakobo, King Most, and Proof.

Why should El Rio, EndUp, and Wild Side West get all the sunny queer veranda jollies? Cafe Cocomo prances into the afternoon outdoors game with this cute-looking affair — and yes, there is a fuschia and lavender costume theme, with prizes awarded to best retina-searing ensembles. DJ EMV throws a few Latin and retro-pop twists with eclectic guests. Plus: free BBQ!