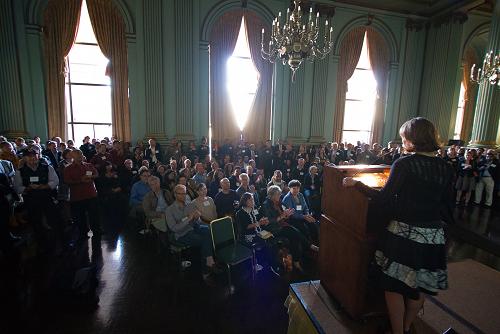 “Back then, that would get you a Golden Wheel Award,” she said, noting that this year’s award to the Building Owners and Managers Association of San Francisco (BOMA) was for its support of legislation requiring all commercial buildings in San Francisco to provide indoor bike parking. “We’ve come a long way in 20 years, clearly.”

In addition to the majority of the Board of Supervisors who showed up to offer their support, Shahum ticked off a long list of other city and regional officials who ride bikes and understand their potential as an increasingly important transportation option during the era of peak oil, traffic gridlock, and public health problems.

“Regularly, we have these top leaders in the city who are biking because they love it, biking because they’ve always biked,” Shahum said, citing the Sunday Streets road closures and the school district going from discouraging cycling to facilitating it as signs of the pro-bike mindset that has taken hold of San Francisco.

The fact that SFBC recognized BOMA – a powerful downtown player that has progressed from seeing cyclists as enemies to embracing them as allies – was telling of the mainstream embrace of bikes.

“We get it, we’re learning,” Meade Boutwell, president of BOMA’s board, told the crowd as he accepted the award, going on to say that “less cars are good for all of us.”

It was a lovely if ungrammatical sentiment and a sign of just how far the business community has come in accepting the imperative of promoting alternatives to the automobile. But there’s still a bit of a disconnect in San Francisco about the role that bikes play in the world’s great pro-cycling cities, evidenced partly by Boutwell’s opening comment, “Under this polyester suit is lycra.”

Keynote speaker Gil Peñalosa – executive director of 8-80 Cities, a nonprofit that promotes creation of cycling infrastructure that is safe and inviting from those 8-80-years-old – mocked the MAMILs (Middle-Aged Men In Lycra) and the notion that people should be athletic or wear special equipment to be able to cycle in cities.

“We dress normally, we act normal, and so on,” Peñalosa said, later arguing that, “Cycling is for everybody.”

In Boutwell’s defense, much of mainstream San Francisco still has a hard time accepting cycling as a normal, safe option. When the San Francisco Chronicle covered Pealosa’s visit to Sunday Streets last weekend – our version of the car-free ciclovias that Peñalosa pioneered as a city official in Bogota, Columbia more than a decade ago – reporter Sam Whiting was jarred by the guest’s casual approach.

“They had come from overseas and were riding in jeans and without helmets, both rookie mistakes,” he wrote of Peñalosa and his wife (“Sunday Streets welcomes its source of inspiration,” 6/4).

But Peñalosa argues that the real mistake is when cities cater primarily to automobiles at the expense of the safety and livability of their neighborhoods, and treat cycling as a dangerous fringe activity. He argues that cities should be built primarily around pedestrians, “but very close to the pedestrians is the cyclists…I think that cycling is just a more efficient way of walking.”

Public transit is important and should be robust, he said, but it’s just not as efficient, user-friendly, economical, or environmentally beneficial as bikes. “We need to walk and bike as a part of everyday life and then we’ll be much healthier,” he said.

Peñalosa urged the crowd to be politically active and push the city to prioritize bikes over automobiles, noting that even in wealthy neighborhoods, only about a third of residents drive cars. And from a design perspective, he said city officials must choose between “Streets for cars or streets for people.”

Once we make the latter choice, Peñalosa laid out an agenda for achieving that goal, starting with slowing vehicle speeds to no more than 20 mph in residential areas.

He cited statistics showing that only about 5 percent of pedestrians hit by cars driving 20 mph will die, whereas the fatality rate shoots up to 80 percent when the vehicles are traveling 40 mph. And for streets in which cars are traveling faster than 20 mph, he said it’s imperative to have bike lanes that are separated from cars by physical barriers, rather than just lines painted on the street.

He noted that Seville, Spain drastically increased its cycling rate in just a few years by committing to building bike infrastructure, and that Chicago Mayor Rahm Emanuel installed that city’s first physically separated bikeway within his first 30 days in office and has perhaps the US’s most ambitious program for installing new bikeways. “San Francisco should not be any less than Chicago,” he said.

In Cogenhagen, which already boasts some of the world’s highest rates of urban bicycle use, Peñalosa said the city has sought to capture more long-distance riders by building 200 miles of “cycle superhighways” – which includes two lanes in each direction to facilitate both fast and slow riders – all for the price it costs to build about a half-mile of subway.

The goal, he said, is to make cycling as “easy, fast, and convenient” as possible, and to apply the political pressure to make that a priority because “if you aren’t doing those things then someone else is and someone else is setting the agenda.”