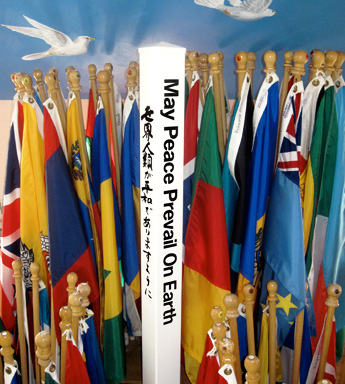 Oakland has garnered more attention in the last year for police violence than it has for peace, but a group of activists is hoping to highlight the city’s nonviolence initiatives and traditions later this month during the kickoff for the three-month global Summer of Peace celebration, starting June 22-23 at Oakland’s Scottish Rite Center.

The Summer of Peace was designed as an “effort to create a critical mass of consciousness,” said Jane Elin, the event manager for the Oakland festival.

A few “anchor events” will be sponsored by the Shift Network, a global peace organization based in Petaluma, but international activists and organizations will hold corresponding celebrations throughout the summer, said Production Manager Bill McCarthy. Soon, with hosts able to post events online.

The Voices for Peace festival, about a year in the making, will kick off with a benefit concert on June 22 from 7:30pm to 10:30pm, featuring Maria Muldaur and Friends, Country Joe McDonald, the Vukani Mawethu Choir, and a slew of other performers. At a conference starting at 9am the next day, speakers including peace advocates Marianne Williamson, Barbara Marx Hubbard, and James O’Dea will address peace-building efforts in a variety of spheres.

More practical components of the conference, such as a seminar on nonviolent communication, “offer tools and awareness – something you can walk away and use,” Elin said. But the general goal of the summer-long effort is to find ways to connect activists, and to keep peace-building in the global consciousness, she said.

“One of the things we’re doing is having people make a pledge during the summer,” McCarthy said. Participants will decide how many “acts of peace” they will commit to on a weekly basis, then share them online.

If all this sounds a bit vague, that actually part of the intention. One goal of the project is to highlight the diverse range of “pathways” one might take to finding personal peace or advocating for peace locally or abroad, said Philip Hellmich, “director of peace” with the Shift Network..

“We’re using ‘peace’ in multiple contexts,” Hellmich said. “We want to acknowledge and celebrate, as well as accelerate, the ways it’s happening.”
Hellmich pointed to a recent study that found more lawyers now do yoga than play golf as an example of people searching for inner peace, an “essential component” of working toward peace on a larger scale, he said.

“There’s been an exponential growth in peace-building. In 1985, only a handful of colleges had peace and conflict resolution programs, and now there are hundreds,” Hellmich said. “This isn’t your parents’ protest movement. It’s about all the different ways emerging to create a culture of peace. We want to move away from the typical polarization that happens: us versus them, Democrats versus Republicans, hawks versus doves. It’s a more sophisticated and nuanced approach.”

Those who want to participate without leaving the house can tune in to a series of interviews on a webcast throughout the summer, and call in with thoughts and questions. Each week of this “telesummit” will focus on a different theme: forgiveness, education, the science of peace, arts and culture, business and economics, and even peace in the military. There are big names on the program for this as well, from Alice Walker to Olympic gold medalists.

All profits from the ticket sales at Voices for Peace will go to Urban Peace Movement, an Oakland organization that aims to combat conditions that lead to violence in the city. The suggestion to hold the opening celebration in Oakland came from one of the Shift Network’s 27 Peace Ambassadors, and the event coordinators quickly warmed to the idea.

“Obviously, the city of Oakland has had its share of having to deal with conflict and violence,” McCarthy said.
“This will highlight peace-building activities and organizations in the city, and let the city shine,” Elin said. “It’s a place that needs more support.”

The morning before the concert, Oakland Mayor Jean Quan, United Nations Association of the East Bay President Jerry Weber, and Shift Network representatives will gather in Willie Wilkins Park to install a Peace Pole. “May Peace Prevail on Earth” will be written in several languages on the handcrafted Peace Pole, a tradition that began in mid-century Japan.

The permanent monument – and the entire weekend’s festivities – will “designate the city as a place of peace,” McCarthy said.