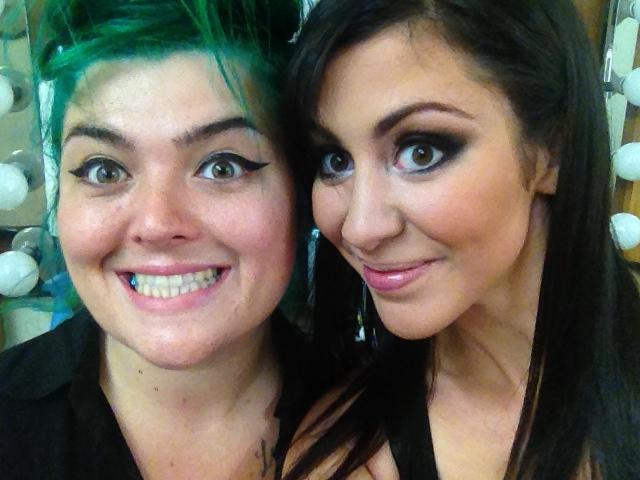 “My job is really weird. I think about that all the time.”

I’ve often imagined what it would be like to be a fly on the wall at Kink, so my talk with Baugh was particularly illuminating. Sample quote: “I’m about five inches away from a person’s face. People start to break down their barriers and tell me things. And when you work with people in the sex industry all bets are off. People just say anything.”

San Francisco Bay Guardian: How did you start doing makeup at Kink?

Brande Baugh: It started off as a fluke. I did makeup for Pink and White’s first episode of the Crash Pad Series. A talent on that production was starting to work at Kink. The talent identified more with a butch aesthetic and needed to do a femme look for her shoot. So she asked me to do her makeup. After the shoot, Princess Donna, a director at Kink, asked who did the talent’s makeup. The next thing you know, they were calling me in for an interview.

For my interview I did Princess Donna’s makeup. She told me to go all out, so I made her look like a drag queen. Donna said she loved it. It’s really funny in retrospect because I would never do someone in porn’s face like that now. I’m sure Donna in part really liked me. In her mind I was hired, and I could have probably done anything.

SFBG: Where does sexuality and makeup intersect?

SFBG: Are you currently working on any other projects?

BB: Yeah, I’m working on a television show called Hollywood Nailz. It’s a show about my friend, a hair stylist, and I, and our interactions with all the people we meet in the beauty industry. We will finish filming at the end of June. I’m really excited.

SFBG: How do you identify with your gender?

BB: Well I’m a girl. I’m a lady. I’m a real butchy femme. I feel like I can be anything — I mean I’m a makeup artist, and I also went to school to be a mechanic. I like that dynamic quality.

SFBG: What does creating a sex-positive space mean for you?

BB: For me, it’s a place where you can be whomever and not feel judged. People in a sex-positive space are interested in being progressively more open and aware. It’s about educating one another, but never in a negative way.