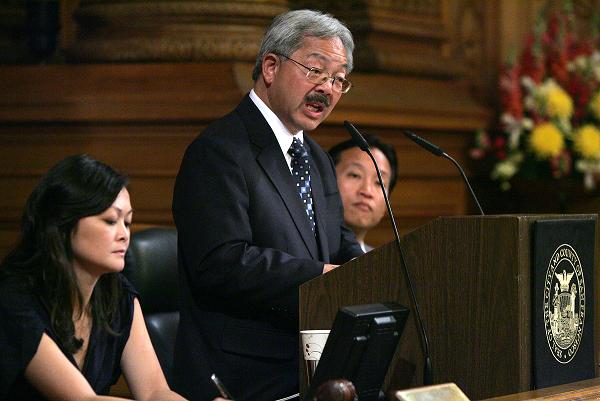 When Mayor Ed Lee unveiled his proposed $7.3 billion city budget today, it was a sharp contrast to the annual budget rituals of his predecessor, Gavin Newsom, both in style and substance. Not only did Lee present a budget without employee layoffs or cuts to critical social services, but he capped months of collaborative work with the Board of Supervisors by presenting his proposal in Board Chambers.

Newsom preferred to offer his budgets during press conferences in his office or at media-friendly events outside City Hall, and his budgets were developed with little input from supervisors and almost always included controversial cuts to programs favored by progressive supervisors or constituencies, triggering an angry backlash that created an air of acrimony around the board’s budget hearings.

“It’s a very good budget. We’re very pleased with the process the mayor followed, and with the outcome in most cases,” Sup. David Campos told us, later adding, “The fact that the budget was presented in chambers was a good thing and a real change.”

Flanked at the podium by Board President David Chiu and Budget Committee Chair Carmen Chu, Lee began his address to the capacity crowd of department heads and other interested parties by noting, “As many of you know, I’m a person who does not like a whole lot of drama.”

He thanked those who have worked on the budget over the last six months – which included tough negotiations with labor unions that were tempered by higher-than-expected city revenues – and said the budget “really is an expression of our values as a city.” And this time, it was a statement and set of priorities that even progressives could agreed with.

“At a time of state cuts, protecting our social safety net is more important than ever,” Lee said as he announced that his budget included full funding for public health, human services, and HIV/AIDS prevention and treatment programs, all of which were cut by Newsom, with the supervisors then having to find funding to restore them.

Lee credited his economic development programs with this year’s budget turnaround – commenting that “San Francisco’s economy has recovered and our reserves are growing” – and it is true that the payroll taxes paid by businesses came in about $65 million above projections.

But an even bigger factor in this year’s projected budget deficit shrinking from $263 million to $170 million was the increase in the real estate transfer tax on properties over $5 million, proposed by progressives and approved by voters in 2010. The real estate transfer tax is expected to bring in more than $200 million in the coming fiscal year, $85 million more than this year. By comparison, the 5 percent across-the-board budget cuts that Lee ordered earlier this year amounted to just $58 million.

How to view the improving city budget situation is critical right now as Lee and his business community allies finalize negotiations over their fall ballot proposals to reform the city’s business tax structure and to create a housing trust fund to subsidize affordable residential development. Each needs to be in final form by the end of June, and Lee told us both are still being negotiated behind closed doors.

Lee has insisted the business tax reform be revenue-neutral, but SEIU Local 1021, the largest city employee union, wants it to bring in an additional $30-50 million per year, which represents how much the city has lost every year since 2001 when the biggest downtown corporations sued to invalidate the city’s gross receipts tax.

That union recently commissioned a study from researcher David Kersten of Kersten Communications that shows the city’s budget picture is actually better than presented in the mayor’s budget, which relies on revenue projections from March even though revenues have continued to increase since then. “I think it’s a little dishonest to put out deficit figures that are so out of date,” Kersten told us, arguing that it was a deliberate effort to maintain a sense of fiscal crisis in the city.

“We know that revenues are coming in higher than it was in March,” the union’s Gabriel Haaland told us. “They need to be honest with what the fiscal picture is.”

Indeed, despite the absence of the major doom-and-gloom that has marked past budget proposals, this year’s budget – the city first two-year budget proposal, thanks to voters approving Prop. A last year – continues to project a city government in decline in the coming years.

Campos said that it’s important to reverse the deep cuts that city government has undergone every year for more than decade, starting with a business tax reform measure that brings in new revenue as it broadens the tax base. “We can’t forget there have been sacrifices that have been made,” he said. “Revenue enhancement has to be part of the solution.”

Lee and his supporters in the business community have portrayed the stimulation of economic growth as the key to the city’s fiscal salvation, even as they create business tax exemptions for Twitter and other companies to create that growth. But tech companies with venture capital funding can end up increasing rents and other costs on the rest of the economy, as Lee acknowledged in his speech.

“I know there are anxieties out there because rents are starting to sneak up,” Lee said, arguing for a housing trust fund to subsidize “more housing for people at every income level.”

After his speech, Lee acknowledged that he still hasn’t struck a deal on the proposal – which commercial landlords are opposing because it would be funded by an increase in the real estate transfer tax – saying they were discussing the possibility of a new funding mechanism. “We have a little gap and we’re trying to figure that out,” Lee said.

Asked by reporters how he was able to avoid the deep cuts of previous budgets, Lee credited the improving revenue situation and said, “I think we’re incredibly lucky.”