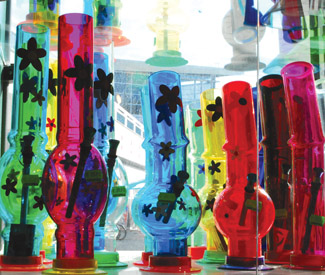 The tallest structure in Germany is a sky needle with a majestic ball sitting well up its length. Due to some vagaries of the physics of light and the shiny, Epcot-like nature of this ball, Berlin's Fernsehturm (a.k.a., television tower) casts the shadow of a cross over the city, much to the consternation of its East German builders.


One wonders what they would think of the head shop nestled into the base of their show of socialist triumph. For the past 11 years Udopea has been here, currently occupying a space next to a bike rental shop and mere feet from a line where a million visitors cue every year to ascend into the Fernsehturm's observation decks and fancy restaurant.


But maybe this isn't such a weird thing. A cursory look at Udopea's window offerings reveal the standard wacky tourist fare: rainbow hair dyes, black-light bongs, bongs spotted with hippie daisies. I was in the market for cotton candy hair, so we stopped in — only to see my beloved California-made Magic Flight vaporizer (see Herbwise, "Hippies do it better," 2/8/12) vaporizer. It appears Udopea actually knows its cannabis.


Berlin is not the least tolerant place for marijuana in Europe. Head over to Görlitzer Park in the trendy Kreuzberg neighborhood and you can score baggies of dry cannabis in a flash. Marijuana is openly smoked in many of the town's world-famous, dirty-as-hell techno churches. But it's no cannabis culture capital. After all, this is a place where entering "marijuana" as a search term on the website of Berlin's reigning English-language culture magazine turns up only one result: an interview with Evidence, of LA underground hip-hoppers Dilated People. (He's making a pun off of "bagpipes.")


So those looking for a conversation about weed that goes deeper than "you want" and "how much" should drop through Udopea. In addition to klassy US products, you can find Germany's finest glass company Roor (www.roor.de). Glassblower Martin Birzle's brand inspires fierce adherents — you should have heard the Udopea sales assistant's roar of disbelief when I told him I was unfamiliar with the product. (Nationalists.)


Plus, stuff for growing so that you don't have to keep heading out to Görlitzer. The quantity of lights, fertilizers, and various other accoutrements that Udopea deals will actually sound the death knell for their most idiosyncratic of its five Germany-wide locations. More space is needed to properly stock the grow section, so the Berlin store is moving to a more spacious location in another neighborhood. Later, tourists.