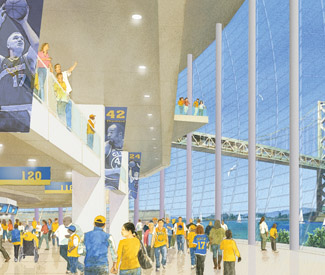 After a secret whirlwind courtship that lasted a mere five months, Mayor Ed Lee and the Golden State Warriors tied the knot May 22 at Piers 30-32, announcing their unexpected union at the site they intend to occupy with a new basketball arena by 2017.

The Warriors’ entrepreneurial new owners — Joe Lacob and Peter Guber — say they love this “iconic site” and promised to build a “spectacular sports and entertainment complex” that is “architecturally significant.”

But what about Oakland, the team’s unceremoniously jilted current homemaker? The perception from the East Bay is that Lacob and Guber were duplicitous and underhanded in their dealings with city officials that were desperately trying to retain the city’s three main sports franchises — the Oakland Athletics baseball club, the Oakland Raiders football team, and the Golden State Warriors basketballers — all of whom have recently signaled interest in moving.

Several sources told us that the Warriors’ new owners have been lying to Oakland officials about their intentions for months. For example, Oakland City Councilmember Larry Reid told me “that when our staff had conversations with the new owners, they always indicated they hadn’t yet come to a final decision.”

Reid told me what happened next. “I get a call Sunday night at 9:30 telling me about their move like a thief in the night.” Reid said. “It’s upsetting.”

On the fan site GoldenStWarriors, Lacob seemed to belittle Oakland. In an 18-minute video, Lacob predicts that Oakland will be left with only one sports team someday. “I think they’re challenged,” he said when asked what’s wrong with Oakland, adding the city is in “a difficult situation.”

Sports talk radio hosts, fan sites, and bloggers, however, seem to be evenly divided on the move. Even hardcore Oakland and Warriors blogger Ethan Sherwood Strauss prefers the San Francisco site. At his Warriorsworld site, Strauss wrote: “I’d never leave Oakland…. I have everything at arm’s length. There’s food from around the world, teeming farmers markets, lush green hills, Redwood trees, Mosswood Park, Grand Lake Theatre — this is all within two miles.”

But: “Guess which is the better place for the Golden State Warriors? It’s that west bay city national broadcasters keep showing during Warriors games while pretending Oakland doesn’t exist.”

Thus far, neither Oakland Mayor Jean Quan nor Mayor Lee have made any comments regarding the other side’s situation or whether their mutually reported “good relationship” has been strained. But it must be devastating to Quan, given all of her work and hoopla over her recent announcements surrounding her ambitious plans for the “Coliseum City” project.

Not unlike the Warriors’ “world class arena” planned for their new San Francisco home, Coliseum City, according to Quan, will be a “world-class sports and entertainment district.” Ryan Phillips, writing on the Oakland North blog in March, said that the project includes “building hotels, retail, office and residential space in the Coliseum complex…as well as building an Oakland Airport Business Park just across the freeway on the way to the airport. The business park will be developed to attract tech companies.”

Mayor Quan issued a press release following the Warriors’ bombshell to announce that she remains “bullish” on her Coliseum City project. Her new spin is that, “Coliseum City is a long-term development project that was never dependent on any one tenant. It was always a larger project than just one sports team.”

But if there’s even one team missing from the original trinity, then they have no choice but to lower their expectations and scale back their plans. Therefore, the Warriors’ move could trigger a complete unraveling of not only her recent plans to keep the Oakland A’s baseball team in Oakland, but also efforts to keep any team there.

For example, a case study published by the Airport Area Business Association (AABA) in conjunction with Coliseum City principal and manager Oakland-based JRDV Urban International, and students at UC Berkeley’s Haas School of Business found, “The Coliseum complex presents a unique opportunity to prepare a pioneering business model that generates revenue for both public and private interests.”

Presciently, in the wake of this announced move by the Warriors and how that hurts Oakland, the study asked: “Are the withdrawal of redevelopment monies, the negative perception of Oakland (and especially Deep East Oakland) by investors and the soft commercial real estate market insurmountable? Can the City of Oakland and Alameda County garner the public support required to approve the necessary public financing and inspire investor confidence?”

Manning up, Councilmember Reid told me that Oakland bears some responsibility for this fiasco. “I’ve been agitating for 10 years to get this Coliseum project going. But let me tell you about two critical mistakes Oakland has made over the last decade,” he said. “One, Oakland has always taken the position that these teams had no place to go. Well, you see where that thinking got us today…Two, 10 years ago the decision was made to invest in the old [Oakland] Army Base. Yet, to this day, not one spade of dirt has been unearthed to symbolize any kind of progress is underway there. In fact, the whole project is at a standstill.”

Maybe, but Oakland and Warriors’ fans should not despair. It is not a done deal because a million things could go wrong. For example, this will be the fifth attempt to develop Piers 30-32 into something spectacular over the last several years.

Also, environmental groups and local activists are already squawking about the site. It has to pass a notoriously tough approval process of at least four major agencies. Financing might fall through, at least until Warriors ownership present to the press, government, and citizens some details: Tuesday’s press conference was basically a pep rally — the only thing missing were the pom-poms. Finally, Pier 30-32 and the site have yet to pass muster over the environmental and safety concerns and myriad other requirements of the California Environmental Quality Act (CEQA).

If any obstacle dooms the Warriors’ plans, Oakland’s Assistant City Administrator Fred Blackwell said they’d keep the door open for these prodigal owners: “And in the end, we will leave a space for the Warriors after they are exhausted from the CEQA litigation and cost increases required to be on the San Francisco Waterfront.”

“In a nutshell,” according to a City Hall press aide, Blackwell “means that waterfront development is expensive and requires an extensive and complex environmental review and permitting process involving review and approval by a number of local, state, and sometimes federal agencies.”

But what if it is a success? Oakland loses even more than just the Warriors. At least one politician pointed out, and I also heard this on 95.7 FM The Game, that what’s to stop circuses, ice shows, and major rock stars from ditching Oakland and following the Warriors to this splashy and scenic new entertainment venue?