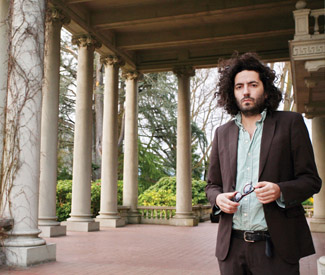 MUSIC “Harsh urban space, with a light misting.” That’s how Dan Bejar describes 2011’s Kaputt, his ninth full-length under the Destroyer moniker; listen to it with headphones, on a foggy day in San Francisco, and you just might agree.

Much has been made of the stylistic shift the Vancouver singer-songwriter has initiated on this record. Awash with fretless bass, lite-jazz sax noodling, and a syrupy synth-haze reminiscent of Avalon by Roxy Music, Kaputt comes across as subdued and wistful, in contrast to the baroque, acerbic tone of his previous output.

Bejar spoke with me over the phone from his home in Vancouver, detailing the second Destroyer lineup since the release of Kaputt, and their renewed approach to the material, as, “more dynamic and muscular than the aesthetic of the production… it’s mostly just a disco band, really,” he explains, with a tinge of sarcasm. “Yeah, hard-rock disco.”

However, while the previous tour was almost exclusively concerned with translating Kaputt to the stage, Bejar suggests that his current octet has, “probably learned twice as much material as any other Destroyer band before it.” The upcoming tour will find Destroyer approaching older, guitar and piano-based songs with trumpet, sax, and mega-synths for the first time. “We’ve not necessarily Kaputtified [the older material],” he explains, “but definitely given things a new sound.”

Kaputtified? Bejar wouldn’t likely be using this word if the album didn’t possess such a distinct, consistent atmosphere. The production aesthetic of Kaputt has inspired countless nerd-debates over the past year or so, largely concerning the merits of tributing a musical era — the early 1980s — that some listeners find questionable these days.

“I think there’s some things on the record that, some people might find repellent,” Bejar observes. “Not necessarily younger people so much as people my age, or a bit older, who maybe lived through the late ’70s and the ’80s, and were kind of just bludgeoned with really bad examples of production techniques and instrumentation that went down.”

That said, Bejar himself is hesitant to slap the “’80s” tag on Kaputt, despite this strong reaction from the blogosphere. “You never know when your intentions, and when the reality of what you’re doing, match up,” he admits, “[but] I always just think the songs are distinct enough that they can just grab hold of whatever style they feel like, and still come out sounding like their own voice.”

Another common misconception about Kaputt is the suggestion that it was written and recorded from a nostalgic perspective. After all, Bejar was a mere nine years of age when Avalon came out. “I don’t think it’s really nostalgic,” he insists. “I’ve always thought of it more as, say, someone on their deathbed, pumped full of morphine, maybe seeing what visions go wafting by.”

This deathbed image sheds some light on what Bejar describes as a “blankness” at the heart of Kaputt‘s songwriting and vocal delivery. “The sense of space was always important,” he contends. “There’s probably half the word count than there is on any other Destroyer album.” This relative economy of words is reflected in Kaputt‘s relaxed, unhurried pacing, which provides a stark contrast to the freewheeling energy of, say, 2006’s Destroyer’s Rubies.

In describing his aesthetic influences, Bejar mentions, “most of my inspiration comes from Miles Davis, on a daily basis, anyway,” Thinking within that context, Kaputt very well might be Destroyer’s In a Silent Way: a deeply transitional affair steeped in lush ambiance, with the ability to go hog-wild, but the class, restraint, and wisdom to keep things at a simmer.

It’s an ideal soundtrack to this city at its grayest. A light misting, indeed.