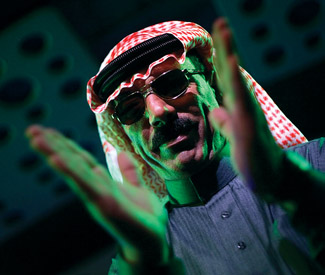 
I'll be back to join you at the following ragers, but right now I'm off to "grabby" me some drinks in the stunning Second City. First stop: a strong sidecar and some live Latin jazz at Al Capone's favorite hang, the Green Mill. Straight mobbin', y'all.

Are you ready to completely lose it, hypnotic synth-groove hi-NRG Syrian folk-pop style? Even just thinking of how this hyper-energetic, legendary Middle Eastern singer somehow came to be embraced by Western ravers makes me smile — but we'll all be too busy bouncing and trying to sing along to deconstruct all that.

What would the city's techno scene be like without Kontrol? Ace new crews like As You Like It and Rocket might not be around if it hadn't been for the seven-year-old monthly blast of live news from the global techno underground. Originally started at the storied Rx Gallery as a clean, minimal-pumping break from all the baroque, bombastic clutter that was techno in the early 2000s (and as a showcase for the burgeoning international touring circuit created by the Internet and advancing digital technology), Kontrol grew at the EndUp into one of our invaluable electronic faces to the world. Now the Kontrollers — Greg Bird, Alland Byallo, Sammy D, Nokloa Baytala, and Craig Kuna — have way too much going on, damn their popular talents! This seventh anniversary event is also the end of the line for the monthly party, although Kontrol will live on in other forms, including, I'm sure, one day, a 21st anniversary party, at which I will be raving in my hover-wheelchair. Berlin master Heiko Laux performs. Danke and aufweidersehn!

After last year's incredible reunion (and a hugely successful world tour) one of SF's original rave crews — the one that brought a tasty touch of pagan British psychedelia to its eclectic productions — gathers again to howl. DJs Garth, Jeno, Thomas, and Markie, plus a signature cast of beloved characters, get devilish all night. *