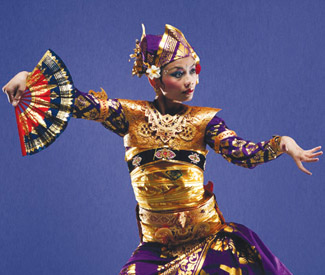 DANCE Moving, especially when it’s not by choice, is never fun. Losing your home after some 30 years of relative comfort and security is really the pits. That’s how I felt when I heard that the San Francisco Ethnic Dance Festival — my first encounter with the Bay Area’s voluptuous dance culture — would not be able to continue performing at the Palace of Fine Arts because of the Doyle Drive reconstruction.

Yet EDF has survived; the new, smaller, more varied venues have encouraged the re-thinking of what had become a comfortable format. One more time EDF is taking its shows on the road — to Fort Mason Center’s Cowell Theater and Firehouse, and to the de Young Museum, the Asian Art Museum, and the Novellus Theater at Yerba Buena Center for the Arts. Presentations range from intimate lecture formats to full-throttle multi-company performances.

Unlike previous years, however, the popular January auditions (where you could get your fill, or a least a taste of what world dance is all about, for a $10 day pass) had to be cancelled for financial reasons. Like other arts organizations, EDF is struggling, though the 34-year-old fest has been hit particularly hard. “We were forced into an expansion of projects at a time when the economy was contracting,” says Carlos Carvajal, EDF’s co-artistic director along with CK Ladzepko. The Novellus Theater also seats 200 fewer people than the Palace, a significant loss of earned income.

The Ghana-born Ladzekpo founded his African Music and Dance Festival in 1973 and has introduced generations of artists into the intricacies of African rhythms and traditions. Carvajal started folk dancing when he was in high school in San Francisco and has performed with SF Ballet and European and South American companies. Both men have been closely involved with the Festival for years — as adjudicators and observers and now as artistic directors.

The absence of auditions allowed the two curators to go for the best and the brightest for this year’s 30 slots. They were particularly looking for innovation because, as Carvajal quotes Ladzekpo, “We can’t hide behind tradition.” Master artists whose primary concern was the preservation and dissemination of specific traditions started many of these ensembles. But more and more, this generation of ethnic dancers feels free to reinterpret and experiment what used to be considered inviolate practices.

Today’s artistic directors very likely have not only encountered other global dance forms but probably have studied modern dance, choreography, and even ballet. Many of them are as willing to test the boundaries of their fields as their colleagues in other art forms. This year’s line-up, while still offering plenty of what we all have come to love — Chinese Dragon dance, Native American hoop dance, rites of passages rituals from Liberia, temple ceremonies from Bali — offers plenty of contemporary choreography grounded in specific cultural traditions. It’s global dance in all its complexity.

Two different gamelans working together — as the Balinese Gamelan Sekar Jaya and the Sundanese Pusaka Sunda are for the new Bayangan Jiwa — would have been unheard of two decades ago (not to speak of them using very cutting-edge shadow-light technology). Neither would you have had an Uzbek percussionist (Abbos Kosimov) pair up with a Tajikistani dancer (Mariam Gaibova). And, “We specifically asked Abhinaya Dance Company to return with San Jose Taiko,” Carvajal says. It took guts and imagination to bring (successfully) together Japanese Taiko and Indian Bharata Natyam.

Carvajal is also delighted by how Carola Zertuche has revitalized Theatre Flamenco of San Francisco. For EDF, the Company will perform flamenco barefoot, milonga style, reconnecting the dance with its Moorish and Gypsy roots and also reminding us that flamenco’s percussive qualities originated in a musician’s use of a cane and not the dancer’s heels.

Maybe OngDance Company personifies EDF at its most sophisticated. At Dance Mission Theater in January they showed themselves profoundly steeped in Korean tradition, absolutely contemporary in their perspective and brilliant in the art of stagecraft. They’ll present Shadow of Cheoyong during the festival’s third weekend of performances. *