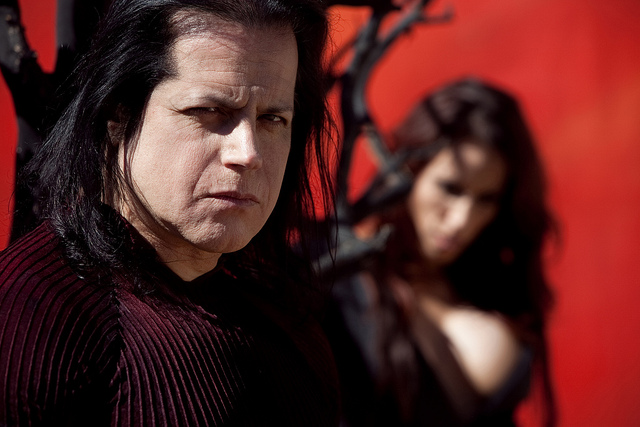 Glenn Danzig has spawned a cult following with his dark and brooding voice, and the sinisterly seductive imagery of his lyrics. From the early days – some 35 years back – as front person for horror punk icons the Misfits, to metal-infused Samhain, and finally to the eponymous Danzig, where he achieved a degree of mainstream success, he has taken macabre themes, blasted them with an obsessive sheen, and come up with some of the most hauntingly memorable songs this side of hell.

Danzig comes to the Warfield on Sunday night on the second stop of a brief two-week tour that finds the 56-year-old icon reuniting with Misfits guitarist Doyle Wolfgang Von Frankenstein. Doyle comes as a special guest for a handful of concerts that promise to feature a set of classic tunes with his old band mate.

Speaking over the phone from Los Angeles, the man who has made a living bellowing songs like “All Hell Breaks Loose,” “Skulls,” “Twist of Cain,” “Mother” and countless others is for the most part fairly soft-spoken, and keeps his responses short and to the point.

When first asked about the upcoming show with Doyle, he simply said, “We do a Danzig set, and then about two-thirds of the way in we bring out Doyle and do a bunch of old stuff.”

Later on though, Danzig did agree that the music he’s made has had a lasting impact on those who grew up listening to it, along with kids today just now discovering the Misfits and Samhain, or even newer solo releases such as 2010’s Deth Red Sabaoth.

“That’s the great part, because no one sees all the bullshit you have to go through, so when people come up and tell you what your stuff means to them, it’s pretty cool.”

Danzig was in San Francisco most recently last December, when he was a special guest at Metallica’s 30th anniversary run at the Fillmore, singing “Die Die, My Darling” and “Last Caress,” two Misfits tunes that Metallica covered in their early days as a band.

“I hadn’t seen those guys in a while, and James called me up, and was telling me that the kids were getting to see it for $19.81 total — they were doing it for all the right reasons. I think they just wanted to let fans have a great time, and it was a lot of fun, I got to see a lot of old friends.”

Speaking of covers, Danzig himself is currently finishing up work on an as-yet-untitled album of cover songs, the first of which, “Devils Angels,” is available to listen to on his website. The record, which is due out in the late summer or early fall, is one of many projects that the singer has on his plate at the moment, or hopes to in the near future.

Once the covers album is completed and released, Danzig plans to record Black Aria III, the latest in a series of classical solo projects, and then set about working on the next Danzig record.

In addition to making music, Danzig has been writing several different horror and fantasy-themed comic books over the years, published by his own company, Verotik. One of his titles, Ge Rouge, has been in the development stages of being made into a film for several years, but has run into differing problems.

“We had it going with one production company, but we had to yank it because it just wasn’t going anywhere with them — eventually you get tired of doing all these re-writes on it, and you just say, ‘Look man, either you’re doing this or you’re not doing it!’” says Danzig.

“We had a bunch of other people that wanted to see it, but we couldn’t show it to them because we had a contract – once we’re out of the contract we can start showing it to other people. And I’m always writing scripts, so…we’ll see,” he laughs.