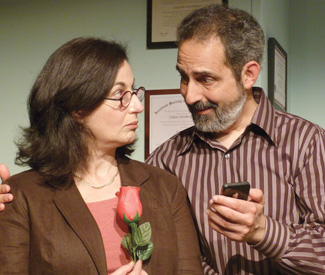 THEATER Unmanned spy drones, electronic snooping, cyber warfare — why should the government have all the fun? In FWD: Life Gone Viral — the world premiere comedy by Jeri Lynn Cohen, David Ford, and Charlie Varon currently enjoying a sharply-performed, comfortably low-tech production at the Marsh — today’s social media and some of Big Brother’s latest gadgetry inspire two pairs of ex-spouses to high-falutin’ excess over the more banal of security issues. The outcome is a surprisingly thoughtful and consistently amusing collision between perennial complaints, whether mortal or marital, and the current runaway state of online exhibitionism.

The nexus of issues are staked out early and with droll precision, beginning in the direct address by an entrepreneurial Russian (Varon) with a heavy accent and a former career in the security state, who explains a little device he has on offer to the abjectly curious. It’s a mini-drone in the shape of a housefly, operable through your cell phone, ready to beam into the palm of your hand pictures and audio from, say, your upstairs neighbors — answering those nagging questions you’ve always had about them: “How do they live? With whom do they have the sexual?”

It’s not as far-fetched as the accent. This kind of technology is already around, more or less. So it’s all the easier to accept middle-aged, terminally ill Donald Saperstein (Varon) getting to be the proverbial fly on the wall of his ex-wife’s medical practice. It’s a cozy arrangement for the rather megalomaniacal Saperstein, who seems to prefer one-way communication. He’s recently caught fire on YouTube, intoning his thoughts on dying to other cancer sufferers spread over the infinite expanse of cyberspace, while his ex-wife, oncologist Dr. Lillian Steinberg (a considerate, somewhat prim Cohen), toils away in a bland office. And offices are where director David Ford sets most of the action, sandwiched between parallel planes of dull carpet and off-white ceiling panels.

But Saperstein ends up having to share the wall with another fly, and another customer, named Ellen Green (a suddenly brash Cohen sporting a New York accent), who’s purchased the same gizmo to spy on her ex-husband, patient Adam Roth (Varon, bowed and anxious but with a pent-up exuberance). (As spy-flies Ellen and Donald, Cohen and Varon tuck their elbows in, jut their arms out and shake their jazz hands to indicate their droning drones’ airborne path through physical space.) Ellen is there to get her schadenfreude firsthand. Their unexpected encounter in cyberspace plays like a scene out of William Gibson, if Gibson wrote for 30 Rock. Meanwhile, their targets confer with what remains of patient confidentiality. It seems Roth is not dying after all, a matter of a mix-up in the records department: it’s another Adam Roth who has cancer.

The new lease on life gives Roth the hots for his doctor, who responds with cautious enthusiasm to his advances. But she’s deeply chagrined to learn he finds so much value in a certain YouTube video purporting to offer insight and aid to her patients while casting a veiled accusation in her own direction. Even the Mayo Clinic has seen fit to recommend her ex’s “Cancer of Blame” video. Roth, an amateur filmmaker with a taste for the classics and the ancient Athenian marketplace of ideas reborn in the internet, gallantly rises to her defense with a modest proposal: “Have you thought about reposting his video with your own subtitles?”

From this point, things get ugly, amid a rich vein of comical discourse and defensiveness around issues of privacy, revenge and pathological degrees of attention-seeking. The Russian spymaster, from his vantage, sees it all: “Soon we will have diseases of overexposure, diseases for which we still have no name.” It may be strange to say, but there’s something refreshing and affirming about a group of characters who, even in the face of their own mortality, can prove petty, vindictive assholes to each other. Our cyborg-selves end up pretty human after all.