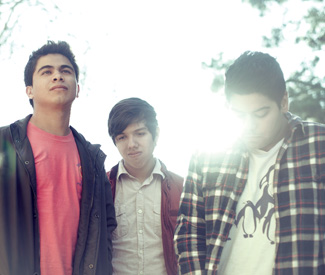 MUSIC Pavement. That’s all I really associate with Stockton. Personally, I’ve only been there once, few weeks back on my way to Yosemite, and I just drove through — 205 to 120 — stopping once for gas. So pavement all the way. Yet, despite the lack of waves, it’s home to Surf Club, a sunny four-piece that’s recently released its debut EP, Young Love, on Death Party Records.

“It’s not that bad living in Stockton,” says guitarist Eddie Zepeda. “You make the best of it.” Zepeda barely finished this optimistic assessment before bassist Fonso Robles offers a conflicting view: “Uh, it’s pretty bad.” Earlier in the week, Robles had been pulled out of his car, in the middle of the day, and held up at gunpoint. Before taking off, the robber cautioned, “Don’t let me catch you slippin’,” a combined threat and unsolicited piece of street advice.

Early last year, Justin Vallesteros of Craft Spells moved his project from Stockton to Seattle (where he was born), citing the former city’s number one placement on Forbes Magazine’s 2011 list of “America’s Most Miserable Cities” among the reasons. Surf Club’s Frankie Soto, then guitarist for Craft Spells, stayed behind in his own hometown. “It wasn’t really a hard decision. It was Justin’s band, so I was just like go ahead, dude,” Soto says.

There doesn’t appear to be bad blood between the groups: “Justin still comes over and we all jam,” Zepeda says, and a few days after the interview I run into Soto and Robles at the Great American Music Hall, where Craft Spells is opening for the Drums.

Still, after the split, Soto tells me he spent a few months depressed in his room, trying to find his own sound. When he re-emerged it was with Zepeda and Robles, as well as drummer Jose Medina, who the rest of the group insists is its most talented member. “He’s probably the best drummer and guitarist in the band, and he doesn’t even play guitar for us,” Soto says.

With individual experience in a variety of other bands, the four switched around on instruments, trying to find the right configuration. Medina went from bass to drums, Soto took on vocals in addition to guitar, and Robles — in a Tina Weymouth move — started learning bass from the beginning.

When the band first started coming together, Zepeda had been listening to a lot of surf rock and Beach Boys. It’s certainly an influence on the sound of material released so far, but they didn’t set out or plan to be a Dick Dale revival band.

“I can’t even swim,” Soto says, in a moment of irony recalling Brian Wilson’s fear of the water. “Of all the band names, Surf Club just seemed the easiest to hear.” (Robles angled for Faucet Water, presumably in reference to Stockton’s E. coli contamination warning a couple years back, and Youth Wave was another aquatic option.) “I don’t consider us a surf band. It’s just pop, and that’s what we focus on for all of our songs,” Soto asserts.

True to its name, Young Love is full of open-hearted lyrics with youthful longing. In addition to vocal harmonies, the biggest surf aspect is the tidal wave tempo, where bouncy guitar rhythms get carried by the super tight drumming, speedy fill, and shifts in patterns that reveal Medina’s background in metal and jazz. Soto sings with a light voice, and comes off as a bit of a tender softy. “I guess I’m still kind of shy,” he explains, “I took choir in high school, but it’s still kind of weird being in front of everyone with them paying attention to what you’re saying.”

Barely in their twenties, friends since fifth grade, a band for less than a year, with less than a dozen shows performed so far, Surf Club is clearly still figuring out how to make it work.

As Zepeda puts it, “we’re pretty young, we really don’t have any money, and we all have bills to pay.” That’s the point where people might give you advice, besides slippin’ or not slippin’. When they played with the Soft Pack a couple months back, singer Matt Lamkin gave them some. “He was telling us to move out of Stockton,” Soto says. But ignoring that kind of advice has worked so far.