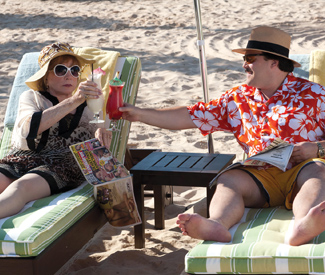 FILM When trial locations are moved, it is generally because the crime is so notorious, or the local populace so riled, that it is not expected the plaintiff can avoid a hostile jury. It is seldom, if ever, moved for the precise opposite reasons: say, because a defendant is wildly popular and the person he’s accused of murdering was considered “possibly the meanest woman in East Texas.”

Nonetheless, that scenario actually happened 15 years ago when wealthy Carthage, Tex. widow Marjorie Nugent, her absence finally a cause for concern rather than relief after several months, was discovered in her garage freezer under various frozen edibles. The immediately confessed culprit was none other than one Bernhardt Tiede II, the town’s beloved assistant funeral home director turned full-time companion to the elderly Mrs. Nugent. The mild-mannered, much-younger Tiede had simply snapped under the weight of her abuse one day, impulsively pumping four bullets into her backside. Trouble was, at least according to the ambitious local district attorney, that pretty much no one in Carthage blamed him, or felt the crime deserved much more than a slap on the wrist.

What might have appeared an obvious case of money-hungry predation to outsiders — after all, Tiede had become the sole beneficiary of Nugent’s will, in theory forever separating the family fortune from already-exasperated relatives she’d estranged herself from — didn’t look that way to townspeople. Bernie was generous to a fault with his own money; once he’d ingratiated himself to Marjorie, he accomplished the impossible and got her to use her money to help the local needy and contribute to charities. (Check forgery allowed this to continue after her death, until he was arrested.) He’d liberated her from a miserly, hermit-like old age, encouraging her to enjoy life on lavish vacations and cultural outings — which he also enjoyed, natch.

But then, Bernie was a tonic to everyone. At the funeral home he’d been a consummate consoler, corpse make-up artist, seller of upscale caskets, and had sung hymns with the theatrical fervor of a musical-theater queen. (He was also highly active in the local community theater.) He doted on all old ladies, while seemingly oblivious to the overtures of women nearer his age. Even if those gay rumors were true, well, conservative Carthage could turn a blind eye in his case.

Ergo the trial was, at D.A. request, moved to more neutral terrain. This bizarre love-story-gone-wrong of sorts is dramatized in Richard Linklater’s delicious new film, an ideal reunion with his School of Rock (2003) lead Jack Black. Bernie has Black as the pie-sweet titular figure, Shirley MacLaine — face like an old leather boot ready to kick a dog — as the formidable Marjorie, and Matthew McConaughey as Danny “Buck” Davidson, the vainglorious D.A. determined to make his name on this case. They’re all great, but in a way the film’s star is its Greek chorus: a colorful array of Carthage townsfolk (many played by actual residents) narrating and commenting on events that, naturally, they still gossip about today.

In town recently for Bernie‘s San Francisco International Film Festival screening, Linklater says the project had a hard time getting financed precisely because of that running pseudo-documentary commentary, nearly all of it lifted from quotes in co-scenarist Skip Hollandsworth’s original Texas Monthly reportage.

“There was so much of it — no one could make the leap with me,” the director explains. “[To funders] it just didn’t seem like a real movie. Yet now [the commentary] ends up a lot of people’s favorite element.” Once his lead actors signed on, things fell into place, although they still had to squeak by on a tight 22-day shooting schedule.

Linklater calls Bernie “my little ambiguous love letter” to East Texas, where he grew up. “It’s a place you get out of if you feel at all different, like I did in moving to Austin,” he says.

Returning homeward to shoot the film, he found locals “suspicious — they think they’re going to be portrayed as hicks — but still very friendly and open. They all had opinions.” He says the case illustrates “how arbitrary our justice system is,” and that once the trial was moved Tiede was prosecuted “for his otherness — [the D.A. describing] him flying first class on vacations to jurors who’ve never been on a plane.”

Wild rumors still swirl in Carthage, from alleged sex tapes (of Tiede and gentlemen friends) to Nugent family members’ belief that Bernie “still has [stolen] millions stashed in Swiss bank accounts.” Linklater scoffs at such unsubstantiated tales — after all, the truth on record is already quite satisfyingly strange enough. 2