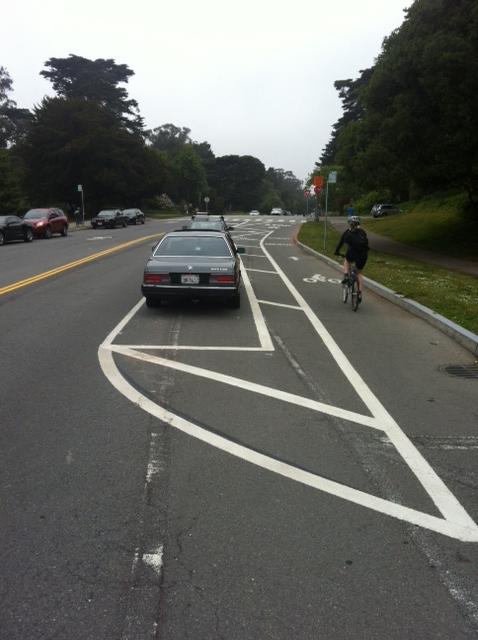 Golden Gate Park visitors have had a couple months to get used to the confusing new lane configurations on JFK Drive – with bike lanes along the edges of the road and a row of parked cars in the middle – and I have yet to hear from anyone who likes this design. Nice try, San Francisco Municipal Transportation Agency, but this design isn’t working for any road users and should be scrapped.

The idea of using a row of parked cars to separate cyclists from motorists isn’t inherently bad, and it has worked well in some European cities. But the way this is designed, passengers exiting vehicles must cross the bike lane to get to the sidewalk, creating a conflict that isn’t good for either user. It was intended to create safer bikeways, but they actually feel more dangerous and uncertain now.

There are buffer zones where motorists aren’t supposed to park, but on busy days they do anyway, with little to fear from parking control officers who rarely venture into the park, often crowding into the bike lane. The design also accentuates the visual blight of automobiles in this beautiful park, with more lanes of cars dominating the viewscape in many spots.

And I’m not the only one who feels this way. After my cover story on urban cycling last week, I got a few notes critical of the new design, including an email from longtime local cyclist Thomas Kleinhenz, who wrote, “When the new Golden Gate Park bike lanes went in I scratched my head. Who dreamt this up. It helps no one. Cyclists now ride in a lane between the curb on the right and parked cars on the left. You have cyclists, roller-bladers, rental bikers, and children all stuck in the same lane with pedestrians trying to get to and from their cars.”

Kleinhenz cited state road design manuals discouraging this kind of design, claiming they may even be illegal. He continued, “When I’ve ridden it, I’ve had to dodge a child darting out from between the cars and a family of 5 who strolled across the bike lane confused about where to go. I’ve also been stuck behind Segways and rental bikers, forcing me and another rider to go out into the traffic lane just to top 5 mph. But of course the traffic lanes are now thinner to make room for the new bike lanes. So we’re left with one non-functional, unsafe lane and another mildly functional unsafe lane. Meanwhile cars have less room to maneuver, and people getting out of their parked cars are forced to try to avoid traffic on one side and cyclists on the other. While cyclists who don’t want to deal with the congestion in the bike lane now must be aware of having car doors opened into them in the now narrower traffic lane.”

His comments are typical of others that I’ve heard, including those from transportation engineers who are similarly baffled by the choices made here. The SFMTA deserves credit for trying something new, but I’ll give them even more credit if they just call this one a mistake and start over. And that is a possibility.

“We’re going to continue monitoring the JFK bikes lanes closely and we will consider potential adjustments to make them more intuitive and user-friendly,” SFMTA spokesperson Paul Rose told us, adding that the agency will analyze changes in traffic speed and volumes for both cyclists and motorists and parking volume, as well as surveying people’s perceptions of the project.

Hopefully some changes will be in the offing, but I think the project is an example of a bigger problem that I discussed in last week’s article, and that is political and civic leaders going with the easy bicycle infrastructure projects so they can claim lots of new mileage rather than the more politically difficult projects we actually need.

Last year on Bike to Work Day, newly minted Mayor Ed Lee announced two bike projects: the JFK lanes and new cycletracks on the dangerous few blocks on Fell and Oak streets to connect the Panhandle with the Wiggle, which has long been a high priority for cyclists as it completes a popular east-west bike corridor. Well, the former project got done and the latter got delayed when neighbors complained about the lost parking spots.

Now, because the SFMTA tried to accommodate motorists with too many new parking spots in Golden Gate Park – despite previous promises to decrease street parking in the park in exchange for building a massive underground parking lot – we’ve ended up with a messy design that only exacerbates conflicts between motorists, pedestrians, and cyclists. In their effort to please everyone, as is often the case, they have pleased nobody.