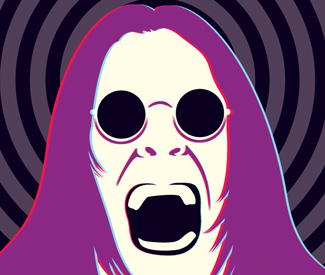 MUSIC It’s pouring outside and the roads are slick with rain. In a warm red room bordered by the soundproof walls of Faultline Studios, a musician stands at a microphone, arching his back and throat singing for a background track to be incorporated in an exhaustive 16-minute cover of “Electric Funeral” off Black Sabbath’s magnum opus, Paranoid (1970).

This weekend at the Independent, that musician — bass clarinetist and composer Cornelius Boots — will perform the song live with his band Sabbaticus Rex & the Axe-Wielders of Chaos, just once, then the group will be shooed off the stage so another act can perform the next track on the album.

This is “Black Sabbath’s Paranoid,” co-produced by Faultline Studios and UnderCover Presents, and co-announced by KALX. There will be eight local bands containing a total of 50 musicians, correspondingly heavy visuals, heavy metal sandwiches, and one classic, influential heavy metal album that battled the Vietnam War and the status quo with doomy despair and Ozzy’s bottomless pit screams.

The covers are almost shockingly disparate, especially taken one after the other on the preview sampler — the complete album, recorded and mixed at Faultline, will be included in the $20 door price of the show. On it, brassy horns explode in the intro to Extra Action Marching Band’s “War Pigs,” buzzy synth and otherworldly bleeps and pings tangle in Uriah Duffy’s “Paranoid” tribute, Charming Hostess plunks out those memorable opening notes of “Iron Man” on airy wood blocks, and Surplus 1980 shreds through a noisy “Rat Salad.”

“We really wanted a lineup that reflected the Bay Area music community as a whole, and didn’t cater to just one dynamic” says organizer Lyz Luke, of UnderCover Presents.

Now in its fourth go around at the one album-one show concept, UnderCover has its system down. During its 2010 beginning — The Velvet Underground and Nico at Coda (now Brick and Mortar) — the live show was recorded on the spot then sold online after it was mixed. For two of the four album cover shows — the Pixies’ Doolittle and now Paranoid — the songs have been prerecorded at Faultline with engineer-producer Yosh!, who is now an official co-organizer of the events.

Yosh!, who also owns Faultline, has spent countless hours recording and mixing these tracks so they’d available in time for the show. He estimates 200 hours over 30 days dedicated to the patchwork remaking of Paranoid. Luke has been busily organizing every minor detail, down to pacing rapid set changes between songs (there’ll be a backline) and ushering bands to the studio the month before.

“Yosh! and I donate a lot of our time,” says Luke, sitting on a couch behind Yosh!’s mixing board. She’s quick to point out the sacrifices of the artists and the venues as well. “I think we’re all trying to break even on this project. It’s more about the spirit of it, and the doors it opens afterwords.” Along with UnderCover and managing local band DRMS, Luke just signed on as director of performance programming at the Red Poppy Arthouse.

In the recording room — having spent the day doing textured throat singing and playing the shakuhachi flute with a trio for more tracks on “Electric Funeral” — Boots says he was as surprised as anyone that he’s been an ongoing participant in this project.

“I don’t like wasting my time these days, playing gigs — if I’m only going to make $20 over four rehearsals and one show and pay for tolls and parking, that’s like, .20 cents an hour or something,” he says. “But after I did the first one, I was like wow, this really has a feeling of an intensive, unified, collaborative, artistic event.”

Paranoid will be his third UnderCover event, and this time he signed on as guest music director — hell, he’s even the one who chose the album, after spending a year mostly listening to only Black Sabbath. For his epic, 16-minute cover, he augmented one of his regular bands Sabbaticus Rex (the other being Edmund Welles), to include the aforementioned shakuhachi flute trio, and gongs. He slowed down the tempo, adding to the doom of the song about nuclear destruction and drug escapism, and had Gene Jun of Sleepytime Gorilla Museum predecessor Idiot Flesh sing in a higher range and build to a thrashing guitar solo. At Faultline, Jun sits behind Yosh!, forever tinkering with an electric, wailing guitar line.

As guest music director, Boots was also in the studio for most of the other recordings; he played clarinet on psychedelic “Planet Caravan” and did the arrangement for Extra Action Marching Band’s “War Pigs” on brass. That song, the rather monumental single that opens the album and hence, the show, has some added bells and whistles. In recording, it was one of the most difficult to capture. “Lots of player and lots of layers,” says Yosh!, “after the first full day of recording I wasn’t sure it was going to work. Then suddenly…it held together and sounded like the group I knew from their shows. It was sort of like the difference between two people clapping and a full room of applause.”

It includes drums, bells, trumpets, trombones, tuba, vocals, and bull horn, along with marching cymbals for “that iconic hi hat pattern.” The modified bull horn comes into play when Mateo uses it to read transcripts of the Collateral Murder Wikileaks video. Coincidentally, Bradley Manning got a hearing the week they finished the song. “For me, it really made the whole project hit home,” Yosh! says. “These songs were written 30 years ago and are still relevant today.”