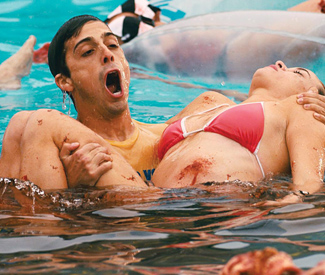 FILM So far, 2012 has been a year of mixed blessings for Hollywood, contrasting mega-hits like The Hunger Games and The Avengers with one of the biggest mega-flops of all time, John Carter. But summer’s really when show-biz turns deadly serious. Each week, there’s a new wannabe blockbuster — pasteurized, processed, film-like products so huge they have the ability to make or break entire movie studios — hoping for returns big enough to make all involved even richer, and insure sequels and spin-offs for summers to come.

But to truly do summer-movie season correctly, you must witness at least one blockbuster, preferably in 3D, preferably clutching the largest package of Sour Patch Kids that money can buy. Get your schedule in order with this handy-dandy, overtly opinionated list of the most-anticipated upcoming flicks. (Dates subject to change, as always.)

May 25: Men in Black 3. Now with time travel! Also, Will Smith, Comedian > Will Smith, Serious Actor.

June 1: Wes Anderson’s latest, Moonrise Kingdom, does battle with Piranha 3DD. Smart money’s on the one with the sharpest teeth.

June 8: Prometheus. I’m so excited for Ridley Scott’s new sci-fi thriller I cut myself off from watching any of the recent, spoiler-y trailers.

June 15: Tom Cruise sings (in Rock of Ages) and Adam Sandler plays Andy Samberg’s dad (in That’s My Boy). Which one will be funnier?

June 22: Pixar unleashes a kick-ass female protagonist in Brave. +1000 for making her a redhead.

July 3: The Amazing Spider-Man. TOO SOON!

July 20: The Dark Knight Rises. With a new villain (Tom Hardy as Bane) and a new Catwoman (Anne Hathaway). C-Bale will prob stick to his trusty sotto voice thing, though.

Aug. 10: Will Ferrell (with John Edwards-style coif) and Zach Galifianakis (with walrus ‘stache) play rival Southern politicians in The Campaign.

Aug. 24: Michael Shannon and Joseph Gordon-Levitt team up for what might be the first bike-messenger thriller since Quicksilver (1986), Premium Rush.

And since you can never plan too far ahead, key fall-holiday movies include: Andrew Dominik’s Killing Them Softly, a re-teaming with The Assassination of Jesse James by the Coward Robert Ford (2007) star Brad Pitt; Rian Johnson’s Looper, a re-teaming with Brick (2005) star Gordon-Levitt; Paul Thomas Anderson’s “I Can’t Believe It’s Not Scientology” drama, The Master; a beer-chugging James Bond in Skyfall; Quentin Tarantino’s Django Unchained; Baz Luhrmann’s “I Can’t Believe He Made It In 3D” The Great Gatsby; and a little something from Peter Jackson entitled The Hobbit: An Unexpected Journey.