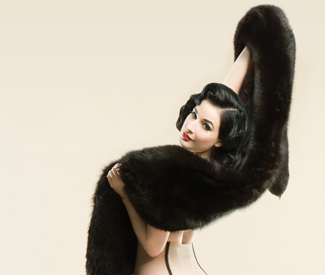 STAGE With a seductive and sexy nod to the past, modern pin-up and burlesque queen Dita Von Teese has been at the forefront of reviving a once nearly lost art form for two decades.

Bringing back the sense of classic style and glamour of the golden days of Hollywood and meshing it with the tantalizing teasing of the old-time burlesque circuit, Von Teese comes to the city this week with her new “Strip Strip Hooray!” show, a 90-minute revue featuring not only her own titillating talents, but a host of other performers as well, including Dirty Martini, Catherine D’Lish, Selene Luna, Lada, Monsieur Romeo, and Perle Noire.

Von Teese — born Heather Sweet, a naturally blond Midwestern girl — first developed an interest in vintage clothing, pin-up art, and classic burlesque after moving to Southern California, where she started working at a lingerie store as a teenager.

“I fell in love with the imagery of women in the 1940s and ’50s, and that [style of] lingerie, and started looking at the history of women’s underpinnings, and that kind of interested me in pin-up art. By the time I was 17 or 18, I started developing and refining my look, and dressing in vintage clothes,” Von Teese says over the phone from Orange County, where she’s preparing for the tour.

After getting involved in the LA’s underground dance music scene in the early ’90s, Von Teese was taken to a local strip club by a friend, where she was exposed to a slightly different style of performing.

“It actually wasn’t a real strip club — it was like a bikini club — so I went there, and thought, wow these girls are doing kind of the same thing I do, but they get paid a lot more money,” Von Teese laughs.

“So as an experiment I started working there with a fake ID, and I became really interested in the history of strip clubs. I started learning more about the art of striptease, and that led me to burlesque. Most of the pin-up models from the 1930s and ’40s were burlesque dancers; if you opened up a men’s magazine from that time, there were a lot of the famous burlesque dancers in them. I kind of just started putting all of these parallels together, and thinking about what I could do to bring this idea back.”

When she first started out, she received some criticisms from people she met that worked in the industry, most notably for her dyed hair and retro look.

“I knew a lot of people that were shooting for Playboy and Penthouse at the time, and they were like, ‘You can’t have white skin and black hair and wear all these clothes. Playboy and all these people want to see a beautiful California blond!’ But I believed there was a niche waiting to be filled, so that’s how I got my start.”

Fast forward past 20 years of hard work and determination, and Von Teese is the top artist at what she does — which is an incredibly diverse array of work, including not only her live burlesque shows, but also a huge portfolio of pin-up and fashion photo spreads, several books on beauty and the art of striptease, and multiple lines of lingerie and make-up.

Although Von Teese has performed all over the world, and is extremely well known in Europe, “Strip Strip Hooray!” is her first headlining tour of the United States — and something she has been wanting to do for some time.

“Sometimes in America I can feel the whisperings of ‘What does she do, anyways?’ Some people think I just dress up in vintage clothes and drive around vintage cars and watch old movies. Or they’ll say ‘Oh, she’s just a stripper.’ With these shows that I make, I’m the producer, director, financer, choreographer — everything.”

Von Teese wanted to make these shows accessible to most any fan that wants to come see her live — promises nothing short of an amazing show.

“I’ve re-invented it for this tour, with a whole new costume, new music, and a new martini glass prop that’s covered entirely in Swarovksi crystals,” says Von Teese. “I’m just doing what I think is the very best.”