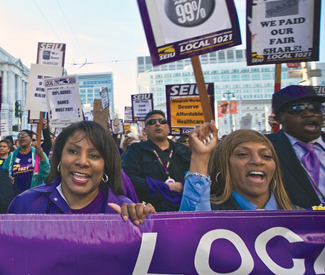 A broad consensus in San Francisco supports reforming the city’s business-tax structure by replacing the payroll tax with a gross receipts tax through a November ballot measure. But the devil is in the details of how individual tax bills are affected, which has divided the business community and given a coalition of labor and progressives the opportunity to overcome the insistence by Mayor Ed Lee and other pro-business moderates that any change be revenue-neutral.

Service Employees International Union Local 1021, San Francisco’s biggest city employee union, last month launched a campaign demanding that the measure increase city revenue, setting a goal of at least $50 million, which represents the amount the city has lost annually since 2001 when 52 large downtown corporations sued to overturn the last gross receipts tax. The union is threatening to place a rival measure on the fall ballot.

“This call for it to be revenue-neutral didn’t make a lot of sense given all the reductions in city services in recent years,” said Chris Daly, the union’s interim political director. “It’s fair to at least get the money back that we lost in 2001.”

The union and the city recently agreed on a new contract that avoids more of the salary cuts that SEIU members have taken in recent years, but workers could still face layoffs under a new city budget that Lee is scheduled to introduce June 1. Lee, Board of Supervisors President David Chiu, and business leaders working on the tax-reform proposal have until June 12 to introduce their ballot measure.

But they don’t yet have an agreement on what the measure should look like — largely because the technology sector (led by billionaire venture capitalist Ron Conway, the biggest fundraiser for Lee’s mayoral campaign last year), the traditional businesses represented by the San Francisco Chamber of Commerce, and the small business community are pushing different interests and priorities.

“The technology industry has to realize they have a tax obligation like any member of the business community does,” Jim Lazarus, the Chamber’s vice president for public policy, told us.

Conway is reportedly using his influence on Lee to push for a model that keeps taxes low for tech companies — even if that comes at the expense of other economic sectors, such as commercial real estate and big construction firms, which will likely see their tax obligations increase. Yet some Chamber counter-proposals could end up costing small businesses more money, creating a puzzle that has yet to be worked out.

But one thing is clear: The business leaders don’t want to see overall city revenue increase. “If there’s anything that is unifying in the business community is that it’s revenue neutral,” small business advocate Scott Hauge told us. “We’re not going to increase revenues, that’s just a given, so if we have to do battle then so be it.”

SEIU and other members of progressive revenue coalition that has been strategizing in recent weeks are hoping to exploit the divisions in the business community and arrive at a compromise that increases revenue, and if not then they say they’re willing to go to the ballot with a rival measure.

“We’re working on trying to recover what we lost in the 2001 settlement and then some,” Sup. John Avalos, who has been working with the progressive coalition, told us. “We have to have something going to the ballot that is revenue generating.”

For labor and progressives, this is an equity issue. Workers have been asked to give back money, year after year, despite the fact that big corporations have been doing well in recent years but haven’t contributed any of that wealth to the cash-strapped city. Labor leaders say that after they supported last year’s pension-reform measure, it’s time for the business community to support city services.

“When we talked about Prop C, we said if our members are doing this with our pensions now, we’ll see next year what businesses do with business tax,” said Larry Bradshaw, vice president of SEIU Local 1021. “Then we read about secret meetings where the labor movement was excluded from those talks.”

Anger over the “secret meetings” of business leaders that Lee assembled to craft the tax reform measure — meetings at which no labor leaders were included — helped inspire the fierce protest campaign that defined the SEIU’s recent contract negotiations.

In the first weeks of negotiations, workers were already up in arms. Protest marches at SF General Hospital and Laguna Honda Hospital brought hundreds of hospital workers to the streets. These hospitals serve some of the city’s poorest populations: Laguna Honda patients are mostly seniors on Medi-Cal and General is the main public hospital serving the city’s poor.

On April 5, city workers got creative with a street theater protest that involved six-story projections on the iconic Hobart Building. Protesters dressed as rich CEOs and handed out thank-you cards to commuters at the Montgomery transit station. SEIU’s “The City We Need, Not Downtown Greed” campaign included a website (www.neednotgreed.org), slick video, and direct mailers portraying CEOs as panhandlers on the street asking city residents, “Can you spare a tax break?”

The most dramatic civil disobedience came on April 18, when more than 1,000 workers rallied outside City Hall — along with several progressive supervisors — and then marched to Van Ness and Market. Protesters blocked the street, resulting in 23 arrests. At that point, increases in health care cuts and pay cuts to city workers were still on the table.

That was followed the next week by hundreds of workers staging noisy demonstrations in City Hall, and then again on May Day when SEIU workers were well represented in actions that took over parts of the Financial District.

In the end, the demands of union representatives were met in the contract agreement. Health care cost increases and pay cuts were eliminated, and a 3 percent pay raise will kick in during the two-year contract’s second year, a deal overwhelmingly approved by union members. Labor leaders hope to use that momentum to force a deal with the Mayor’s Office on the tax reform measure — which some sources say is possible. Otherwise, they say the campaign will continue.

“We may end up on the streets gathering signatures soon,” Daly said. “We need to figure it out in the next few weeks.”

The Controller’s Office released a report on May 10 that made the case for switching to a gross receipts tax and summed up the business community’s meetings, and the report was the subject of a joint statement put out by Lee and Chiu. “After months of thorough analysis, economic modeling and inclusive outreach to our City’s diverse business community, the City Controller and City Economist have produced a report that evaluates a gross receipts tax, a promising alternative to our current payroll tax, which punishes companies for growing and creating new jobs in our City'” the statement said. “Unlike our current payroll tax, a gross receipts tax would deliver stable and growing revenue to fund vital city services, while promoting job growth and continued economic recovery for San Francisco.”

Daly and Avalos say progressives agree that a gross receipts tax would probably be better than the payroll tax, and they say the controller’s report lays out a good analysis and framework for the discussions to come. But despite its detailed look at who the winners and losers in the tax reform might be, Daly said, “We haven’t seen an actual proposal yet.”

Lazarus made a similar statement: “Nobody likes the payroll tax, but the devil is in the details.”

But it’s clear some businesses those with high gross receipts but low payrolls — would pay more taxes. For example, the finance, insurance, and real estate sector now pays about 16 percent of the $410 million the city collects in payroll taxes. That would go up to about 21 percent under a gross receipts tax.

“Several industries that could face higher taxes under the proposal, such as commercial real estate, large retailers, and large construction firms, felt the increase was too sharp,” the report said under the heading of “Policy Issues Arising From Meetings with Businesses.”

The report highlighted how the change would broaden the tax base. Only about 7,500 businesses now pay the payroll tax (others are either too small or are exempt from local taxation, such as banks), whereas 33,500 companies would pay the gross receipts tax, which the report identified as another issue to be resolved.

“While some businesses appreciated the base-broadening aspect of the gross receipts proposal, others felt that too many small businesses were being brought into the Gross Receipts tax,” the report said. Hauge also told us that he fears a tax increase on commercial real estate firms could be passed on to small businesses in the form of higher rents. “I don’t want to see the business community split,” Hauge said, although it’s beginning to look like that might be unavoidable. The big question now is whether progressives and labor can find any allies in this messy situation, and whether they’ll be able to agree on a compromise measure that all sides say is preferable to competing measures.