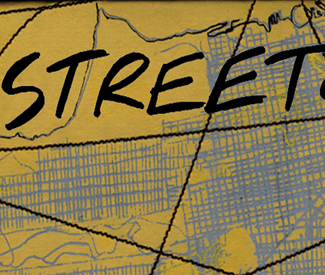 VISUAL ART When I moved back to San Francisco as an adult, writer Erick Lyle taught me about my city. He didn’t tell me about the earthquakes, the mayoral assassinations, or the hills, but rather how to recognize the social forces that would push and pull life in San Francisco over the years to come. And right now, that’s an important thing to know about.

Lyle came up in the SF zine scene in the 1980s and ’90s, the milieu that was gutted and dispersed by the time the first tech boom exhaled its final shuddering gust of pixels and order-by-Internet groceries — and, full disclosure, his words can often be found right here in Guardian feature articles. His book On the Lower Frequencies: A Secret History of the City (Soft Skull Press, 224 pp, $14.95), which he wrote based on those years working at the Coalition on Homelessness and on his zine Scam in the muck and magic of Sixth Street, was to be an essential text for any creative, “scruffy ’cause I’m broke not because of expensive hair product” types scrapping around in a city that was trying to price them out of living there.

“Streetopia,” the boundless art show and event series curated by Lyle and local artists Chris Johansen and Kal Spelletich, based in and around the Luggage Store Gallery (Fri/18-June 23) takes note of the struggle for a San Francisco where underground art doesn’t mean street artist David Choe’s murals in the Facebook offices and rents are far beyond the reach of anyone without stock options. But the month-and-a-half-long extravaganza is going to be far from a bummer.

This is what Lyle is quick to impress on me when we meet up to chat at Mission Pie. “This show is not a protest,” he says. “I believe strongly in what you’re for, not what you’re against. This show is for showing what we’re for.”

Judging from “Streetopia”‘s lineup, that’s a tactic that is resonating with SF artists. To list everyone who is getting in on the show would take up the rest of this article, but I’ll name drop a few. Ex-Guardianista and ace investigative reporter A.C. Thompson is teaching a class on amateur public investigation (“Muckraking for Anyone” June 5, 7:30pm, free.) A film festival is planned showcasing movies by queer auteurs Travis Matthews, Veronica Majano, Lares Feliciano, and others (“Queer Filmmaking in SF in the Era of Gentrification” June 2, 8pm, free. Luggage Store Gallery). May 18’s opening celebrations will feature streetside dance by Brontez Purnell and Amara Tabor Smith, and other live works by Lovewarz, Strawberry Smog, and Shaun O’Dell.

As for space-making: Sy Wagon will be turning the Tenderloin National Forest into a free cafe, a space for all to come make, eat, or donate food. “It’s not the soup kitchen model,” says Lyle. “It’s a place where people can actually share recipes, cook food together.” Vacant storefronts will be commandeered to show art along Market Street (much like the Art in Storefronts program that is orchestrated by SF Arts Commission.) The Luggage Store itself will be filled with a temporary theater, library, and of course, artwork made by the likes of three-dimensional wunderkind Monica Canilao.

For a stretch of Market Street that has become a battleground in the conflict over whether the rapidly-expanding tech bubble actually benefits SF residents, “Streetopia” could be an excellent representation of an alternative — a community-based look at how we can better SF.

We can at least share a rueful laugh while comparing the TL National Forest’s free cafe with its oh-so-techie counterpart, the ninth-floor cafeteria that Twitter is building for its workers at its new office site on Market between Ninth and 10th Streets. If that company’s employees are really going to be reinvigorating the local businesses, Lyle asks, why construct private eating quarters?

“We’re giving tax breaks to companies that allow people to meet in a virtual space,” Lyle tells me in a rare deviation from the positive language he uses to describe his high-aiming community arts project. “But this show will really show that vibrancy that is right here.” Deeper than the ninth floor, natch.

CORRECTION: An earlier version of this article omitted the names of co-curators Chris Johansen and Kal Spelletich. The Guardian regrets the error