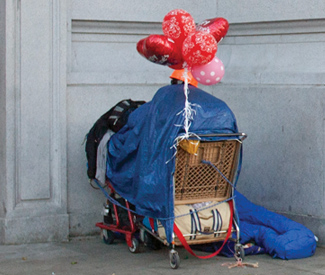 It was 11pm on Thursday, May 3, and the ballet was just letting out. Affluently dressed dance enthusiasts streamed arm in arm down Grove street towards the Civic Center BART station chatting about the evening performance. That night’s show of Don Quixote at War Memorial and Performing Arts Center was likely excellent judging by the theatergoers’ exuberance.

As they passed by the Bill Graham Civic Auditorium, a half-dozen homeless people seated along the route begged the procession for change. Across the street and a block down Grove, a few homeless individuals had bedded down for the night in front of the Main Library.

It is these encounters, normal to urban life, that are at the center of a controversial strategy by Another Planet Entertainment, which leases the auditorium from the city, to drive the homeless away. They hope that by blasting a late night sampling of industrial noise through the venue’s sound system between the hours of 11pm and 7am, making sleep nearly impossible, that the homeless will be discouraged from congregating there.

A women selling the Street Sheet newspaper on the corner sums up the social tension that invoked the strategy. “They’re doing it to keep the homeless from sleeping there. All these people don’t want to see the homeless when they come through here,” she said, gesturing to the now thin stream from the ballet.

She had heard the noise over the past few nights and described it as deafening. “The first time I heard it I thought the building was under construction, then I thought a motorcycle gang was coming through. It is so bad it makes the windows of the building shake.”

Another Planet had no comment on the racket and would not say if the strategy would continue. But in an interview with the San Francisco Chronicle, company founder Gregg Perloff said the venue has had “an enormous amount of complaints” from their patrons about the homeless.

Late at night, police are powerless to respond to such complaints. The city’s carefully crafted sit-lie ordinance, which bars people from assuming either of those postures on city sidewalks during the day, is lifted between the hours of 11pm and 7am to satisfy constitutional concerns that have overturned similar ordinances in other cities.

“This it the first time I’ve heard of a strategy like this used against the homeless,” Bob Offer-Westort, civil rights organizer with the Coalition on Homelessness, said of the noise. “It is really problematic for a business to say that people on public property not breaking the law are a public nuance. It is a intrusion of a private company on public space.”

Standing in front of the building late on a foggy night, it’s easy to see why the homeless would gravitate to here. The building’s huge awning, covering much of the broad sidewalk, must be the easiest place to stay dry outdoors for many blocks. And since the demolition of the city’s old central bus terminal last year, it is perhaps the largest dry public space in the city’s core.

But is this sonic attack even legal? That’s a question that the Mayor’s Office and the San Francisco Police Department, neither of which answered our repeated inquiries, don’t seem to want to address.

San Francisco’s noise ordinance is a weighty document. Most cities suffice with a paragraph or two to regulate noise, while San Francisco’s ordinance runs nine pages. Noise, or rather the relative lack of it, seems of great importance to the city. There is even a city committee on noise.

The reason for the seriousness the city gives the issue of controlling excess noise is expressed in the very first paragraph of the noise ordinance: “Persistent exposure to elevated levels of community noise is responsible for public health problems including, but not limited to: compromised speech, persistent annoyance, sleep disturbance, physiological and psychological stress, heart disease, high blood pressure, colitis, ulcers, depression, and feelings of helplessness.”

Many of the cities homeless already suffer acutely from conditions on this list. Asked how an already vulnerable population could be affected by random industrial noise known to (and in this case intended to) cause agitation, Offer-Westort said, “It’s crazy to try to create these conditions, they are quite literally trying to create a civil disturbance, and not on their own property, but in a public space.”

With the adverse effects of noise pollution well-outlined, the ordinance goes on to state, “In order to protect public health, it is hereby declared to be the policy of San Francisco to prohibit unwanted, excessive, and avoidable noise.”

The ordinance pays particularly attention to licensed entertainment venues like the Bill Graham auditorium: “No noise or music associated with a licensed Place of Entertainment shall exceed the low frequency ambient noise level defined in Section 2901(f) by more than 8 dBC.”

As a matter of comparison the difference between a whisper and a quiet conversation is roughly an eight decibel increase, a relatively narrow margin. It seems reasonable that if you’re standing outside a venue, and the music coming from inside sounds louder than the person talking next to you, the city’s noise ordinance has been exceeded.

So motorcycles, saws, and other industrial sounds that were described at the auditorium late at night would range around 100 decibels without being amplified. Amplify it enough to shake the window in the building, one can assume it’s louder than a power tool, louder by far than the noise ordinance permits.

Everyone who has ever held a loud late night event in the city know the consequences of breaking the noise ordinance. A knock on the door by the SFPD that comes with a ticket and the end of your gathering. Do it again in a year and the fines doubles.

The strategy at the auditorium seems to be having some effect, but where the homeless will be shuffled off to is anybody’s guess. The reality of the homelessness crisis is there is no place for the homeless to simply move off too. With their numbers in the thousands, only bold political action on behalf of the city’s leadership can solve the problem.

“The root of the problem is that people can’t afford rent. Everyone who rents in San Francisco knows that it is way too expensive to live in this city,” says Offer-Westort. “We stopped creating public housing. Housing has become a commodity, an investment rather then a home, and that has driven up prices.”

Passing back through the area later at night, the building was quiet for the moment. A tow truck was loading a car out front with a beeping alarm, a motorcycle roars by, a boombox is playing across Civic Center Plaza, a man is yelling around the corner only to be drown out by a broken wheeled shopping cart clanking by. If this is the normal late night quiet of the streets, it’s a wonder the homeless get a moments sleep at all. But the building itself remains quiet right now.

A lone homeless man has bedded down in front but has not yet fallen asleep. Young and dreadlocked, he tells me that he has been in town only two days and is unaware of the controversial blasts of noise.

“God I hope they don’t do that,” he said from his sleeping bag. “It’s supposed to rain tonight. Why would they do that? As long as you are up before sunrise and move on, who are you bothering?”

And here in front of the auditorium in the middle of the night, with the concert patrons at home getting a comfortable night’s sleep, the question seemed valid. “It’s mean spirited. I think that we as society agree noise should be maintained at a reasonable level to not bother your neighbors,” said Offer-Westort. “The fact that their neighbors are homeless doesn’t mean they are not part of society.”