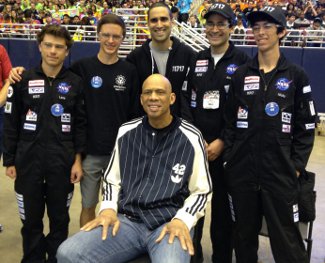 Well, my addiction to robotics continues as the fabled Dos Pueblos Robotics Team 1717, led by my grandson Nicholas Perez as the ace driver,  has been ranked number one in the world out of 2,332 robots. The team is from Dos Pueblos High School in Goleta, California.

It was a splendid finale to a bittersweet season for the team.Team 1717 had breezed through the regionals and competed flawlessly in the early rounds in the national competition in St. Louis, but encountered mysterious communication problems in the final rounds and never made it to the championship round. The DP spokesman said, “clearly there’s a difference between winning the competition and being number one in the world.”

The team won a spectacular series of awards in the most sophisticated robotics competition in the world.  First place in the Los Angeles and Central Valley regional competitions. Innovation control award in the Central Valley regional. Zerox creativity award and Number l robot in the St. Louis world championship competition. Number l robot out of the 2,221 first robots as named by the Chief Delphi Offensive Power Ranking, the official authority for FIRST robotics rankings.

This was a remarkable year for the Dos Pueblos robotics team under Coach Abo-Shaeer.  It helped dramatize “the new cool” and how high school robotics is coming up fast behind football, basketball, and soccer as a major high school sport.  A past 1717 team and Coach Abo-Shaeer were featured in a book “The New Cool” by Neal Bascomb.

The robot is named Lindsay Rose after a classmate who died in a freak surfing accident in Goleta in her freshman year. She would have been a senior this year.  The rallying cry of the team was “Lindsay Rosebot, show us what you’ve got.” Her parents attended the championship competition in St. Louis.

The Dos Pueblos video was filmed by Emily Thomopson and Yibing Zhangand and put together by Mariel Bildstein, Phillip Hampton, and Jacob Moghtader.

Read more about the competition here and view a video of all the action below.