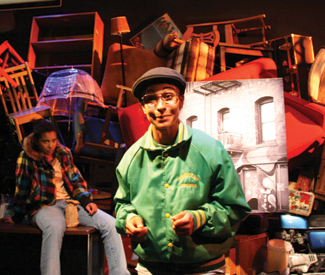 THEATER A couple of days after the opening of the Cutting Ball’s documentary play, Tenderloin, I spotted independent filmmaker Rob Nilsson crossing the street at Taylor and Eddy, less than a block from the theater. Drawn to the neighborhood and its residents for decades, Nilsson is one of the more prominent artists who have found inspiration, collaboration and a kind of authenticity in the Tenderloin, long among San Francisco’s poorest and liveliest districts.

Director-writer Annie Elias and her Tenderloin team continue this tradition, with a clear concern to do right by their subjects (among whom happens to be Nilsson himself, played by actor Tristan Cunningham). The action emerges from an opening tableau of street life, featuring the colorful sights and harrying sounds of a rowdy inner-city intersection (nicely augmented by sound designer Matt Stines). Upstage rises scenic designer Michael Locher’s ceiling-high mound of furniture and bric-a-brac, which is fronted by two rows of hanging photographs, loving portraits of local people and places whose panels double as projection screens establishing context for each of the scenes that follow.

The play presents a spectrum of Tenderloin denizens whose stories reflect the dire straits normally associated with this congested low-income slice of downtown, but also the sense of freedom and community some have found there. We hear from the desperate and lonely but even more often from people who have grown to prefer the Tenderloin to more stifling environs.

That positive note lands too forcefully at times, especially when it comes from relatively privileged members of the commuting class (the plugging of the neighborhood by some middle-class patrons at the Nite Cap bar, for instance, begins to sound a little like an ad from the visitors bureau), or professional advocates like Reverend Karen Oliveto (played by Leigh Shaw) at Glide Memorial Church.

By contrast, the play excels when the voices are both genuinely local and agenda-free, as is the case with the story by a man from Sixth Street who haplessly agrees to accept responsibility for a newborn baby from an acquaintance on her way to jail (a story as charming and resonant as a well-crafted short story, and beautifully recreated by actor Michael Kelly).

A set of discrete interviews naturally runs the risk of becoming an aimless narrative, especially without a single dramatic episode or storyline at the center (as is the case with the better-known works in the docudrama genre, such as Tectonic Theater’s The Laramie Project). Elias sets out to mitigate this problem in several ways, first of all by casting well — in terms of both the selection of interview subjects and the delicate portrayals marshaled by her exceptional ensemble of actor-documentarians (aided by additional writing from David Westley Skillman).

In addition to Michael Kelly’s standout performance throughout, Rebecca Frank does particularly subtle work with a number of memorable personalities, including Leroy B. Looper, the (recently deceased) owner of the Cadillac Hotel, who appears here with wife and longtime business partner Kathy (played gracefully by David Sinaiko). (Siobhan Doherty rounds out the production’s admirable ensemble.)

Elias also relies on dynamic staging, often setting a couple of interviews in alternating tension with one another, a technique that generally serves the production well — as in a sly point-counterpoint between former Tenderloin police captain Gary Jimenez (Kelly) and a homeless person (Cunningham) — even if some scenes prove unnecessarily busy.

But the narrative that emerges, which lays a heavy emphasis on “stripping back the layers” and revealing the truth of the much-maligned district, suffers from the accumulation of a familiar liberal slant toward tolerance and understanding. To the extent it undercuts outrage at a larger system of extreme and degrading inequality, such a slant obscures as much as it reveals. *