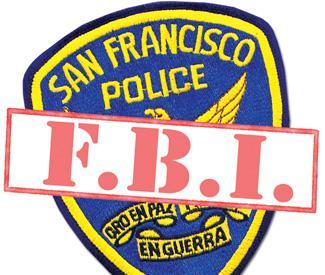 Coalition members trumpeted what they called “historic civil rights legislation,” but this watered-down version of legislation that Lee vetoed last month doesn’t offer the same guarantees and codification of privacy principles as the previous version, which was approved on a 6-5 vote of the Board of Supervisors, whereas this new version won unanimous approval.

Its endorsement by the most conservative supervisors – those most deferential to the SFPD, politicians who routinely vote against even the most innocuous progressive legislation – is a sure indicator that the legislation doesn’t really do much to clips the wings of the SFPD, which initiated this controversy with a secret 2007 agreement with the FBI that federalized local officers.

That was precisely the objection to the initial legislation that were offered by Lee and Suhr, that it codified local privacy protections with specific limits on SFPD officers engaging in surveillance on citizens who had broken no laws, and that it subjected any future agreements with the FBI to approval by the Police Commission. The new legislation is far more vague.

“It is a step in the right direction, there’s no doubt it’s progress, but whether it’s real progress depends on the implementation,” says John Crew, an expert on police practices with the American Civil Liberties Union-Northern California, which unearthed the 2007 secret memo.

Crew has worked on this issue for years and has been troubled by the FBI’s claims that local laws don’t apply to federalized agents, with the SFPD’s resistance to allowing specific limits to be codified in local law, and with the deferential position Lee has taken to the SFPD. Crew said the strongest part of the new ordinance is the explicit statement that local officers can’t ignore local and state laws, but the details of how that’s applied weren’t really addressed in this new version.

“The question now is will there be a vigilant, meaningful, and sustained effort to implement this law and will there be sufficient transparency,” Crew said.

Two of the strongest advocates for the new law, Nasrina Bargzie of the Asian Law Caucus and Zahra Billoo of CAIR-SFBA, say the compromise version addressed their main issues and is worth celebrating, but they agree with Crew that its strength will ultimately depend on how it is implemented.

“We don’t see this as the end. We need to make sure it is implemented properly,” Billoo said, calling it a “watered down version” of the stronger and more specific initial legislation.

For example, the legislation calls for annual reports on FBI-SFPD activities, but it doesn’t go into much detail on what those reports will include.

“Part of what we’re going to do is communicate with the stakeholders about what we expect those reports to look like,” said Nasrina Bargzie, a coalition member from the Asian Law Caucus, noting that they would like to base them on the work that has been done in Portland, Ore., which has been a leader on the issue. “It’s going to require us to watch those trouble spots during implementation.”

He called San Francisco “one of the strongest communities of concern about civil rights in the country,” and as long as that remains the case then this legislation could be an important vehicle for protecting civil rights. But the real question is what happens when there’s another terrorist scare and the JTTP decides civil liberties are secondary to beliefs that the police state and its surveillance efforts needs to be beefed up. Or when the police state decides to simply refuse to disclose is activities.