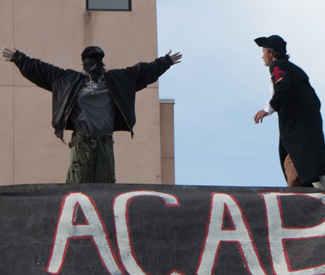 The brick-throwing man whose projectiles hit two protesters at the Occupy San Francisco takeover of a Turk Street building on May Day has helped spark intense internal debates in the movement about the use of violence.

But nobody has heard the alleged hurler’s side of the story.

Jesse Nesbitt, 34, was arrested on the scene, and is accused of felony assault, assault on a police officer, and vandalism. I interviewed Nesbitt in San Francisco County Jail May 3. He spoke of his associations with drug addicts and revolutionaries; his previous stints in jails, prisons and psych wards; and his countless arrests on the streets of San Francisco for illegal lodging.

What emerged was a picture of a homeless Army veteran who suffers from untreated mental illness and substance-abuse issues — someone who found a degree of help and solace in the Occupy movement but has never fully escaped his problems. His story is, unfortunately, not unusual — there are many thousands of vets who the system has utterly failed.

Nesbitt told me he was diagnosed as schizophrenic at 16. “From bad things happening, my mental illness has snowballed since then,” he explained.

Nesbitt said he grew up in the projects outside Pittsburgh, Pennsylvania during the 1980s. “It wasn’t too nice,” he explained. When he was 18, he joined the Army.

“I wanted to join the military all my life. That’s what I wanted to do,” he said. The schizophrenia could have stopped him — but “I lied my way in.”

His tour in Korea was during peace time, but he says he still saw combat. “We were supposed to be at peace with North Korea, in a ceasefire. But whenever they got a chance, they shot at us. And whenever we got a chance, we shot at them.

“It hardened my heart. And it gave me a sense of duty to uphold our Constitution.”

Nesbitt returned from South Korea in 1996. Afterward, “I hitchhiked from coast to coast twice. I got married three times. I have a kid in Pennsylvania. I went to jail in Pennsylvania for — being young and stupid,” he said.

Later in the interview, he expanded on his prison time in Pennsylvania. “I did four years and eight months for aggravated assault, theft, and possession of an instrument of crime,” said Nesbitt. “I also did time in Georgia for assault. And I did time in Alameda County for vandalism and weapons.”

In fact, as he tells it, Nesbitt’s time in Berkeley was spent mainly in jail, before he got involved with Occupy Berkeley.

“I don’t know how much time I did in total in Alameda County. I’d be in jail two, three weeks, get out five, six days, then get arrested again. That was from last April to July,” he says.

On the days when he was free, “I was doing what I normally do,” said Nesbitt. “I’d squat somewhere. In the daytime I’d panhandle, go to the library. I was doing a lot of drinking. Then I started getting arrested a lot when I started doing meth.”

That was his life before joining Occupy. “A friend of mine who was shooting heroin at the time said, let’s go join the revolution. It will help clean you up. It helped pull me out of a drug addiction and keep me healthy,” said Nesbitt.

But that wasn’t the only reason he joined.

“I’ve always had revolutionary beliefs,” he says. He spoke of his friends in Pittsburgh. They wouldn’t let him go the G20 protests in 2009, fearing he would be incited to violence.

“I’ve been involved with anarchists for a long time. They pointed out documentaries I should watch, things I should read,” said Nesbitt.

But the example he gave me isn’t your classic Emma Goldman. Nesbitt remembered “The Esoteric Agenda” — a conspiracy-theory film that connects stories about corporate greed with apocalyptic prophecies.

“The education was getting me ready for something,” he said.

At Occupy Berkeley, even while Nesbitt recovered from his meth addiction, he continued to live in a cycle of violence.

“It was in Berkeley out at the Occupy camp. I got into a fight with somebody, I was in a black out. It took six cops to hogtie 135-pound me, so I was talking shit. While I was hogtied, they dropped me on my head. I went from talking shit to unconscious. I slept for the next two weeks,” Nesbitt told me.

His involvement with Occupy San Francisco increased after the Occupy Berkeley encampment was taken down.

Occupy San Francisco, however, didn’t quite progress the way he had hoped. “When they started raiding us in December, I was hoping the numbers would go up. Instead they dwindled,” said Nesbitt.

He was part of a small group of people continuing the “occupation” tactic outside the Federal Reserve Building at 101 Market St. Back in the fall, that sidewalk was a spot where dozens of people held protest signs and meetings all day and many slept throughout the night. After a series of police raids, and as most of those organizing with Occupy moved on to different tactics and projects, some decided to remain there.

Even when the Justin Herman Plaza camp was in full functional form, it was derided as “nothing but a homeless camp.” There were homeless people there, but many found food and other resources, as well as security from both police and other people they feared on the street, leading many to devote themselves to the goals of the protest movement.

The 101 Market camp that emerged in February was mostly a homeless camp — and, although the people there remained fiercely political in their convictions, they certainly didn’t enjoy the safety that the Justin Herman camp once provided.

Nesbitt was one of those people. “The SFPD not letting us sleep, telling us sitting on cardboard was lodging, sitting under a blanket to stay warm was lodging, you can only take so much of it,” he said. “They slammed my head against the back of a paddy wagon last time they arrested me for sitting underneath a blanket.”

His story is not unusual.

“Veterans continue to lead the nation in homelessness,” explained Colleen Corliss, spokesperson for the veterans-aid nonprofit Swords to Plowshares. “There are a lot of factors at play. Those who go to war have a higher instance of mental illness and substance abuse, which ultimately can lead to a vicious cycle of homelessness,” she said. “Even if you serve during peace time, you can still have really traumatic experiences.”

Nesbitt’s experience with the city’s mental health facilities wasn’t enough to break this cycle. “I did get 5150-ed,” he said, describing the term for involuntary psychiatric commitment. “I was in the hospital less than 24 hours, they kicked me out.”

Why? “I threatened to kill a doctor,” said Nesbitt.

Nesbitt’s 24-hour stay was in the overburdened, short-staffed psych ward at San Francisco General Hospital. When the psych wards began closing beds in 2007, it was comprised of four units, each with 30 beds; it is now down to one unit, according to Ed Kinchley, a social worker in the medical emergency department at General.

There’s also a floor in the behavioral health center for psychiatric patients with 59 beds, but “they told the staff last week that they’re planning to close 29 of those beds.”

“Since [the beds] are full almost every day, the bar or the standard for who stays there or who goes in-patient is a lot higher than it used to be,” said Kinchley.

Whatever the reason, Nesbitt was not getting treatment the day of the alleged brick-throwing — and he was having problems. “I was getting an episode the day before it all happened,” he said. “I was afraid to go by myself to sleep because I was hearing voices. Normally those voices tell me to hurt people. I try to keep around people I love and trust that wouldn’t let me do anything.”

Mixed with his schizophrenia is a brand of Constitutionalism that’s not common on the left.

“When you join the military or the police department, you take an oath swearing to defend the United States Constitution against all enemies foreign and domestic,” Nesbitt said. “Now they’re passing the NDAA, Patriot Act, and other bills I don’t know about. They’re intentionally taking away our constitutional rights. We’re supposed to defend those rights, not lie down and take it.

“I think Abraham Lincoln said, if the government betrays us, we’re supposed to take them out.” Nesbitt insists he’s “not a terrorist. No matter what they might say about me in the Chronicle or whatnot, I’m not a terrorist. What is he, then? “I’m a freedom fighter,” said Nesbitt. “I’m fighting for the freedom of everyone.”