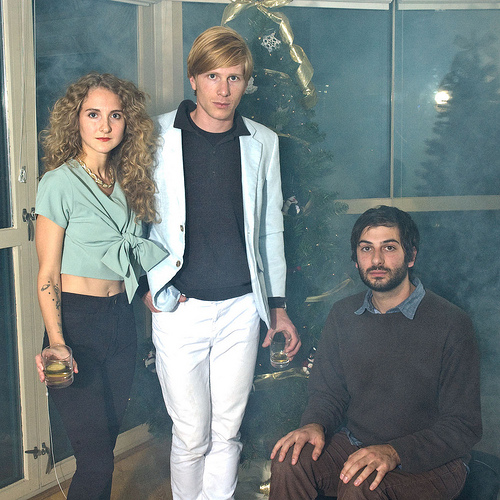 Some people look to surf pop as their go to summer soundtrack. But what if, for once, you were to venture off the shore and in to the deep blue sea? You will need a sailboat and a perfectly warm, hazy breeze to put wind to your nautical journey.

Tennis — made up of husband and wife duo Alaina Moore and Patrick Riley along with drummer James Barone — is an indie-rock band from Denver that began on board during the couple’s eight-month sailing expedition.

In anticipation of the band’s sold-out show tonight at the Independent, Moore talked with the Guardian during a phone interview about how their post-college nomadic experiment turned in to a band.

SFBG How did you and Patrick first meet?
Alaina Moore Patrick and I met in college in a class where I happened to be one of the only two girls in the entire class — so the odds were in my favor I suppose. We became best friends, and years later, here we are.

SFBG Why “Tennis?”
AM No reason really. I would tease Patrick a little bit about playing tennis seriously when he was growing up because I grew up in a neighborhood where there wasn’t even a tennis court in sight — people only played basketball.

But besides that, it literally means nothing. When we named our band, we didn’t even consider ourselves to be a band and there were no plans on playing on stage ever.

SFBG What motivated you to make music, and more specifically, these types of retro-styled records?
AM I had a rediscovery of 1950s pop music during our sailing trip. The Shirelles song, “Baby It’s You,” happened to be playing in a bar. And I mean, who doesn’t love that song?

But that night, I started noticing the way the voices sound, the ways the song was mixed, and how the drums were recorded — I never noticed those nuances from an old song before. We started making music emulating analog recording techniques from the ’50s and ’60s, and it unraveled in to us writing a record of our sailing trip.

SFBG A sailing trip with just you two?
AM Yeah, we went on a trip around the Eastern Seaboard of the North Atlantic. Patrick and I had been together for about a year when we started trading literally every material possession that we had for a sailboat. We were poor college students then and didn’t have that much, so we sold every single thing, emptied our bank accounts, and traded our entire lives for the trip.

SFBG Did you start writing songs for the first record at sea?
AM We didn’t really write anything that was meant to be a song until six to eight months after we came back from our trip. But a lot of the lyrics for the first record were taken from my ship log. I took very careful journal entries. And in that sense, the narrative of Cape Dory is very straightforward and linear.

SFBG The mood for your songs are pretty breezy and light-hearted.  I can’t imagine the entire trip was smooth sailing though. Were there any rocky moments?
AM Oh, there were plenty. The most difficult part of the experience for me was how trying and often scary ocean sailing turned out to be compared to what I imagined romantically in my head.

Sailing is technically, psychologically — really hard in every possible sense. I would say an even mix of the lyrics of Cape Dory reflect some of these dark parts of the experience.

SFBG Do you still find time to sail now that you’re on tour?
AM We still have our sailboat and think that it’s a great way of turning our lives upside down. And by that, I mean that it feels like a clean slate whenever we come back from a trip. Being on tour and living on the road, in a bus, is a really weird lifestyle that makes us increasingly more misanthropic. But then we go sailing for even a month and we become hopeful and optimistic about humanity again.

SFBG How is it working with your husband?
AM We’ve learned that two cooks in the kitchen is all we can handle as far as song writing goes. But it is honestly really hard at times to have this intimate of a relationship and work together too. So on the road and on stage, it’s very important to have a full band with other creative minds involved in translating our songs from paper.

SFBG Has the success of Cape Dory influenced the way you two produced Young and Old?
AM The writing process for our second record was a continuation of our experience with Cape Dory. We’re still figuring out what “success” even means to us, because everything is so relative. In music, sometimes all others can do is compare you to other musicians.

And it’s hard even for us to wrap our heads around our own position because of how ambiguous music is. So we try to look inward, keep writing songs as long as it feels good to us, and produce what we’re happy with.