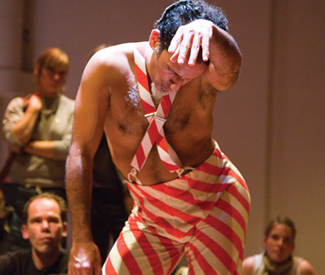 DANCE David Zambrano: never heard of him? That just means you’re not a member of the international dance community, where he is a superstar. Accolades, particularly about his teaching, flood the internet; phrases like “genius,” “not to be missed,” and “has changed my life” abound. The only complaint I could find was from a disgruntled student who said “the class was so full that I could barely see the teacher.”

So who is this Venezuelan-born, Amsterdam-based, globe-trotting dancer-choreographer-teacher who engenders such enthusiasm and yet is so little-known in this country? Starting this weekend, Zambrano (re)introduces himself with the West Coast premiere of Soul Project, a series of solos, each one based on an American blues song. They will be performed — in a sequence to be determined just before each show — to an audience seeking out the dancers.

Zambrano is best known for re-thinking improvisation as a tool to freshly connect dancers to the physics of their bodies — and its relationship to the environment. In the process, he developed a technique he calls “flying low,” which examines dance’s unavoidable partner, the floor, in order to find efficient ways for giving into and rebounding from the ground. Fundamental questions Zambrano asks revolve around essential concepts: how do two dancing bodies change the space on a stage? What is the relationship between intimacy and community? How can movement be best used as a means of transmitting information?

If these topics sound esoteric and theoretical to most of us, to dancers they embody the core of what they do. One admirer is San Francisco dancer-choreographer Keith Hennessy, himself no slouch in the thinking-about-the-fundamentals-of-performance department. He first took a workshop with Zambrano at Dancers’ Group in the mid-1990s and has watched his work ever since.

“I’m a huge fan of his teaching,” says Hennessy. “His classes are a kind of inspirational ritual. He teaches dancers to circulate energy with the earth and the other dancers, through their own bodies and then through space.”

He appreciates Zambrano as a performer “who loves dancing, moving, flying. He travels through space quickly, with the fastest of small precise steps — running and running, before diving or sliding into rolling on the floor, and always spiraling up and down and around.”

Hennessey, who has seen a fair amount of Zambrano’s work, including four improvised duets in 2010 which he describes as “truly joyful,” is looking forward to the upcoming performances because “I haven’t seen him do anything like this before.”

One who has already seen Soul Project is choreographer Ralph Lemon, who remembers Zambrano as a major force in New York’s Downtown improvisation scene until his move to Amsterdam in 2000.

“I hadn’t seen his work for years,” Lemon explains. “I saw Soul Project in 2008 at a summer dance festival outside Paris. I saw a lot of work at the time, yet this is the one that made me want to dance. I was so moved by the project because this is music I grew up with.”

He adds, “For me as a black American this was curious, particularly since there were no black Americans in the cast. There was only one American — and she was a white woman who had moved to Brussels.”

So when, in 2010, New York’s Dancespace asked Lemon to organize their first dance platform (i.e., artist-curated program), he immediately thought of Soul Project.

“It is such an American work,” he says, “and I knew that in terms of its cultural implications it was important that it come to the states. Audiences here will see it so differently from those in other places.”

So how was it? “It was fantastic, but also frustrating, because you want to dance. But David makes it clear that he knows that we want to dance, but we can’t because ‘the dancing is for us.’ It creates a very nice tension: you feel the dance internally but the dancing is happening with his performers.”