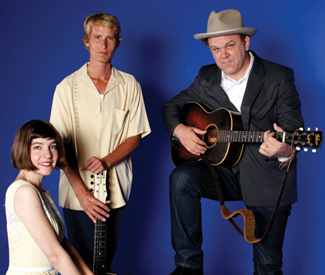 MUSIC He’s an actor so versatile he can handle serious drama (2011’s Carnage and We Need to Talk About Kevin) and screamingly hilarious comedy (especially, but not necessarily, when paired with Will Ferrell). But John C. Reilly is also an accomplished musician, a talent he’s turned into a flourishing side gig that’s now on tour. Read on for Reilly’s best (so far!) musical moments to date.

“Mr. Cellophane,” Chicago (2002) This is where Reilly’s perfectly sculpted, rounded-scoops-of-sherbet cheeks get to shine. They’re buffed up with rosy pink as a dusty clown of a man — poor Amos — makes his way to the spotlight with some downtrodden vaudeville jazz. It’s one of the few slower paced songs in the production — that is, until that fantastic orchestral swell at the climax, Reilly’s voice rising “never even know I’m there…” Not true. Chicago, the musical-turned-movie-turned musical, is likely when mainstream audiences first recognized his true vocal ability.

Walk Hard: The Dewey Cox Story (2007) The whole movie really is Reilly performing music, lampooning dramatic biopics (with particular relish in sending up 2005’s Walk the Line). He does so with humorous aplomb, letting his greasy curled pomp shake vigorously with each Elvis-esque guitar-and-hips swing. The star was even nominated for a Grammy for his performance of the titular song, “Walk Hard.” The lampooner becomes the lampoonee. In an interesting coincidence, songwriter Marshall Crenshaw, who was nominated for a Golden Globe for Best Original Song for writing the “Walk Hard” track — and who years before portrayed Buddy Holly in 1987’s La Bamba — is also in town this week, at Yoshi’s SF Mon/30.

79th Annual Academy Awards, with Jack Black and Will Ferrell (2007) Opening with the tinkling of piano and frequent Reilly co-star Ferrell (holding a rose) crooning “A comedian at the Oscars/is the saddest man of all” alongside Jack Black. More sad clown. Then from the crowd, in a low octave, Reilly sweetly sings back, “You can have your cake and eat it too. Just look at my career!”

Prop 8 — The Musical (2008) Reilly portrays a slick-haired Bible-thumper (“Sodomyyyyy!”) in Marc Shaiman’s mini-musical, a star-studded protest posted to Funny Or Die after the passage of Proposition 8.

John C. Reilly and Friends Despite all the jests and subtle winks, the man can sing. And with his John C. Reilly and Friends group, including Tom Brosseau and Becky Stark (a.k.a. Lavender Diamond), he harmonizes on lovely old-timey country folk. As a true-blue artist, Reilly recently released a few Third Man singles — produced by entrepreneurial troubadour Jack White — including a plucky duet with Brosseau (a cover of the Delmore Brothers’ “Gonna Lay Down My Old Guitar”) and a satisfying match-up with Stark on “I’ll Be There If You Ever Want.” So sweet and twangy, it goes down like cool spiked lemonade on a sticky summer afternoon.