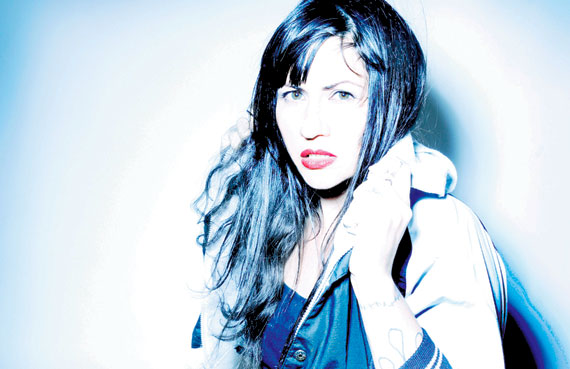 In case you hadn’t noticed, Frankie Rose’s got the Internet goin’ nutz. The 33 year-old has served time in two super buzzy groups of girls (Dum Dum & Vivian) and NYC critical darlings the Crystal Stilts and is about to kick off a tour with Real Estate.

The blogosphere’s thickest rims have been falling over themselves to praise her sparkling sophomore LP, Interstellar (Slumberland, 2012), and on Saturday night, Rose took herself and that buzz (I hear it needs its own van) to a sold-out Brick and Mortar Music Hall for an brief yet enthralling 10-song set.

She was supported by fellow Brooklyn-based dream popsters, Dive, a band with a fair bit of indie cred of its own. Featuring sometime Beach Fossil Zachary Cole Smith and ex-Smith Westerns drummer Colby Hewitt, the group banged out a jangly, wistful set that was heavy on reverb, sepia-tinged melodies, and (just-the-right-kind-of) awful haircuts.

Though watching young men gaze at their shoes is generally a surefire way to kill an early Saturday evening buzz, Smith and his bandmates cut energetic, engaging figures, bee-bopping along with their very blog-friendly, Beach Fossil-y tracks. Judging from this performance and the success of their pre-release singles, I’d wager that we’ll be seeing them headlining their own tour in the coming months.

30 minutes of sweet, easily digestible Dive jams provided the perfect appetizer for Rose’s main course, as she took the stage to rapturous applause. Upon surveying her minions, the diminutive frontperson flashed a sheepish, toothy grin and kicked directly into Interstellar‘s celestial penultimate track, “Moon in My Mind.” Flanked by a lean four-person band, Rose rattled off an incredibly tight set that struck a nice balance between her most recent LP and her 2010 stunner, Frankie Rose and the Outs.

And though her old cuts still sound fresh (“Candy” was a particular stand-out), Saturday night was really a celebration of the triumphant Interstellar. This was most evident during a four-song run that featured “Gospel/Grace,” the title track, “Daylight Sky,” and the undeniable “Know Me” – probably the best four songs on the record.

The run highlighted Rose’s uncanny ability to craft cathartic, introspective songs that are also incredibly danceable and full of pop hooks. She also has a devastating ear for dynamics, especially evident in her gauzy guitar lines. Though simple technically, they add so much depth to the tracks’ bones, which are basically just rock-solid pop-rock songs. Rose didn’t do a ton of talking, but when she did, she showed a humble, disarming sense of humor that made her instantly likable.

Throughout her catalog, Frankie Rose has a keen sense of when it’s time to say goodnight — that the best things are always over too soon — which is why only two of Interstellar’s tracks clock in at over four minutes. So while we all could have probably done with a few more, Rose hopped off stage after only ten songs, signing off with an inspired rendition her most expansive work to date, “Save Me.”

Unfortunately, unlike Spotify, I couldn’t start the whole thing over again, but if I could have, I definitely would have, and I surely wouldn’t have been the only one.