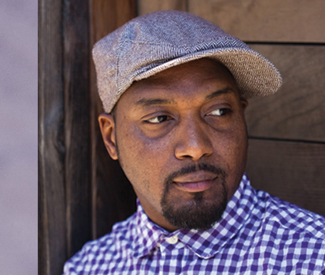 FOOD Veganism isn’t just for rich people. It’s okay to care about what you eat. It doesn’t diminish your commitment to social issues — in fact, it is one.

He just wrote a cookbook that I love, but in his modest home in hills above Fruitvale, food activist and vegan chef Bryant Terry is telling me about class struggle.

“So often, I think that the stories that are told are from young, privileged white kids,” says Terry.

He’s not a young white kid, but he is the epitome of health. Terry’s clean house smells like incense and when I rolled up to the front yard he was gardening in cargo shorts in raised beds of greens. He tells me his beds started a trend — indeed, many of the houses on the block now have a similar vegetal presence.

“Part of my goal is to shed light on other communities that haven’t had much of a voice,” he tells me. If broadening the appeal of healthful cooking is Terry’s goal, then his new book The Inspired Vegan (Da Capo Lifelong Books, 240 pp, $19) is a step in the right direction. Each chapter holds a complete menu with a social justice-related theme. Informative introductions teach about the plant-based, whole food recipes, but the most exciting features are complimentary play lists and reading suggestions that go along with each chapter’s theme. The Inspired Vegan advises you on a lifestyle, not just a shopping list.

Weeks after meeting Terry, I helped host a dinner through the Urban Eating League, a social sustainability project started within the folds of the hyper-educated, environmentally-geared Wigg Party group in the Western Addition. Hosts serve locally-harvested meals, and choose themes to help eaters remember them when it comes time to vote on winners of various honors.

We decided to base the dinner around Terry’s suggestion, his “Detroit Harvest” menu. The recipes pulled their flavor cues from the work of a Motor City nonprofit, Detroit Summer, which started connecting high school students with senior citizens in the early 1990s, young helping old grow produce in their gardens.

My co-hosts and I played the recommended tracks during our meal: Detroit classics like J Dilla, Motown sounds, Aaliyah (yeah, she’s from there). We chatted with the other participants about where they learned about sustainable food systems, what they thought needed to be done to strengthen the good food movement. Few mentioned poor and minority families, but all staunchly believed that the way we eat today will play a big role in what our future will look like tomorrow.

Terry learned about food from his family, from a grandpa whose rows covered a sideyard so large that Terry is reluctant to call it a garden — maybe farm would be a better term for it. He learned early on that growing food could be the basis of independence for African Americans. “Once they decide to stop feeding you, you’re going to starve,” he says simply. He quibbles with the definition of food deserts, saying oftentimes they overlook the DIY kitchen gardening tradition in minority communities.

After going to cooking school “with the express goals of starting a project to help young people,” Terry started b-healthy!, a New York City program that taught kids in poor neighborhoods about healthy eating habits. He counts Edible Schoolyard founder and Chez Panisse icon Alice Waters as a role model. Like Waters, he’s become a national figure, drawing decent crowds across the country to events.

Terry is a realist — he doesn’t believe that everybody needs to be vegan, or a raw foodist, or follow any one nutritional track necessarily. “I’m not that guy. This is someone who understands that we have diverse nutrition needs. To just say that fixing food is going to help resolve issues in these communities — it’s not looking at the bigger picture. If we do have access to healthful foods, that would address a lot of other issues, but we can’t look at food to fix everything.”

It’s not like those raised beds in the front yard are going to save the world. But as far as the sustainable food movement goes, it could do worse than have a mind like Terry’s at its forefront.