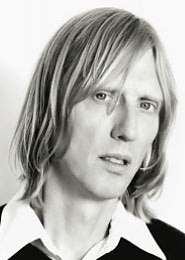 As the guitarist for Hole, Eric Erlandson was at the center of the alternative rock explosion of the early 1990s, a member of one of the most popular and controversial bands of the time, and a friend and confidant to one of the scene’s most influential players, Nirvana’s Kurt Cobain. With the 18th anniversaries of both the suicide of Cobain and the release of Hole’s hit record Live Through This passing this month, Erlandson has just released his first book, Letters To Kurt (Akashic Books) a touching and enlightening collection of prose poems addressed to his departed friend.

During a phone conversation from Los Angeles, Erlandson — who will be appearing at several events in the Bay Area this week — touched on the creative and cathartic process of writing the book, the release of Hit So Hard, a documentary about Hole drummer Patty Schemel, an impromptu on-stage reunion with Courtney Love, and the recent news stories about a supposed Kurt Cobain solo album.

SFBG: Your book “Letters To Kurt” is not your standard rock n’ roll memoir — what was the impetus for going the route that you did?

Eric Erlandson: When I was writing it, I was doubting it and resisting it the whole way through, now when I’m presenting it, I’m still unsure; ‘Is anybody going to get this?’ It is a strange book, it’s not your normal memoir, it’s disturbing to read for me still, so it’s weird to be talking about it in public and reading from it.

I was inspired by Jim Harrison’s book Letters To Yesenin, I started a process in my journal writing out my own letters to people, and then once I let go of my hesitation of using Kurt, the first letter in the book was what came out, and the voice was strong, powerful, and different than anything I’d ever written.

I just kept going with it — when you start writing about the past, the past starts to come back into your life and affect you, and that’s what happened until I got to that 52 number. I thought it felt right, it’s resolved, it’s complete — as much is it can be complete, at this point.

Bringing the issue of suicide on the table, and keeping that as part of it — that’s the bigger picture, it’s not just a book about my views on life, or my relationships, or my ramblings, it’s trying to connect to the universal, that they’re all connected, and that suicide is something that affects us all.

SFBG: The documentary “Hit So Hard” is also getting a wide release this month, and you’ve been appearing at screenings with Patty Schemel — what has it been like seeing your old bandmates again?

EE: Patty’s movie just happens to come out the same time as my book, it wasn’t planned — it was her journey and then my journey. With the fact that they are both being released to the public at the same time, I started to try to put them together at some events.

Patty, Melissa [Auf der Maur] and I played at an event, and from that, it felt so good, it felt like we were back in 1992 in a basement in Seattle playing covers. It just felt really fun, we were free to do whatever we wanted to do, there was no pressure, there was no machine, no business behind us pushing us to do anything, so that was really kind of a liberating experience for us.

If you face the past, if you stop shoving it under the rug, and you start thinking more about what’s happening to your relationships, then you’re able to resolve them, or experiences will happen that will force you to resolve them—or will give you an opportunity to do so at least.

I’m hoping that is where things will go; it can be a positive by-product of the book that I hadn’t even expected.

SFBG: You’ve been away from the mainstream music scene for quite awhile—can fans expect any new music from you in the future?

EE: I’m planning on doing a soundtrack to the book, I just ran out of time, I couldn’t get it out at the same time as the book, but I plan to get it out this year.
That should be really fun, to go back and use all my musical influences and not have it be tied to a band project.

SFBG: There was a flurry of news articles in the last couple of weeks quoting you as saying that Kurt Cobain had recorded a solo album before he died, his “White Album”— were those comments taken out of context?

EE: It was definitely taken out of context, misquoted, and misinterpreted. I think that Courtney had mentioned in like 1995 or 1996, that there was some sort of White Album — or somebody did, I remember hearing it, it’s nothing new to me.

I think the writer chose to present that in a way that there was some hidden gem, or secret being revealed, but there is no secret being revealed, it was me speculating on what I had heard—which is what many people have heard, which is [the song ] “Do Re Mi.” It just had a different mood to it. I was speculating that that’s probably where he was headed, and said something about that White Album comment that somebody had made in the ‘90s — but I was tying it into the topic of suicide, and that’s the thing that he didn’t present in his interview.

I was saying that when someone commits suicide — and I’m not criticizing someone that feels suicidal — by going into that tunnel, and suffering in that way, once you choose to take that huge act of taking your own life, you’re affecting everybody’s lives. This is nothing new, and we all know this, but I was bringing it back to music; by taking your own life, by self-destructing using drugs, by checking out, then you’re taking your gifts away from the world.

I’m not dropping anything that world doesn’t already know. I never claimed that he was making a solo album; I was speculating that if he had continued, he might have made a solo album.

In Kurt’s case, who knows where that music would have gone.