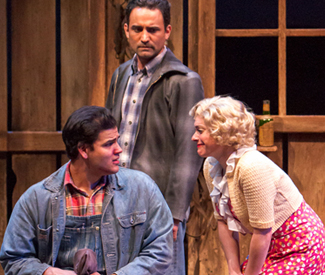 THEATER There’s a clipped Spanish twang in the roughhewn but lucid English of George Milton (Jos Viramontes) and Lennie Small (A.J. Meijer), the iconic bindlestiff protagonists in Of Mice and Men. It’s the only obvious bit of updating in TheatreWorks’ and artistic director Robert Kelley’s generally faithful rendering of the 1937 John Steinbeck classic (a stage adaptation penned by the author himself for a Broadway premiere the same year).

Shoehorning two Latin ranch hands (whose ethnic identity is not remarked upon) into so casually racist an environment naturally demands a little lenience in terms of verisimilitude. But it’s a worthy nod to the overwhelmingly Latino population of migrant farm laborers otherwise crowded out of this tragic if colorful drama of working lives set in the Depression-era Salinas Valley. And it also sets a subtle present-minded tone for a play that, for all its unfashionably heavy dramatic underscoring, probably resonates more strongly with the general plight of working people than at any time since the 1930s.

George and Lennie, social realist cousins of Vladimir and Estragon, are on a migrants’ trail that leads nowhere, while pining for salvation just out of reach: a plot of land to call their own. Their dream is the only respite they’ll get from a desperate system of labor that chews up the bodies it needs and in most cases leaves nothing behind.

An appealing Viramontes plays George, the brains of the pair, as a man a bit too intelligent and proud to stomach this lot easily, but whose world-weariness is kept in check by a compassionate regard for his charge, the overgrown man-child Lennie, imbued by Meijer with the proper balance of childish timidity and wild enthusiasm. Playing ego to Lennie’s id, George uses the tenderly embellished dream of a proper home (with, famously, a rabbit hutch for Lennie to tend) to temper his volatile sidekick, whose innocent propensity to let his sensual appetites run away with him already has them on the run from trouble at their last job in Weed.

Scenic designer Tom Langguth’s silhouette of low rolling hills against a fuchsia sky, fronted by a field of tall grass burned a golden brown by the California sun, provides an initial atmosphere of possibility and, just vaguely, of desolation (the later gently heightened by Jeff Mockus’s spare and spacious sound design). The stage evokes a near Eden, such that we can easily imagine the stream George and Lennie scoop their palms into, just off the lip of the stage, as they prepare to camp for the night in the warm open air. That scene transitions a moment later to the rugged timber construction of the sleeping quarters on a working ranch near Soledad, where George and Lennie join up with a crew of characters lovingly drawn and expertly realized by a fine ensemble cast.

This dip back into society from the trail vexes George and Lennie almost immediately, as the owner’s pugnacious son Curley (Harold Pierce) vies for dominance over the newcomers and everyone else, while chasing endlessly after his desperately lonely new bride (Lena Hart). Even without the threat posed by the local bully — or his wife’s dangerously familiar manner and unstoppable need to find someone to talk to — the men living and working here too readily submit to an everyday pettiness, racism, and sexism that divides natural allies in an exploitative system.

Steinbeck the onetime migrant and journalist informs Steinbeck the artist as a brutish reality becomes a knowing drama — still affecting in its details, if finally watery in its contrived, loudly broadcasted tragedy. Significantly, George and Lennie’s partnership immediately arouses suspicion among the other hired hands. Even for Slim (a sure and compelling Chad Deverman), the ranch’s gracious cowboy hero, two men traveling together is at the very least a source of wonder, so unexpected is the show of mutual support along the otherwise solitary, competitive labor circuit.

But when aging and maimed worker Candy (an excellent Gary Martinez) accepts the mercy killing of his beloved old dog, he and we know the operative social compact isn’t much better: those who have only their usefulness to sell have no foothold when its gone. Candy accordingly latches onto George and Lennie’s scheme, followed soon by another desperate outsider, African American worker Crooks (a wonderfully measured Charles Branklyn). It may prove a pipe dream, but the lure of escape from hopeless drudgery produces a powerful impetus to solidarity that is the play’s enduring hope.

OF MICE AND MEN