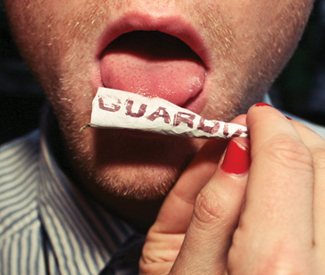 HERBWISE As excited as I was for our Guardian Stoned Soul Picnic 420 party, not everyone in our office was convinced the afternoon at El Rio on Friday, April 20 would pass without incident.

“I’m a little bit worried about getting raided,” said my publisher Bruce Brugmann, towering over my cubicle earlier that day.

Well we weren’t, although swirling rumors of federal agents in the crowd did culminate in slight rudeness directed towards the buzzcutted and be-khakied among us. We celebrated 420 with a free, public party, no one got arrested, and we raised over a thousand dollars for marijuana patient advocacy — $1,092, drummed up through a raffle featuring prizes from all kind of local businesses and El Rio’s generous bar charity. Owner Dawn Richardson says the total was the most money for charity ever generated in the bar during that particular time period.

This had to be the weirdest party ever — reggae and soul music both, from Mr. Lucky of I&I Vibrations and Carnita of Hard French, respectively. Then there was the pickled apples and bacon lovingly stacked in Hot Bike’s grilled cheese sandwiches. The boys from Roughneck Skateboards self-started to create a limbo game made out of paper mache joints. And four stand-up comedians bravely assumed the stage towards the end of the afternoon. We even had free pastries.

There were old folks in motorized wheelchairs, tough guy stoners on the side, a ton of pretty people that showed up just to dance and be stoned on a sunny patio in 70-degree weather. If ere there was an advertisement for the broad swath of San Franciscans that support medical marijuana, this was it. And we did good — look Bruce, no handcuffs!