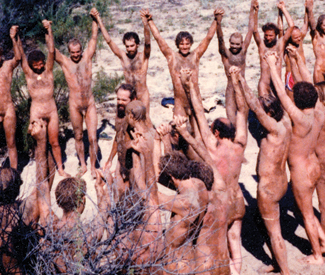 VISUAL ARTS With Occupy gearing up again and a fresh round of election hell full upon us, another cycle of protest — and the urge to engage with the problems of the world while somehow escaping them — is in the air. The Oakland Museum’s current “1968 Exhibit” (through August 19) offers a family-friendly, multimedia trip through the Bay Area’s most famous political and cultural upheaval. But here are three ongoing shows that look closely at individual creators from the past whose work transcends nostalgia, transmits a fair amount of beauty, and drums up some idealistic lessons for the present.

A miracle to inspire cafe artists everywhere. In 1964, 23-year-old NYC photographer Arthur Tress winged through San Francisco for a season, shooting the populace at a particularly turbulent time: the Republican National Convention, the Beatles’ first North American tour, auto worker protests along Van Ness, the passage of the Civil Rights Act. He developed the negatives in the communal darkroom off Duboce Park, had an unremarkable show in the back of a cafe, packed the photos up at his sister’s, and moved on. After his sister died, he found them in a box of her effects, and realized their significance.

And what a find: Forget Mad Men, this is the real 1964, perched on the edge of a cultural unraveling, its existential beehive slowly loosening into flower child ideals. The 70 photographs on show at the de Young, curated by James Ganz, expertly play with composition to bring rough social patches to artful life. A distorted shot of a George Romney presidential campaign poster delivers Orwellian chills. Screaming girls hoisting “Ringo for President” banners intimate repressed political hysteria. Dashing union workers form impressive phalanxes. Patrons at a Fifth and Market diner embody an microcosm of economic disillusionment. A transgender woman suns her hairy legs on the Embarcadero, a plaid-shirted boy holds up a hand-drawn hammer and sickle.

All of it coated with the glamour of deconstructed nostalgia, in which one can indulge and critique at once. But there’s more: “You have throw into the mix a heavy dose of social commentary and criticism — the idea that the photograph can be a vehicle for social change,” Tress tells an interviewer in the show’s handsome if carelessly annotated catalogue. “You photographed street demonstrations, you photographed protests … it was a way of becoming part of the movement.”

“THE UTOPIAN IMPULSE: BUCKMINSTER FULLER AND THE BAY AREA”

Inside the great Henry Ford automotive museum just outside of Detroit, you can tour an actual Dymaxion House, designed by preternaturally productive designer, philosopher, and dissembler R. Buckminster Fuller. It’s as perfect a realtime experience of walking around in someone’s 1940s sci-fi Utopian dream as one can ever have. A polished aluminum mushroom cap subdivided into tiny rooms bursting with ingenious “squee!”-worthy gadgetry to handle all of life’s projected needs, the Dymaxion House never took off as vernacular American architecture, despite its supposed ease of construction, light weight, and good intentions to house an expanding population. (Among its bland nemeses: rain, expense, and snarky architecture critics.)

But while it’s particularly poignant to see this polished dream deferred nestled among the many wheeled ones populating Henry Ford’s shrine to the former glories of the Motor City — and even though geodesic monument Spaceship Earth at Disney’s Epcot, another eerie graveyard of sleek Utopian ideals, remains Bucky Fuller’s only famous American architectural manifestation — the Dymaxion concept, and several other Bucky wonders, have had a profoundly positive and energizing effect on the Bay Area, as this visionary show at the SFMOMA reveals.

Curator Jennifer Dunlop Fletcher forewarned, “To be clear, it’s not so much a show about Fuller.” Indeed, but in the first rooms prepare to be blown away by gorgeous blow-ups of Massachusetts-born Bucky’s hyper-geometric blueprints, which will surely provide several indie electro bands with album cover inspiration for years to come, and a wall of insanely detailed notecards from “Everything I Know,” his late-life video-recorded brain dump.

Then the real magic of the show kicks in, as it opens up into displays of Bay Area movements and products directly traceable to Fuller, from glorious hippie artifacts like the Ant Farm architecture collective, the Whole Earth Catalog scene, and the iconic North Face “Oval Intention” dome-shaped tent (really!) to contemporary tech initiatives, like bright neon specimens from the “One Laptop One Child” campaign and the utterly transfixing “Local Code” by UC Berkeley Assistant Professor Nicholas de Monchaux, which digitally renders the transformation of all the unused public space in SF into “a common ecological infrastucture.”

Beyond reviving interest in Fuller, the ambitious project of SFMOMA here is to showcase the deep connection between the Bay Area’s brilliant tech legacy and its transcendental communal one, an audacious, successful synthesis that would bring Bucky joy — and one that only a full-size recreation of Steve Wozniak’s garage could probably best.

Harry Hay seemed to drop almost effortlessly into so many essential 20th century ideal-driven environments — Hollywood, unions, the Communist Party, gay rights, naturism, really the list goes on. That this modest show at the SF Main Library, curated by Joey Cain, not only clearly distills Hay’s timeline and influence, but also manages to illuminate new corners of his life and sometimes bring on a few tears, is rather a sensation.

Seriously, the man was multitude. Hay is best known as the founder of one of the first gay rights organizations, the Mattachine Society — here revealed through documents, org charts, and touching photos to have been a sort of Moose Lodge for “homophiles.” In one of the show’s most astounding touches, the exquisite Edwardian tea set used by his mother Margaret to caffeinate the early Mattachine meetings is displayed in full.

But of course there was more for this Mad Hatter, including pleading the Fifth before the House Un-American Activities Committee in the 1950s for his Communist party membership and Marxist musicology studies, his 1930s radicalizing tryst with actor and union supporter Will Geer, a.k.a. Grandpa from The Waltons, the “Circle of Loving Friends” desert commune, the national campaign to stop the damming of the Rio Grande — all laced through with references to underground SF gay clubs and arts happenings. (Some things, like his controversial early support for NAMBLA, which could benefit from some honest contextualization, seem glossed over, perhaps due to space concerns.)

Hay’s creation in the 1970s of the Radical Faeries, a collective whose anti-assimilationist, Pagan aesthetic continue to influence and inform Bay Area style, is well-represented here, as is perhaps Hay’s most stable pursuit: his loving 40-year relationship with John Burnside. Two seemingly politically contradictory Utopian ideals, embodied in one mercurial spirit, revealed beautifully.