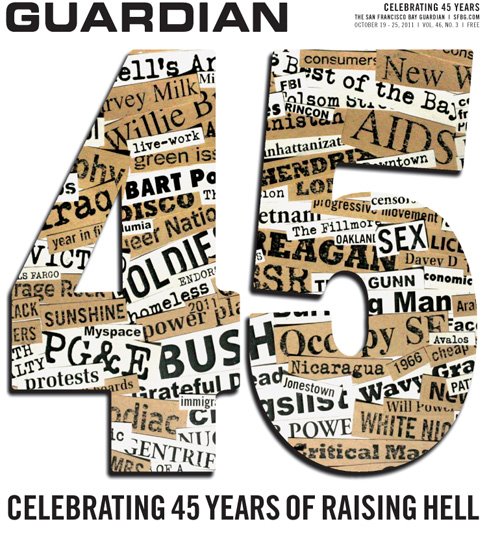 After 45 years of “printing the news and raising hell” — and contributing significantly to the cultural and political vibrancy of the Bay Area — Bay Guardian co-publishers Bruce Brugmann and Jean Dibble are stepping down from day-to-day operations at the paper.

Under their leadership, the paper – which started in 1966 as a 12-page “fortnightly journal of news, analysis and opinion” – has grown to be one of the premier alternative newsweeklies in the nation and an undeniable part of San Francisco.

This transition is connected to ongoing exclusive negotiations with a subsidiary of The SF Newspaper Company LLC to purchase all assets related to the the Guardian publishing operations. SFN also owns and publishes the San Francisco Examiner. Both parties are optimistic that a final contract will be signed shortly, most likely in May.

There are no plans to change the editorial content or positions of the Guardian, which will remain the voice of progressive politics and alternative culture in San Francisco. Executive Editor Tim Redmond will stay on in the expanded role of executive editor and publisher.

Bruce and Jean will remain involved in the paper in a consulting role. The famous “Bruce Blog” will continue uninterrupted.

Todd Vogt, president and publisher of the Examiner, said he was proud to be able to help a community institution continue with its mission. “Bruce and Jean have created a legendary publication, and we are happy to be able to give it a new home and the chance to continue its mission.” He said that the two papers will remain separate and distinct in most ways, although “the potential synergies will be beneficial to readers and advertisers.”

SFN bought the Examiner in December, 2011.

Redmond said: “Todd Vogt is a San Francisco resident who believes in and cares about newspapers, and we’re thrilled to be working with him to preserve and build on the Guardian’s legacy.”