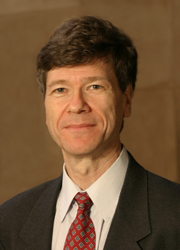 Jeffrey D. Sachs is Professor of Economics and Director of the Earth Institute at Columbia University. He is also Special Adviser to United Nations Secretary-General on the Millennium Development Goals
NEW YORK – The annual spring meetings of the International Monetary Fund and the World Bank have provided a window onto two fundamental trends driving global politics and the world economy. Geopolitics is moving decisively away from a world dominated by Europe and the United States to one with many regional powers but no global leader. And a new era of economic instability is at hand, owing as much to physical limits to growth as to financial turmoil.

Europe’s economic crisis dominated this year’s IMF/World Bank meetings. The Fund is seeking to create an emergency rescue mechanism in case the weak European economies need another financial bailout, and has turned to major emerging economies – Brazil, China, India, the Gulf oil exporters, and others – to help provide the necessary resources. Their answer is clear: yes, but only in exchange for more power and votes at the IMF. As Europe wants an international financial backstop, it will have to agree.

The underlying reason is not difficult to see. According to the IMF’s own data, the European Union’s current members accounted for 31% of the world economy in 1980 (measured by each country’s GDP, adjusted for purchasing power). By 2011, the EU share slid to 20%, and the Fund projects that it will decline further, to 17%, by 2017.

This decline reflects Europe’s slow growth in terms of both population and output per person. On the other side of the ledger, the global GDP share of the Asian developing countries, including China and India, has soared, from around 8% in 1980 to 25% in 2011, and is expected to reach 31% by 2017.

The US, characteristically these days, insists that it will not join any new IMF bailout fund. The US Congress has increasingly embraced isolationist economic policies, especially regarding financial help for others. This, too, reflects the long-term wane of US power. The US share of global GDP, around 25% in 1980, declined to 19% in 2011, and is expected to slip to 18% in 2017, by which point the IMF expects that China will have overtaken the US economy in absolute size (adjusted for purchasing power).

But the shift of global power is more complicated than the decline of the North Atlantic (EU and US) and the rise of the emerging economies, especially the BRICS (Brazil, Russia, India, China, and South Africa). We are also shifting from a unipolar world, led mainly by the US, to a truly multipolar world, in which the US, the EU, the BRICS, and smaller powers (such as Nigeria and Turkey) carry regional weight but are reticent to assume global leadership, especially its financial burdens. The issue is not just that there are five or six major powers now; it is also that all of them want a free ride at the others’ expense.

The shift to such a multipolar world has the advantage that no single country or small bloc can dominate the others. Each region can end up with room for maneuver and some space to find its own path. Yet a multipolar world also carries great risks, notably that major global challenges will go unmet, because no single country or region is able or willing to coordinate a global response, or even to participate in one.

The US has shifted rapidly from global leadership to that kind of free riding, seeming to bypass the stage of global cooperation. Thus, the US currently excuses itself from global cooperation on climate change, IMF financial-bailout packages, global development-assistance targets, and other aspects of international collaboration in the provision of global public goods.

The weaknesses of global policy cooperation are especially worrisome in view of the gravity of the challenges that must be met. Of course, the ongoing global financial turmoil comes to mind immediately, but other challenges are even more significant.

Indeed, the IMF/World Bank meetings also grappled with a second fundamental change in the world economy: high and volatile primary commodity prices are now a major threat to global economic stability and growth.

Since around 2005, the prices of most major commodities have soared. Prices for oil, coal, copper, gold, wheat, maize, iron ore, and many other commodities have doubled, tripled, or risen even more. Fuels, food grains, and minerals have all been affected.  Some have attributed the rise to bubbles in commodities prices, owing to low interest rates and easy access to credit for commodity speculation. Yet the most compelling explanation is almost certainly more fundamental.

Growing world demand for primary commodities, especially in China, is pushing hard against the physical supplies of global resources. Yes, more oil or copper can be produced, but only at much higher marginal production costs.

But the problem goes beyond supply constraints. Global economic growth is also causing a burgeoning environmental crisis. Food prices are high today partly because food-growing regions around the world are experiencing the adverse effects of human-induced climate change (such as more droughts and extreme storms), and of water scarcity caused by excessive use of freshwater from rivers and aquifers.

In short, the global economy is experiencing a sustainability crisis, in which resource constraints and environmental pressures are causing large price shocks and ecological instability. Economic development rapidly needs to become sustainable development, by adopting technologies and lifestyles that reduce the dangerous pressures on the Earth’s ecosystems. This, too, will require a level of global cooperation that remains nowhere to be seen.

The IMF/World Bank meetings remind us of an overarching truth: our highly interconnected and crowded world has become a highly complicated vessel. If we are to move forward, we must start pulling in the same direction, even without a single captain at the helm.

Jeffrey D. Sachs is Professor of Economics and Director of the Earth Institute at Columbia University. He is also Special Adviser to United Nations Secretary-General on the Millennium Development Goals.