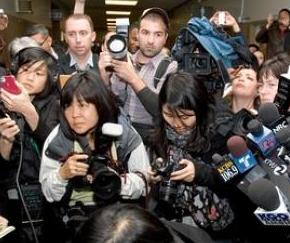 I appreciate that everyone is doing his or her best to dialogue on the very complicated, nuanced and difficult issue of domestic violence in a context where the press and politicians are doing their best to use the issue for their own agenda and making it a very polarizing issue in the media.

I know that many of us confront this issue at work, and  most encounter it in our own personal lives, so it is a very emotionally charged issue.  My heart goes out to Eliana Lopez, their son Theo, and yes, Ross.  As a practicing Buddhist, I find that people are often unwilling to forgive others, like Ross, because they are unwilling to forgive themselves for their own challenging impulses.

Myrna Melgar, a survivor of domestic violence, wrote a very thoughtful piece for the SF Bay Guardian on restorative justice as an alternative to the criminal justice response to domestic violence, and if you get a chance, take a moment to read it.
http://www.sfbg.com/bruce/2012/03/27/guardian-op-ed-domestic-violence-latina-feminist-perspective

For me, the main question she poses is:   “How did it come to be that a system that was intended to empower women has evolved into a system that disempowers them so completely?”  In short, when Ross grabbed her arm, it became a media/political frenzy that destroyed Eliana’s life.  Myrna posits that the increased criminalization on low-level, first offenses of domestic violence on this one immigrant woman, Eliana Lopez, meant that a long list of mostly men spent the next few months making decisions on her behalf without her input as she was treated as incompetent to make decisions.

I am a survivor of domestic violence as a child, and it has been painful to me to observe people using a family’s pain for their own political agendas and missing this opportunity to do things differently, There could have been a path where the powers that be could have acted with integrity towards this family, our city, and to all the survivors of domestic violence.  Instead, the whole situation was manipulated from beginning to end.

Honestly, no “side” has been perfect.  Those that are loyal to Ross seem unwilling to hear anything beyond how people are out to “get” him, and those that are against him, well, most of the resources against Ross are from a “side” that has all the social capital, resources, media,  and political power at their disposal which leaves me frustrated with those who are supposedly holding him accountable.

As it relates to Ross being sheriff, it’s clear that the system for accountability has also broken down and no one trusts what is happening in the courts. And as one observer has written, “Are we considering the public punishment that has already been heaped on both Ross and Eliana? Was Mirkarimi’s act so vile that we don’t allow him a chance to attend domestic violence treatment and redeem himself before ruining his life?  I’m not defending domestic violence in any way, shape or form, but I do believe this situation has been badly politicized.”

It’s unfortunate.  It leaves me with little hope that justice will be served. I have long been a proponent of restorative justice, and now more than ever in my life, I see the power of taking full responsibility for my actions, for our actions.  I’m so sorry the road to healing and restoration was not taken in this case.

Gabriel Haaland is a survivor of domestic violence, and a queer, transfeminist man who sits on the San Francisco Democratic County Central Committee.