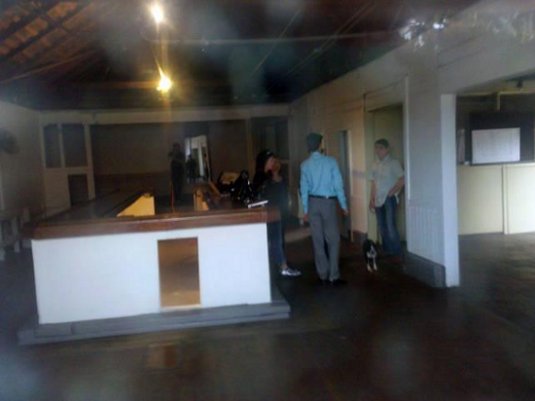 What’s more emotionally hair-raising than tonight’s “appearance” by DJ Pauly D at the Sound Factory? The pic accompanying this post of the scrubbed and painted Eagle Tavern that surfaced on the Internet this week — I saw it via drag queen politico Anna Conda. The Eagle closed last year — it was an actually legendary hangout for leather biker queers, and straight scruffy friends, into amazing rock music courtesy of DJ Don Bard at Sunday beer busts and a passel of live bands on Thursdays. It closed amid controversy, confusion, and stalled protest efforts, but now It does indeed look, in the words of one commenter, like, “My memories have been raped by a poorly designed condo kitchen.” (I hate rape jokes, unless they’re hilarious.)

But as another astute commenter commented, “While the physical space that was the Eagle is no longer, the people that made the atmosphere, the experience, the adventure, and the tradition are still with us. Let’s focus on the people and look for new space.” Amen. The monthly Eagle in Exile beer bust at El Rio is doing great, and although we’ve yet to achieve something weekly, I kind of think a little break for my liver on Sunday afternoons (and a chance to explore some other venues) has been a good thing. But I do miss hanging with my manly-man, non-gym queen homies, getting turned on to musical gems like this — and this pic brought on a lot of memories, as well as Crate and Barrel nightmares.

Enough of that, let’s 4/20 party! Of course you are going to the Guardian’s Stoned Soul Picnic party this afternoon-evening at El Rio, followed by a Red Hots Burlesque marijuana tribute night right? Here are some other goodies for later (and read about even more parties in this week’s Super Ego column and even more in our Herbwise column):

>> DOC MARTIN + J-BOOGIE
Cali’s most beloved rave legend DJ Doc Martin, whose sets can encompass classic house woo-woo, intricate techno, and deep funk (he’s been on fire in the past couple years especially) will join SF’s multitalented jazzy-funk producer J-Boogie’s live band Dubtronic Science at Yoshi’s Fillmore to “combine electronic dance music with live instrumentation, progressing the tradition of jazz improvisation in the Fillmore.” This sounds really cool. Below is one of J-Boogie’s smooth recent joints that’s been popping up everywhere lately. What might Doc Martin do with it?

>> JOEY NEGRO
The UK dance hero, also known as Dave Lee, ruled much of the late 80s to early 00s: he was one of the first to infuse overt disco samples into house, and his productions and remixes like the below really did save my life on numerous occasions. Classic, classic, classic.

>> SOUTH RAKKAS CREW
SOM Bar is gonna be keeee-razy on 4/20 with a ton of booming’ future-dancehall and global bass music from this Mad Decent crew, plus incredibly diverse supporting players Kush Arora (perfect for today!), DJ Sep, Daneekah, Bootyklap, and the always slayin’ it Slayer’s Club players. Light up and get low.