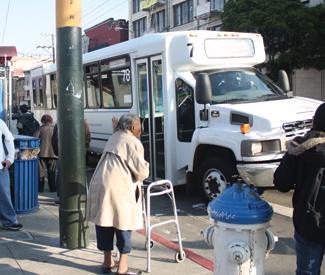 If you’re used to riding to work on a crowded, lurching Muni bus that arrives late and costs too much, consider this: Some San Franciscans commute on 50-foot luxury coaches with cushioned seats, wifi, air conditioning and mini television screens. The state-of-the-art vehicles arrive on time — and the service is free.

The buses aren’t regulated by the city and pay nothing for the use of public streets. But these giant private beasts freely and without penalty stop in the Muni zones, clogging traffic, and sometimes preventing the city’s buses from loading and discharging passengers. They barely fit through narrow corridors in neighborhoods like Noe Valley and Glen Park.

City officials agree the fleets of private commuter buses have created a problem — but so far, they’ve done nothing about it.

And most people don’t realize that some of these luxury bus lines are, in effect, open to the public.

The buses primarily serve the city’s growing status as a Silicon Valley bedroom community, carrying commuters to and from the corporate campuses of places like Genentech and Google.

Private shuttle buses have been booming in San Francisco. Genentech has more than 6,000 employees registered in commute programs on 56 routes. Google’s Gbus service transports more than 3,500 daily riders on more than 25 routes, with about 300 scheduled departures. Then there’s Zynga, Gap, California College of Arts, Apple, Google, Yahoo!, and Academy of Art. And the University of California, San Francisco has its own fleet of 50 shuttles.

The good news is that the buses take cars off the road, giving tech workers a much less environmentally damaging way to get to work. Google’s transportation manager, Kevin Mathy, noted in the GoogleBlog that “The Google shuttles have the cleanest diesel engines ever built and run on 5 percent bio-diesel, so they’re partly powered by renewable resources that help reduce our carbon footprint.” He continued, “In fact, we’re the first and largest company with a corporate transportation fleet using engines that meet the Environmental Protection Agency’s 2010 emission standards.”

But nobody at City Hall has any idea how many total buses are running on the San Francisco streets.

Jesse Koehler, a planner at the city’s transportation authority, conducted a study on shuttles that identified a number of problems, most linked to a lack of local regulation.

Requested by then-Supervisor Bevan Dufty, the study, completed in 2011, found that, while shuttles play a valuable role in the overall San Francisco transportation system, there’s little policy guidance or management. In fact, there’s no local oversight, the study found: Shuttle operators are licensed by the state, but the California Public Utilities Commission is mostly concerned with the safety of the equipment and the licensing of the drivers. Local concerns aren’t under the agency’s purview.

And there are plenty of reasons for local concern. Under city law, only Muni buses are allowed to pull over and use the designated bus stops — but Koehler reported, “Shuttles are generally also using these Muni bus spots. Some cases prevent Muni buses from entering the Muni bus zone and having the passengers board late.”

The study notes that “the large majority (approximately 90 percent) of shuttle stops occur at Muni bus zones.” The shuttles take much longer to load and unload than Muni buses (because of their size and the lack of a rear door) and often force the public buses to wait, delaying routes, or to pick up and discharge passengers outside of the bus zone, creating a safety problem.

Local residents surveyed had their own complaints. The study quotes critics saying that “the shuttles can be noisy, especially at night when there isn’t much other traffic or when they are the kind with diesel engines” and “large coach shuttles are noisy on small neighborhood streets.”

Muni routes are designed with the city’s neighborhoods in mind; you don’t see the extra-long articulated coaches that ply Mission Street and Geary Boulevard cramming themselves into the much-tighter and more residential streets of Potrero Hill, Noe Valley, Glen Park and the Castro. That’s not a concern for the giant corporate shuttles; they go where they want.

That can cause problems for pedestrians, bicyclists and drivers who aren’t used to seeing these long, tall buses, which at times take up both lanes, squeezing through turns with barely an inch to spare.

And while Muni drivers are far from perfect, the shuttle safety records are even more of a concern. In November of 2010, a UCSF shuttle bus struck and killed 65-year-old Nu Ha Dam as she was crossing Geary Street at Leavenworth Street. Not even a year later, another UCSF shuttle was involved in a collision, killing Dr. Kevin Allen Mack and injuring four other passengers. A witness confirmed that the shuttle ran a red light.

On February 14, a pedestrian crossing Eddy Street at Leavenworth in the Tenderloin was run over by a paratransit van. The victim was pinned under the shuttle for 20 minutes until he was finally rescued. The victim lived, but suffered several broken bones.

But, she noted, “Because they are relatively new, and a growing one at that, there is really a need to work together between the city and shuttle providers to make sure that our policy framework is supporting shuttles and also working to avoid conflict with shuttles and transit, pedestrians, and bikes.”

Paine noted: “What we’ve heard is that there are places where shuttles do have conflict with other uses and then there are places that work really well, so one of the things we want to find out in those areas where spaces are being shared successfully, is what’s happening.”

Elizabeth Fernandez, press officer at UCSF, said the city doesn’t have any specific rules regarding transit systems like UCSF’s. “With the proliferation of corporate services throughout the city, there are several studies that are ongoing,” she said. “These studies are an attempt to manage the growth of these kinds of shuttle services in regards to volume as well as routing, staging, and parking.”

Tony Kelly, a Potrero Hill community activist, said the root of the problem is the consistent cut in Muni service over the past 20 years. “Potrero Hill is going to double population in the next 15 years,” he said. “People and new housing units are doubling.

“When all the shuttles are in our bus stops, everyone is wondering why we can’t ride these things,” he said. “Why can’t they take it when there is so much unused capacity?”

Actually, I rode several UCSF shuttles around the city, and nobody ever asked for identification.

I was picked up at the Muni stop on Sutter St. at the UCSF Mt. Zion Campus (yes, the shuttle pulled — illegally — into the Muni stop to pick up passengers). Fernandez told me the school’s official policy states that “Riding UCSF shuttles is restricted for use by Campus faculty, staff, students, patients and patient family members, and formal guests.” But when I boarded, the driver made no attempt to verify if I was associated with UCSF. I did a full trip, passing through the UCSF Laurel Heights Campus, and then back to Mt Zion. There were no more than seven people on the shuttle, and about 20 seats available for riders. There are also handrails for standing if the bus ever gets too crowded.

I also hopped a Genebus at Glen Park BART and rode to company headquarters in South San Francisco. Again, nobody asked for ID; in fact, Genentech spokesperson Nadine O’Campo said the company is happy to let others who work in the area hitch a ride on the cush coaches.

For information on the Genenbus routes and schedules for the Millbrae bus line, go to www.caltrain.com and look under “schedules.” UCSF also provides shuttle schedules and route maps at www.campuslifeservices.ucsf.edu under transportation. For general information on shuttle providers that provide service from and to BART, visit www.transit.511.org and go to Transit Provider Info.

Riding on these shuttles is an entirely different experience than riding on the Muni. People are friendlier, the buses are clean, the seats were nicer, and the transportation is a lot faster.
A UCSF student on the shuttle, commutes using the BART from South San Francisco to 16th and Mission to take a shuttle to UCSF. She said it’s far better (and cheaper) than driving — and while Muni costs $2, the shuttles are free.

The downside of that, of course, is that some of the shuttles are bleeding off Muni patrons, and riders of other public systems, in effect stealing customers, and thus robbing the transit system of fares. They’re also another example of the privatization of what were once public services. Instead of working with the city and the region to improve transit for everyone, these tech firms have decided to create a private system of their own..

And that may be the most disturbing trend of all.