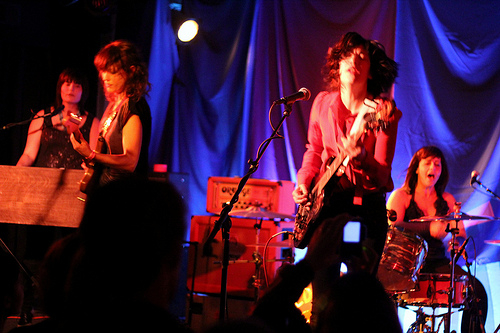 San Franciscans faced a sort of litmus test Wednesday night: which popular band would they see live when given copious quality options, what does that say about their whole being, and who among us chose best? Thanks to Coachella and just lucky circumstance, there were major acts playing sold out or close-to-it shows all around town last night: Godspeed, Gotye, Refused, and Wild Flag.

So the city split open. Shows were carefully chosen based on sound, legacy, fun-factor, and proximity. Massive carved doors swung open, and venues were crowded on this refreshingly warmish midweek night. We’ll have more on the other offerings about town. But here’s what went down at the Fillmore.

3. Janet Weiss’ showy drum solo during “Glass Tambourine.” Had there been such an item, it would’ve shattered into tiny glittery bits.

6. The song “Racehorse” played before “Romance,” and being about not being able to love another. “You can’t love no one/you don’t love know one.”

7. “None of those other songs were about love, but this one is” — the introduction to final pre-encore song and fan favorite, “Romance.”

9. Timony’s feedback fetish, and the moments when she crumbled to her knees in showmanship.

10. Brownstein holding her guitar straight up in the air, in another statement on instrument worship.

13. The DC/Portland based band again using its encore for awesome covers, including Television and Fugazi. Though no Misfits this time unless I missed it. Did I miss it?

14. The feeling that this band will undoubtedly go down in history as shattering preconceived notions of femininity, musicianship, and rock’n’roll, just as its predecessors Sleater-Kinney and Helium.

15. Supposedly, Fred Armisen was there, which make sense as he and his Portlandia co-star, Brownstein, were at a 826 Valencia benefit earlier in the day.