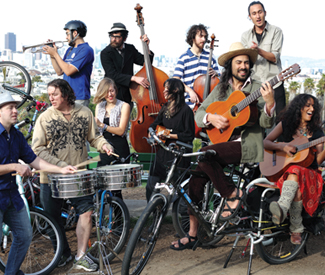 MUSIC While Rupa Marya of Rupa & the April Fishes and Gabe Dominguez of Shake Your Peace are crossing their fingers for cloudless, sunny days ahead during their joint week-long bicycle trek around the Bay Area, in some ways, they were brought together by a storm.

It was a storm both physical and figurative: the scattered downpours during their first encounter at the now-dispersed Occupy SF campsite at Justin Herman Plaza last November (11.11.11) during the Occupy Music Festival — where both bands played — and, the subsequent storm of ideas that lead to the bike tour agreement.

“So it was kind of like the perfect storm,” says Dominguez, sitting next to Marya in the Nervous Dog Coffee cafe on Mission Street in early April. “It was an auspicious day,” Marya later adds. “Oh my god, what a day.”

The fruit of that brainstorm, the Bay Rising Tour, will kick off tomorrow at Stanford University, with the ragtag bicycle caravan of around 15 core riders heading counterclockwise around the Bay, stopping in nine cities over 10 days, playing both conventional music venues and guerillas art spaces. The musicians on bikes piled high with gear will turn their final corner on to Divisadero to play the Independent April 28.

Marya and Dominguez had walked into the Nervous Dog that afternoon smiling, bubbling with expectations of the impending tour. The two are clearly platonically smitten with another other’s passion for social justice, global music, and good old-fashioned bike fun.

As Marya nibbles an empanada from the cafe, Dominguez continues their story. “We made the connection that both of our bands make multicultural dance rebel music, rock music for the ecotopian revolution. Bicycles, bioregionalism, now being the time — it all just coalesced.”

One key difference that’s soon to evaporate: Shake Your Peace has done many bike tours, but this will be Rupa & the April Fishes’ first (though they’ve done some trial runs in preparation).

Along with leading Shake Your Peace, and playing in Tiny Home with his girlfriend, Sonya Cotton, Dominguez is a co-founder of the yearly Bicycle Music Festival (since 2007) with Paul Freedman, who too plays a role in the Bay Rising Tour.

Along with those mentioned, the tour will roll to A Place for Sustainable Living in Oakland for an Earth Day party (with food cooked by Marya’s urban farmer brother), a Beaver Liberation show in Martinez, and a Glen Cove ceremony by Ohlone Leaders in Vallejo.

Out on the road between venues, the caravan has three transportation strategies: people carrying their own instruments on bicycles, those packing larger instruments like guitars on Xtracycles — an Oakland company that sells an extension for the back of the bike — and lastly, a few riders on electric-hybrid bikes carrying six-to-eight foot trailers.

They also are encouraging other cyclists and Bay Area residents to come along for the day rides between shows — to help map out the flattest routes. There’s a real community effort feel to the plan.

“In the wake of where we find ourselves right now, economically, sociopolitically, we can’t wait for someone to hand us the reality we want. We have to build it, we have to create it. And that’s what’s so exciting about this way of touring,” Marya says.

Both bands make the kind of music that invites interaction and discussion, so an interactive tour, flipping the tradition of a clear separation between artist and audience, seems the right direction.

Rupa & the April Fishes — now wrapping up their third studio album, Build — have long been fixtures on the global music scene, a Bossa nova bumping mix of Brazilian, Indian, Latin, and French influences, sung in three languages. While based out of San Francisco, they’re often out exploring the world, most recently Chiapas, Mexico; Amsterdam; and Athens, Greece.

Shake Your Peace started out in New York as folk trio, but now “Shake Your Peace 2.0” makes a style of music that Dominguez has dubbed “whup” — a melding of Afro-Latin beats with bluegrass instruments such as fiddle, and gospel harmonies.

“W-H-U-P, it’s a celebratory spirit with a philosophy, a political approach,” Dominguez explains excitedly. “We’re not just fighting for better wages, we’re fighting for life. It’s the spirit of your heart kicking. The scream when you come out of the womb. Life, yaow!”

He appears equally amped on the Bay Rising tour itself, adding again that others should join the rides with the bands — “they’re welcome to experience this rolling summer camp with us.” And they’ll both be Tweeting their locations along the way for the day rides.

As the effusive conversation in Nervous Dog comes to a close, Dominguez and Marya are still talking about the logistics of the trip, including where they’ll crash at night, and the importance of gathering tarps to cover all their gear, just in case of bad weather.

With Rupa & the April Fishes, Shake Your Peace